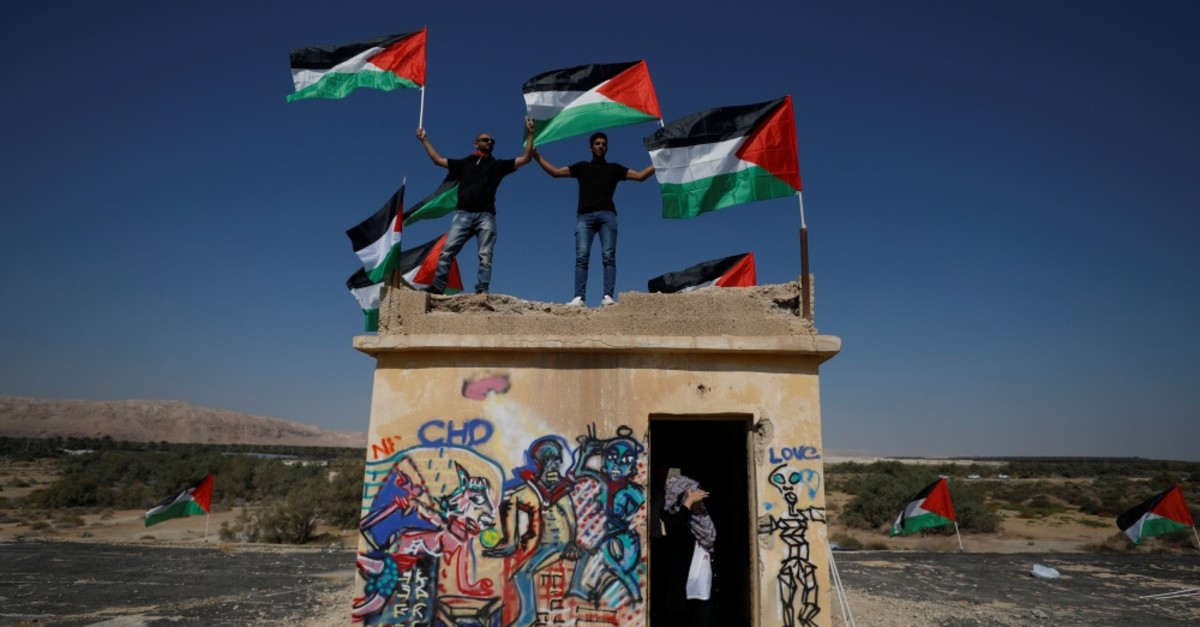 Demonstrators hold Palestinian flags during a protest against Jewish settlements, near the Dead Sea in the Israeli-occupied West Bank, Sept. 28, 2019.
by Najla M. Shahwan Oct 03, 2019 12:00 am

The Israeli state continues to violate international law and diplomatic norms as it expands its occupation in the West Bank, using force against Palestinian civilians

The Haaretz daily has reported that Israeli army lawyers recommended, "individual Jews should be allowed to buy private land" in the occupied West Bank, an attempt being described as "revolutionary."

The article states that the Israeli Defense Ministry and military legal advisers have passed their opinions to Deputy Attorney General Erez Kaminitz, "who is expected to confirm them with the backing of Attorney General Avichai Mendelblit."

The bill specifically seeks to amend an existing Jordanian 1953 law that prevents non-Arabs and foreigners from directly purchasing land in the West Bank. Though that law has remained on the books for decades, a 1970 injunction passed by the Knesset has allowed companies registered in the West Bank to purchase property regardless of ethnic or national identity, effectively creating a loophole that allows Jewish Israelis to purchase property in the occupied area.

The bill would dramatically change how land is purchased in Area C that represents around 60% of the West Bank's territory.

Following the Oslo Agreements Israel was to maintain a full military occupation of this area for five years, before handing it over to the Palestinian Authority (PA). However, to this day, Area C is still under a full Israeli military occupation and heavily saturated with more than 600,000 illegal Israeli settlers in the area.

In the past, Israeli settlers tried to gain control of land by using some companies and forged documents, but as this route passes through bureaucratic stages and procedures; this would be avoided if the government adopts the new legal opinions.

However, the new proposed bill would allow anyone the direct purchase of land in Area C of the West Bank, a dangerous move that would make it easier for settlers, backed by huge Jewish financial aid to acquire more lands at the expense of Palestinians.

While the Israeli Defense Forces (IDF) legal adviser warned of potential diplomatic repercussions over such a move, the Israeli Defense Ministry adviser called for implementing this recommendation, claiming that it would not mark a radical change from the current legal situation.

Since the Oslo agreement

Israel has been trying to grab lands from the occupied Palestinian Territories since Oslo by different illegal means and twisted laws.

"We are convinced that it is possible to effectively cancel the existing distinction in Jordanian law between a person of Arab origin and one who isn't," wrote Maj. Zvi Mintz, head of the IDF's legal consultation department for Judea and Samaria, according to the Haaretz report.

"The ban on real estate deals on the basis of ethnicity raises certain discomfort." He also said Israel could justify the law change using a Geneva Convention article that allows for the cancellation of racist or discriminatory legislation.

Mintz mentioned that international law only allows Israel to issue decrees benefiting the local population in areas subject to military rule, the report said. However, he added, Mandelblit could approve a legal definition of West Bank settlers as part of the local population.

Even if that were not possible, Mintz questioned whether "benefit" legally means considering the local population's opinion on the matter — a vast majority of Palestinians oppose the sale of land to Jews — or making a decision based on what "objectively" benefits them, "for example the economic benefit that will come with the liberalization of the land ownership laws."

However, Mintz also warned that the law change could be perceived by the international community, as "a violation of international law."

"That could lead to significant international criticism, and it would be correct for the leadership to also consider that aspect," he wrote.

Defense Ministry legal advisers Hannah Weingott and Hanan Arbel reached a similar conclusion regarding the feasibility of the move, according to the report, writing that the current legal situation "justifies a law change that would cancel the distinction between those of Arab origin and those who aren't, and enable land purchases in the region by any person." They rejected warnings of international criticism.

"The option to purchase land in the region by the way of forming a company has existed since the 1970s," they wrote. "Fixing the language of the law in a way that resolves discrimination does not renew or change the existing reality. The change will make it past international criticism."

While Mintz said land deals should continue to require the Civil Administration's approval, Weingott and Arbel reportedly argued that, that could be waived when approving "certain deals, for certain bodies and in certain areas."

"The need to receive an approval is meant to prevent land purchases by hostile entities – a justification originating to the Jordanian rule," they wrote. "That justification raises the question of the status of the entity filing a request for a permit, including an Israeli, and their perception as a hostile entity in circumstances where the Israeli military rule is the sovereign in the region."

Mandelblit, the report said, will now have to decide between the two opinions.

The occupation in numbers

A report on the eve of the 43rd anniversary of the Land Day by the Palestinian Central Bureau of Statistics (PCBS), says Israel has so far occupied more than 85% or some 27,000 square kilometers of historical territories of Palestine in an expropriation process, which continues unabated.

According to the report, Palestinians now live on and own only 15% of their ancestral land.

Since the Oslo Agreement of 1993, Israel has used the deal's land classification of A, B and C to further, tighten control, particularly in areas classified as C with an area of 3,375,000 dunams (roughly an acre).

Some 2,642,000 dunams, constituting 76.3% of the total Area C, was exploited by the Israeli occupation directly.

The proposed bill is just the latest part of a long-standing effort by Israel to annex the West Bank through creeping property purchases, the recognition of illegal settlements and control of essential resources like water.

Yet, with President Donald Trump in the White House, Israel's efforts to annex the West Bank have become emboldened due to his administrations marked as pro-Israel policies.

In the case of the West Bank, some administration insiders have hinted for some time that President Trump would be more than willing to support Israeli efforts to formally overtake Palestinian territory in the region.

The Israeli regime does not accept the international recognized consensus, which states that the West Bank is occupied territory, and ignores the agreements that they have signed acknowledging this fact.

Israel maintains that the West Bank is theirs and refers to the territory by the biblical name "Judea and Samaria," disregarding its Palestinian population and international law.