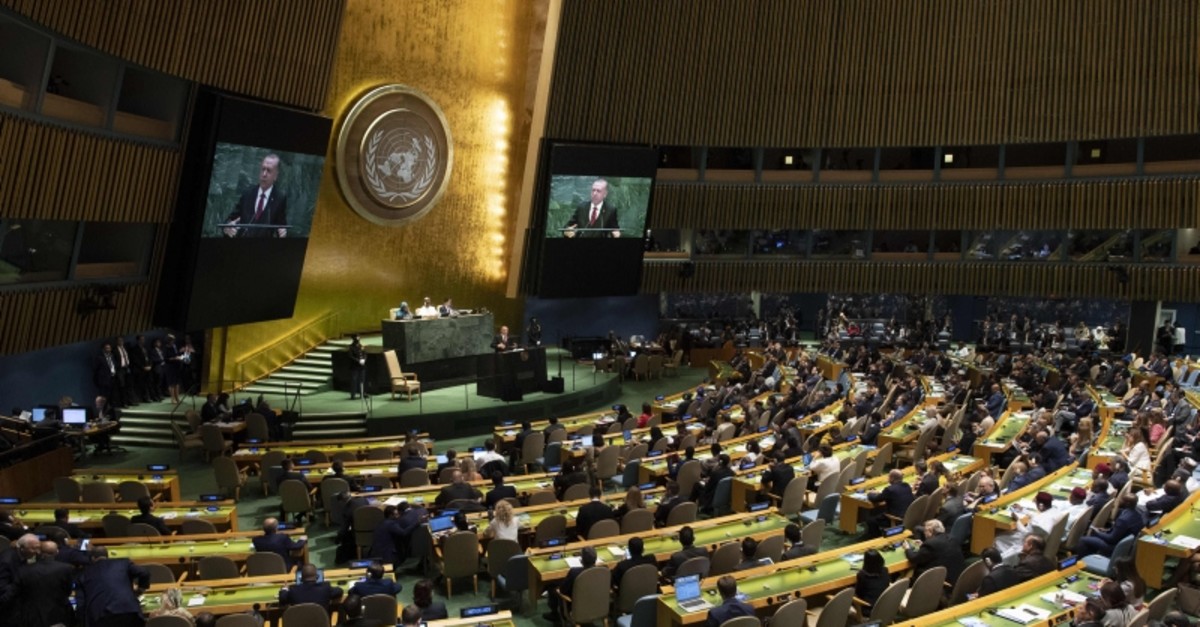 The 74th U.N. General Assembly brought together some of the most outspoken, bold and followed presidents, premiers and senior officials representing 192 out of the 193 U.N. member states.

Among them, the British liberal paper The Guardian listed four of the most outspoken leaders, including President Recep Tayyip Erdoğan. Evidently, Erdoğan is seen as one of the Muslim world's spokesmen. This assumption is mainly based on his well-founded stance on Muslims suffering in Palestine, Kashmir, Myanmar, China, Syria and beyond.

In comparison, this year Pakistani Prime Minister Imran Khan debuted his first-ever appearance in the U.N. platform. Although new to the world political arena, Khan had previously enjoyed frequent attention in Western media as a cricket star.

Identically, both Khan and Erdoğan have been noted by Western media, which all too often portray their home countries as problematic. Both leaders were given extraordinary coverage in leading Western newspapers, including The Guardian, The Independent, The New York Times, France 24, The Washington Post and Deutsche Welle. The most salient features of Erdoğan and Khan's speeches were decoded as "humanism," as both raised their concerns about the human rights of those in Syria, Palestine, Myanmar, Kashmir and beyond. In this instance, Western liberal news outlets had to embrace the humanist elements of the issues and align themselves with Erdoğan and Khan because these liberal newspapers cherish human rights as one of their fundamental values.

A voice on Syria, Erdoğan's use of images of drowned Syrian toddler Alan Kurdi and a sketch of the Israeli occupation of Palestinian land was a powerful reminder of the Syrian refugees' crisis and the human tragedy currently happening in Gaza. The icons of serious journalism, The Guardian and The New York Times, published these images. Erdoğan's proposal of stabilizing a "safe zone" for the Syrian refugees made headlines in leading Western newspapers, including The Guardian, The Irish Times and Deutsche Welle as a token of praise. Certainly, this idea once again projected him as a "spokesman for Muslims across the world." No matter, his dream has come true. Erdoğan has already won the hearts of Syrian refugees.

Erdoğan's second-most powerful reminder was about "hate speech." Without mentioning the names of any world leaders, he vigorously said "populist politicians" are fueling "hatred." This remark made headlines in The New York Times.

On this front, Erdoğan also played it smartly and without being accused of anti-Semitism when he successfully presented the case of Palestinians by holding up a map showing that Israel had been grabbing Palestinian land since 1947. He also highlighted Israeli brutalities and the suffering of several other Muslim communities living under oppression in South Asia and beyond.

It is at this point where the liberal press in Britain and America has taken both Erdoğan and Khan's arguments as valid and genuine concerns. In fact, Imran's references to Western movies and plays were useful shields against criticism. Similarly, Erdoğan's use of Western academic citations and illustration based on Western values explained the brutal actions of Israel and India in Kashmir and Palestine, two unsolved issues of British colonial past. This prevented Erdoğan from being labeled anti-Semitic. Yet, Erdoğan's other key arguments, "the world is bigger than five" and his proposal of "nuclear power should either be free for all or banned," hit headlines in major TV channels and newspapers like Reuters, Deutsche Welle and the Daily Mail. Khan's image, on the other hand, was portrayed as a "humanist" and his posture in mainstream Western media shows that his cautionary proposals must be taken seriously. Again, Khan's well-articulated arguments over increasing Islamophobia, hate speech and the controversial caricature of the Prophet Muhammad were received as valid and genuine concerns. Khan illustrated that the Holocaust is a genuine source of pain for Jews; therefore, the Western world must understand that any derogatory portrayals of Prophet Muhammad cause pain for Muslims. His soundbites such as, "It is important to understand this. Prophet Muhammad lives in our hearts, when he is ridiculed, when he's insulted, it hurts," took a prominent place in several reputed newspapers, including The New York Times. ABC News' understanding of Khan's explanation of Islamophobia is seen in the headline: "Analysis: To combat Islamophobia, Khan bridges East and West;" here, the word "bridges" is an indication of cooperation and understanding between the East and West.

Imran Khan's final words on Kashmir were taken seriously in most outlets of Western media. Several newspapers picked up phrases such as "bloodbath" and "potential nuclear war" for Kashmir as warning shots. Several media channels and newspapers in the West, including Reuters, Deutsche Welle, Al-Jazeera English, The National, The Washington Post, The Guardian and The Japan Times, all published power headlines using the phrases "bloodbath," "violence" and "potential nuclear war" in single quotes, advocating the seriousness of the issues.

The key reason for a possible genocide is the Modi administration, as Khan smartly builds up his arguments through references to the Nazi theory of a superior race that has led to tragedies in the past. Hence, it served as a fine reminder to the Western world that present-day RSS ideology in India is leading to another potential genocide because of "injustice."

Using powerful quotes effectively, these TV channels and newspapers stressed the consequences of such a war in the region that would destabilize the entire continent. Notably, The Independent went further to the extent that it suggested under the leadership of Imran Khan Pakistan has now become a world player. The message to world leaders is loud and clear: In a dramatic shift from the past, our country is no longer a pawn, a joke or a global bystander. But there's still a long way to go. In the past, we witnessed many powerful and profound speeches at the U.N., but those speeches were made in the face of conflict and became useful references in debates concerning Palestine and Kashmir. So will the developed world leaders listen to these genuine complaints and warning shots? We will just have to wait and see if there will be any lasting effects of these emotional speeches.

* British-Pakistani political analysts and human rights activist based in the U.K.

Academic, analyst and activist based in the U.K., Ph.D. holder at the University of Huddersfield
RELATED TOPICS