The fate of national identities in the Middle East: A failed imitation 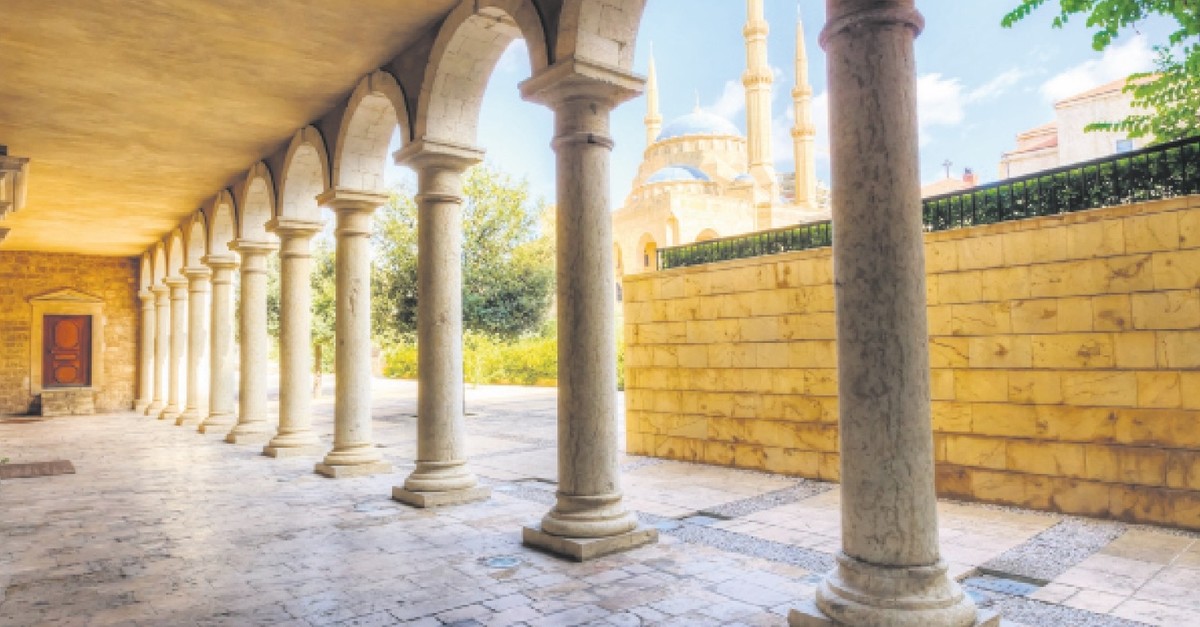 The Mohammad Al-Amin Mosque situated in downtown Beirut, Lebanon as viewed through the pillars of the Greek Orthodox church of St George.
by Mehmet Fahri Danış Oct 17, 2019 2:07 am

The prototype of the modern nation-state and the identity of "national citizen" that was born out of it began to become prevalent from the early 19th century onward as the pattern of dominant political organization. Being largely a result of Europe's peculiar political and cultural development, this structural transformation had a characteristic of "replicability," as Benedict Anderson emphasized and soon penetrated everywhere that Europe's influence was felt.

Ideas like the nation, nationalism and the nation-state entered the Middle East following Napoleon's Egyptian campaign and quickly spread among those people (mostly Christians) who had received education in Western languages. But the fundamental problem was that the practices of belonging in the Ottoman Middle East were rooted in certain grounds on the basis of religion and loyalty to a dynasty. The ideology of nationalism intended to replace these loyalties with certain specific ethnic or geographic concepts. The roots of ideas like Arab, Syrian or Lebanese identities were "rediscovered" among the 19th century Arab intellectuals so as to serve this purpose.

Questions over whether nations were "built," "existed from the beginning of history" or were "rediscovered" have long been among the most prevalent topics of debate in political science.

Unfortunately, there is no objective answer yet to these questions – as it is with many other questions in political science. The real factors that define us when interpreting the naturalness of nations are our ideological or academic perspectives. Still, it is possible to make some inferences.

Before anything else, we can observe that behind every political movement that aims to make the "nation" the dominant form of belonging lies a stage of cultural awakening, widely referred to as a renaissance.

National history, standardized language, selected narratives woven out of symbols, heroes, hallowed geographic concepts and pastoral eulogies are arranged in a certain way by the elites of a community. As a result of the efforts of "myth-making intellectuals," a prototype nation with specific borders, and hence a definable concept, gains ground in the community's "habitus," in the Weberian sense of the ideal – i.e., in need of "being realized."

In the Middle East, these movements mostly took place among Christian populations that were open to Eurocentric ideas because of their command of foreign languages. The Christian literati of Syria and Lebanon had compiled the first modern Arabic dictionary and encyclopedia along with books in literary genres like novels, as part of the cultural movement called the "Nahda" (Awakening), thus defining the boundaries of being "Arab." While the article on Syria in Boutros al-Boustani's encyclopedia emphasized Syria as the common historical fatherland of all Arabs, the Arab protagonists of Jurji Zaydan's historical novels brought the nation's epic past into view.

On the eve of the collapse of the Ottoman Empire, the Near East was interwoven with conflicting nationalism, borders and constructed identities. Talking about the economic and cultural center called Bilad al-Sham, or Greater Syria, the categories of being an Arab, Syrian and Lebanese formed the basic ground for dissidence. Usually, the boundaries of these identities had been mingled, and for example, it was not so possible to specify the difference between being an Arab and a Syrian. From the illiterate man on the street to the intellectuals, the people of the Middle East at the turn of the 20th century had a hybrid character in terms of their identities. Above all, secular nation-state identities "copied" from the West failed to win over the masses over despite all the theoretical arguments in support of them. For 500 years, the religion-based Ottoman social organization model had allowed ethnoreligious communities to live in autonomous entities of their own. The vision of a nation, on the other hand, which envisaged subsuming faith, sect, ethnicity and other identities as "sub" identities, pushed all these references aside and replaced them with national identities whose boundaries were defined later.

Of course, this was the fundamental problem underlying the Western-centered new system within the Middle East. The revolts in Palestine and Iraq in 1920, and in Syria in 1925 clearly showed that Britain and France failed to build an overarching national identity for Arab states under the mandate rule. French colonial practices in Syria came to further accentuate the existing cosmopolitan structure and turn it into political boundaries, thus creating ethnoreligious structures which were isolated from each other.

This, in turn, led to the creation of separate states for the Druze, Nusayris, Antiochians and Lebanese Christians. Eventually, as the functionality of this project was called into question, Syria came to have a more or less unitary structure with its own borders. But Lebanon was structured in a manner totally different from Syria and the rest of the Arab world, in such a way as to ensure its Christians an active role in government.

As a result of the efforts of European Orientalists from the late 18th century onward, already there was a concept of Lebanon based on alleged ties to ancient Phoenicia. The activities of the Maronite intelligentsia and especially of scholars in Jesuit colleges in Beirut during the 1920s reinforced this idea of Lebanon. The issue of a "pro or anti-Syria" stance, which would form the principal axis of Lebanese politics for the rest of the 20th century (and even today, to some extent) emerged at that time, and various nationalist ideologies with different visions of identity have become increasingly popular among people.

The following words by Ameen ar-Rihani, one of the greatest masters of the Arabic language in the late 19th century, can be read as the "credo" of a man who was trying to lay the foundations of his own identity under the shadow of conflicting and intermingled identities: "I'm a Syrian first, and then a Lebanese, and finally a Maronite. I'm a Syrian who defends the geographical and political integrity of Syria. I'm a Syrian, Lebanon is my birthplace, I respect Arabs, and, as prescribed by my religion, I believe only in Allah."

As an intellectual who spent most of his life in the United States, Rihani's "romantic" views on his own identity can be understood from a certain perspective. But one wouldn't find many people with such views in the Middle East during the interwar period, between two world wars, at a time when nationalism peaked.

The main problem stemmed from a conflict among three groups: pan-Syrians who wanted to transform Syria into a secular "Greater Syria" comprising Lebanon, Iraq and even some parts of Turkey; pan-Arabs who envisaged all Arabs living together under a federal structure with Syria at the center; and Lebanese nationalists who argued that Lebanon had a Western national identity independent from all these structures.

All three ideologies had their roots in the same source and their followers spoke the same language and came from almost the same ethnic background. They were accepted by the members of the same local circle and their shared cultural memory encompassed common memories and "forgotten elements." But what distinguished a Syrian person from a Lebanese person, or what prevented both a Syrian and a Lebanese from being Arab, despite all these shared characteristics?

The answer lay in the historical background of the concept of "nation," one of the early magical words of modernity. First of all, political and administrative mechanisms throughout Europe were shaped anew during the 19th century, along national lines.

Bohemians and Hungarians being ruled by Germans, the Irish ruled by the British, or Greeks and other Balkan "peoples" being ruled by the Ottomans were no longer compatible with the prevailing norms, or the "doxa." Over time, European-style national awakenings were localized by "criollos" (or creoles, often serving as colonial functionaries) and intellectuals of the new world, in line with their local patterns.

For the Ottoman Middle East, the same process began with the standardization and institutionalization of the Arabic language and Arab history. The mandate rule established in the region in the wake of the World War I helped realize this ideal, and most parts of the Near East were restructured in such a way as to create a series of Western-style territorial nation-states.

This "copyable model" failed to get a foothold due to the above mentioned fundamental problems, and was demonized with the discourse of "Sykes-Picot borders," which is still popular among politicians in the Middle East. While the nation-state model is the source of structural problems in the Middle East, religion-based loyalties penetrating deep into society and creating problems when copying the secular character of the nation have played an indisputable role.

Furthermore, that discourse is also compatible with the Orientalist perspective that has entered academic literature with lightning speed from the 1970s on. But this approach has an essential drawback; every cultural resistance to Western hegemony, every "Oriental" discourse questioning its basis, risks falling into the trap of superficiality by enshrining this argument. This is also a corollary of the defects of Edward Said's theory of Orientalism.

Putting the whole blame on the colonialist past (and this colonialist past encompasses not only the mandate period but also the Ottoman past, in the official discourses of Arab states) instead of looking for the roots of the problem in their own actions drags intellectual life within the Arab world into a severe crisis. And this provides a very convenient "shadowy" superficiality for the pragmatic policies of authoritarian Arab leaders.

The solution to this problem, which has been recently addressed by intellectuals like Aziz al-Azmeh, requires the East to discover its own political and cultural wisdom and its own civilizational grammar. Nationality, globalism and other such modern concepts may be failed forms that were injected via Westerners into the Near East. But the duty to replace such identities with Eastern-origin identities that derive from their own historical backgrounds, or at least contemplate, them should fall on Easterners again.