Decoding Russia's difficult relationship with the US 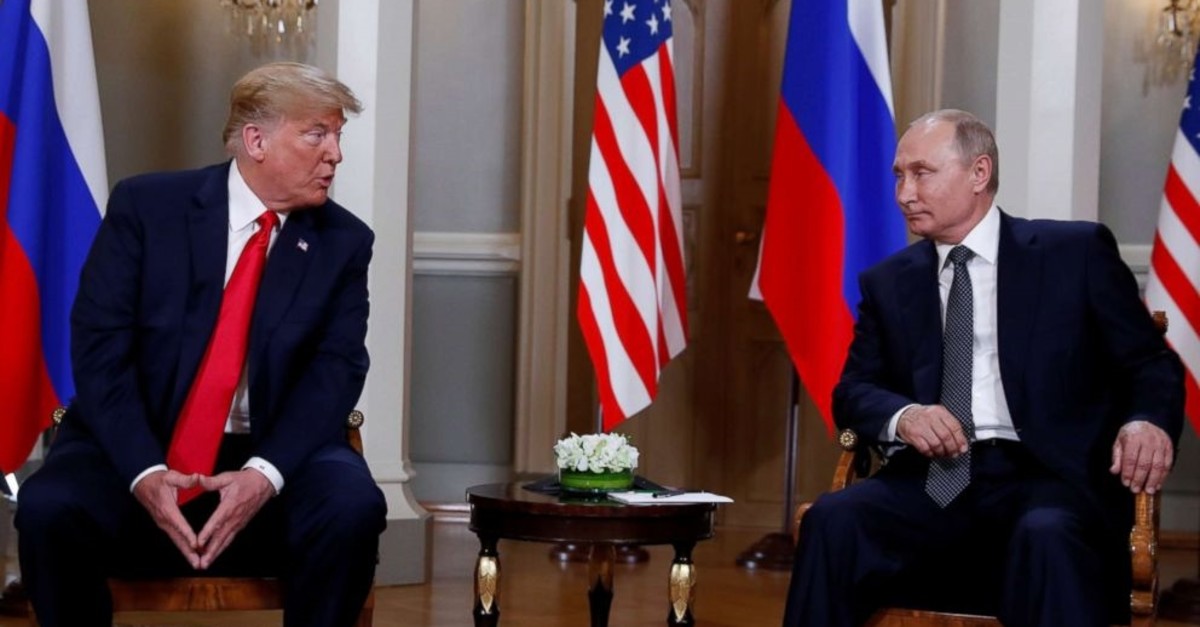 Only a pragmatic and functional mode of engagement could offer a solution for the U.S. and Russia to keep their relations on track

Once the Cold War ended with the fall of the Berlin Wall in 1989, the unification of the two German republics in 1990 and the dissolution of the Soviet Union in 1991, a new geopolitical environment evolved in which the triumphant Western powers found it difficult to accept the Russian Federation, the successor of the Soviet Union, as a great power. Common to all successive American administrations since the early 1990s is the perception that Russia could best be described as a regional power that does not have the power capacity to be deemed a great power on par with the United States.

Even though Russia itself pursued a pro-Western orientation during the 1990s, Western powers did not accord Russia a great power status or a legitimate place in the existing liberal international order. This is the opposite of how Western powers treated the former communist countries in Central and Eastern Europe.

At the risk of antagonizing Russia, Western powers admitted many Central and Eastern European countries to the EU and NATO. Due to Russia's decaying power capacity, Western powers, led by the United States, simply expected Russia to accept the Western understanding of European and the global security order. However, Russia vociferously opposed the U.S.-led NATO operations in territories of the former Yugoslavia. When NATO undertook military attacks against Serbia in 1999 to coerce the Serbian leadership to withdraw its troops from Kosovo, Russia reacted strongly. From the Russian perspective, any NATO-led involvement in the internal affairs of other countries without the approval of the United Nations Security Council appeared illegitimate and illegal.

Even though Russia had to grudgingly swallow Western penetration into the post-Soviet geography during the 1990s, Russian opposition to Western primacy in its former territories saw a radical increase following the coming to power of President Vladimir Putin in early 2000. Since then, tensions in Russia's relations with Western powers have increased spectacularly.

Russian discomfort with American policies increased tremendously during the presidency of George W. Bush between 2000 and 2008. During this period the so-called neoconservative school of thought shaped American foreign policy thinking decisively, whereby the United States adopted a global primacy strategy and promotion of American values across the globe through unilateral instruments.

No longer believing in the legitimacy of multilateral platforms, the George W. Bush administration forced its allies to toe its line as well as putting maximum pressure on potential rivals to digest American faits accomplis. In such a way to demonstrate its discomfort with American foreign policies, Russia strongly opposed the U.S.-led war in Iraq in 2003. Together with France, Germany and China within the U.N. Security council, Russia voted against any U.S.-led multilateral military operation in Iraq.

The Bush administration supported the so-called "color revolutions" across the post-Soviet region, first in Georgia, then in Kyrgyzstan and then in Ukraine, hoping that successful implementation of liberal democratic practices in those countries would bring to power pro-American regimes. Notable in this context is the American support to the NATO membership of Georgia and Ukraine. The NATO summit held in Bucharest in 2008 decided that Georgia would join NATO sometime in the future pending its transformation into a democratic and capitalist state.

From the Russian perspective, such Western policies aimed at nothing but containing Russia's growing influence. To Russian elites, all great powers are entitled to have their own sphere of influence, and Ukraine and Georgia do definitely lie in the Russian sphere of influence. Russia conducted a limited military operation against Georgia in the summer of 2008. Similarly, Russia annexed Crimea into its territories after the pro-Russian regime in Ukraine was ousted by the power of demonstrations in early 2014.

The prospects of Ukraine and Georgia joining the EU and NATO before Russia developed a cooperative relationship with Western powers would not be acceptable to Russian decision-makers.

In the Munich Security Conference in 2007, Russian President Vladimir Putin delivered a historic speech in which he harshly criticized American efforts to promote American values across the globe and strengthen its primacy through the adoption of unilateral policies. Putin made it clear that the dissolution of the Soviet Union was a historic mistake, and his mission would be the rejuvenation of Russia as a formidable great power. Russian leaders mistakenly assumed that following the end of the Cold War there would be no need for NATO to exist as a collective defense alliance. Russian leaders argued in favor of the formation of a pan-European security organization that would replace NATO as the prime venue to discuss European security. One particular Russian priority was that Western powers recognize Russia as a great power and redefine the security structure in Europe in close cooperation with Russia. Russian decision-makers believe that Western powers promised Russia not to enlarge NATO toward Russian territories in return for Russian acquiescence to German unification and united Germany's ascension to NATO. Despite such Russian expectations, NATO has continued to enlarge closer to the Russian border.

In 1997, the NATO-Russia Founding Act was signed whereby Russia would be able to join NATO meetings in Brussels without having the right to vote on final decisions. However, after the Kosovo crisis in 1999, relations between Russia and NATO dropped. Relations began taking on a new momentum with the formation of the NATO-Russia Council in 2002. Besides, Russia was admitted to the G7 group in 1998 as a consolation prize for NATO's decision to admit Hungary, Poland and the Czech Republic as members in 1999.

Russia was removed from the G8 in 2014 following its annexation of Crimea. The Russian use of force against the sovereign states of Georgia and Ukraine clearly demonstrated that Russian leaders accord a primary value to military power in foreign policy. The recognition of South Ossetia and Abkhazia as sovereign states and the annexation of Crimea into Russian territories were in clear violation of the founding principles of the Westphalian international order. Even the then-American Secretary of State John Kerry accused Russia of employing the tools of 19th geopolitics in the emerging 21st century

Once Barack Obama replaced Bush as president in early 2009, the new American administration decided to set in motion a reset in its relations with Russia. The driving logic behind the reset initiative was that despite all kind of the disagreements between the two, the United States and Russia also shared common strategic interests, such as preventing the proliferation of weapons of mass destruction, defeating al-Qaida and its affiliates across the globe, bringing stability to Afghanistan and Iraq, dealing with transnational terrorism and organized crime and finding a lasting solution to the attempts of North Korea and Iran at acquiring nuclear weapons. For about four years, the reset initiative appears to have eased the tension in bilateral relations. The period between 2008 and 2012 coincides with Dmitry Medvedev's presidency in Moscow. Yet, relations have once again taken a negative turn after Putin returned to the presidency in 2012. The strong people protests in Russia in 2011 seem to have instilled a growing degree of skepticism in Putin's administration with respect to the intentions of American governments vis-à-vis Russia. From Putin's perspective, the American support to anti-Putin street demonstrations revealed nothing but American intentions to get involved in Russian domestic politics through nonstate actors. The illiberal authoritarian turn in Russian domestic politics following the reinstitution of Putin's presidency has also demonstrated that the widening value gap between the United States and Russia would likely become a thorn in bilateral relations.

After the Crimean crisis

Russia's relations with the United States deteriorated dramatically following the Crimean crisis. In cooperation with European allies, the United States orchestrated an economic and political embargo against Russia. Relations have gotten worse following Russia's military involvement in the Syrian civil war on behalf of the incumbent Bashar Assad regime in late 2015.

In such a way to help lessen its international isolation and take its revenge on Western powers, Putin seems to have decided to prop up the Assad regime through the employment of all policy instruments at its disposal. Sending military troops to Syria was complemented by diplomatic efforts within the United Nations to help block any multilateral or U.S.-led military operations against Assad. It is worth noting that China sided with Russia within the United Nations Security Council. Russia also helped organize alternative diplomatic platforms to explore the possibility of finding diplomatic solutions to the Syrian civil war. It is within this context that Russia, Turkey and Iran have met numerous times to find compromise solutions to the Syrian civil war. Hence the Astana and Sochi processes.

With Donald Trump winning the presidential elections in late 2016, bilateral relations have turned extremely negative. Despite Trump's intentions to improve relations with Russia with transactional and pragmatic logic as well as his sympathy with Putin's style of strongman rule in Russia, there is now a bipartisan consensus in U.S. Congress that Russia deserves to be punished for its illiberal authoritarian turn and overt political interference with the American presidential elections in 2016.

It is worth noting that the National Security Strategy and National Defense Strategy documents that the Trump administration announced in late 2017 and early 2018 respectively categorize Russia and China as the most important global rivals to be reckoned with.

On the other hand, despite Trump's extremely critical stance on NATO and European allies, American contribution to NATO's deterrence and reassurance capabilities have meaningfully increased over the last years. A sizable number of American troops have now been deployed to Poland and American efforts to fortify NATO's military presence in Central and Eastern Europe have tremendously geared up.

Unless cool heads in the U.S. can advocate for pragmatic and functional engagement with Russia on realistic terms, meaning taking Russia as it is, the future is unlikely to bode well for Russian-American relations.