Algerian 'Hirak' is neither a revolution nor a social movement 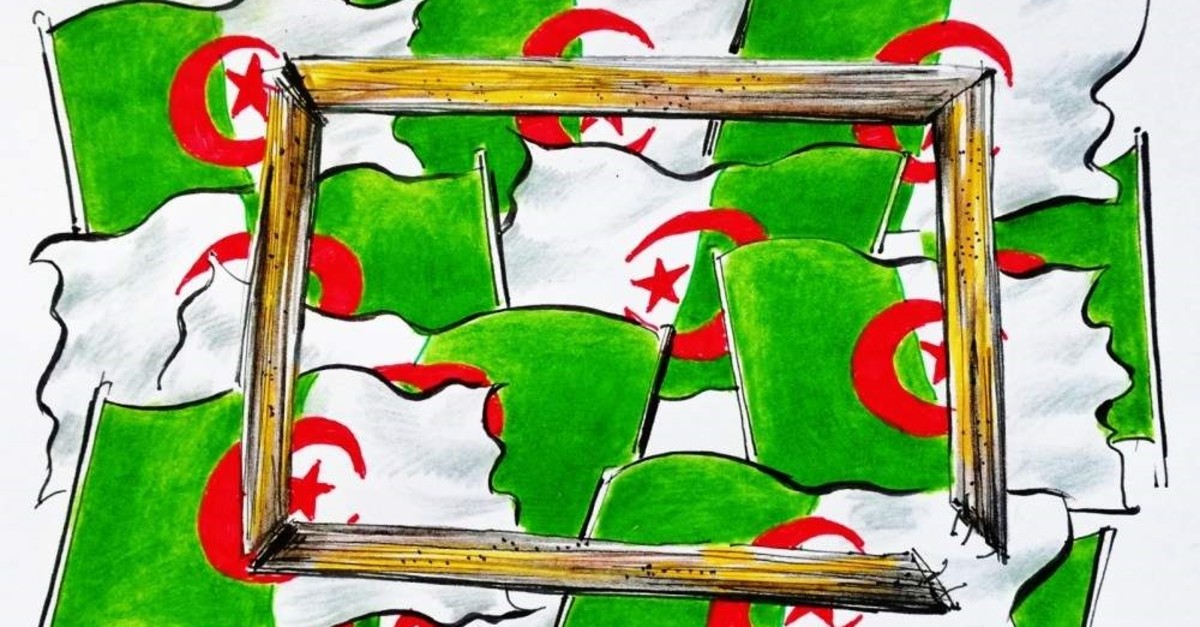 Incorrectly compared with the events of the Arab Spring, the ongoing eight-month movement in Algeria seeks radical change - but by peaceful means

Debates about the ongoing Algerian movement called "Hirak" are still highly contested and unclear among political commentators. Political scientists find it difficult to identify, with clearly defined borders, the differences between social movements and revolution.

Therefore, the aims and consequences have been the main indicators emphasizing the differences between the two concepts. About a decade ago, Arab Spring was categorized as either a revolutionary movement or, more narrowly, as different social movements.

By "revolution," scholars meant an unorganized movement aiming for dramatic social and political change with the possibility of violence. The term "social movement," on the other hand, implied reforms that would push governments to hand back previously denied rights through organized demonstrations with little risk of violence between those demanding rights and those denying rights.

The way of protests

Unfortunately, none of these movements – except Kuwait and Tunisia, after 300 people were killed – coalesced into democratic regimes. NATO with its military intervention paved the way for Libyan rebellions to dislodge the Qaddafi regime.

Syria dodged international powers' attempts and ended up with 6.5 million people internally displaced, as more than 3.5 million refugees fled the country. Yemen still suffers from both humanitarian and military crises, while Egypt fell into ruin under a military regime.

In Saudi Arabia, some Saudis took to the streets calling for reforms. Shia protesters and some women's rights activists in both Riyadh and in eastern provinces complained of political and social discrimination.

Likewise, in Bahrain, protesters of the Shia majority took to the streets demanding more democracy and an end to discrimination. All of these movements produced mixed results ranging from small scale accommodation of protesters' demands to outright rejection. Saudi Arabia and Bahrain have suppressed protests with strong state security measures.

The main theme of this piece is not to qualify the Algerian case as a successful model, but rather, to contextualize why the Algerian Hirak movement does not fit either of the aforementioned categories – revolution or social movement.

The beginning of Algerian protests last February, which continue until now, are paradoxical in that the Algerian movement does not stick precisely to one of the two Arab Spring categories. Algerian Hirak is a movement that brought together and merged two antithetical components of both revolutions and social movements. It is, therefore, an unorganized movement seeking radical and dramatic change, not just social and political reforms. However, unlike revolutionary movements of the Arab Spring, it has totally rejected violence.

Algerian protesters, who have taken to streets with their radical demands, have maintained a peaceful relationship with authorities. Despite a series of various provocations from the security apparatus to disperse protesters, the protesters’ lack of response could extend the lifespan of the Hirak.

Instead of escalating to a military conflict between both sides, which happened in the black decade, the back and forth contention is taking place on the streets without injuries or deaths. Every Thursday and Friday, and recently, other days as well, the Algerian movement still persists with the same dramatic demands.

The recent "arrest-all" campaign that seeks to provoke protesters who gather every Friday has been answered with smiles and peaceful tactics, responding quite effectively to those who represent the authorities.

If this is so, then what about the recent protests in Lebanon? Lebanon's movement also evades the aforementioned categories. Despite sharing the revolutionary and unorganized characteristics seen in the Arab Spring – in Tunisia, Egypt, Libya, Yemen, Kuwait and Syria, and recently in Algeria – the extent to which the Lebanese movement will become revolution is a matter of the consequences from the interaction between the movement "inputs" and the responses of the system "outputs."

In the case of Lebanon, the different type of interaction could be seen in the fragmented ideological fabric that, in parallel, correlates the system to the movement. While the very mechanism of the revolutionary movement is to assert the persistence of its dramatic demands, the interaction between the political forces in the system and social forces on the ground would possibly lead to another category or reduce the revolution to a social movement.

The Lebanese political system is a sectarian parliamentary system, where the government authorities are divided among three large religious sects, each of which holds certain powers, and each sect has an equal voice in politics.

If one or two of the social groups is backed by a strong political power, they then have easy access to the public goods in comparison to other social groups. So, in Lebanon, the demands concern the population that is less advantaged. In this case, the movement could be reduced to a social movement with the weaker group.

If all actors have equal powers in political and social spheres, then the interactions would have different variations depending on the horizontal relation between internal actors in the system and in the public sphere, as well as the vertical relation between each political power and its public base. The political system may also respond to the demands, such as in the case of the resignation of Prime Minister Saad Hariri. The same resignation could be read as a political tactic used to contain the protesters anger. While it is a victory to see Hariri resign, how could different ideological forces coexist in the future?

As for Algeria, the interaction between the holders of political power and the protesters is still peaceful. Despite still maintaining the same demands and slogans, what makes Algeria's Hirak different compared to the previous cases was the appropriate time on both internal, regional and international scales.

The breakup of governing elite at the internal level together with a favorable external environment have put the government in a critical situation. Neither regional powers nor international ones wanted to push Algeria to a Libyan or Syrian scenario. After the consequences of the NATO intervention, the security dilemma in Libya between internal forces – with waves of illegal immigration toward southern Europe and escalating criminal organizations and terrorist groups from the Sahel region – made these powers revise their decisions.

Despite the service that the Algerian regime offers to Western powers, Europe estimates more than 5 million Algerians would move to Europe if any military conflict takes place in the country.

The agenda is to keep the current status quo which ensures that Algeria continues to serve western geopolitical interests at least until the elections scheduled for next December. Algeria serves as a good partner for the U.S. "War on Terror." Algeria is also one of main buyers of Russian weapons, and France's oil company is privileged in extracting Algerian oil.

Besides for internal and external factors, the tactics of the Algerian protesters could, to some extent, maintain the peaceful interaction. The pre-existing experience that Algerians gained from both the Algerian Black Decade and Arab Spring led them to conclude that, in most cases, military confrontation allows for further suppression.

Now passing the eight-month mark, the movement is spreading. Every Friday in Algiers, protestors consistently adapt themselves to the expected “outputs” from the political block. The regime has attempted to engage protesters in its game using different tactics on many occasions.

For instance, the regime attempted to persuade protestors by using historical sacred slogans, such as being Novemberists – referring to Mujahidin in the Algerian war against France – or being Badisists – referring to Ibn Badis, who played a role in religious reforms during the colonized Algerian era. In all cases, protestors did not swallow the bait.

One of the reasons that the Algerian Hirak still persists in its peaceful interaction with the political block is the fact that Hirak protestors did not positively respond to the state provocations, even to suppression from police, and also, the movement does not have representatives. This means that every individual is included and the demands are sharply identified, with no negotiations with the regime unless it accepts the demands. In short, no negotiations unless the protestors get the power.

Although Algeria can be understood in a number of different ways, it differs from being a social movement or revolution. That does not mean the movement could not escalate or deescalate into a more traditional category, such as a riot or insurgency, for example. It is, for the time being, a Hirak that combines dramatic demands – Trouhou Gââ – with a longstanding peaceful method of protests.