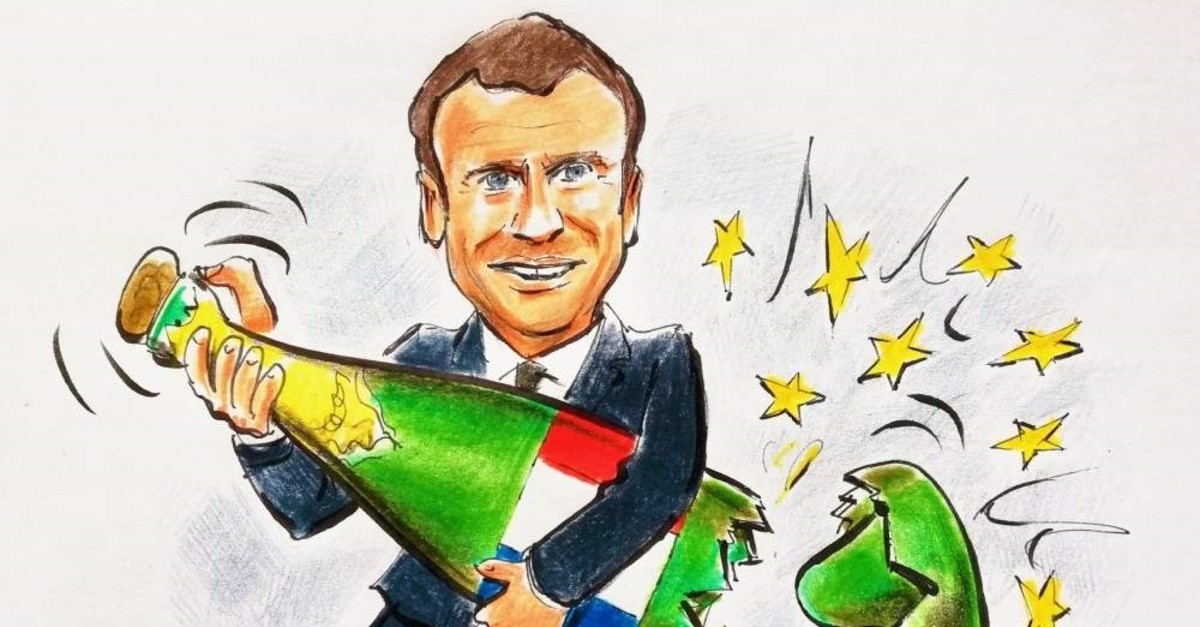 Europe nowadays needs wise leaders more than ever, who constructively and competently promote dialogue and cooperation

As different parts of the world, including Europe, face some deep-rooted and complicated issues, there is an urgent need for a nuanced, constructive and cooperative approach in order to solve these problems. French President Emmanuel Macron has presented himself as a champion of the spirit of solidarity and cooperation in Europe. He often expresses his views on European affairs in a manner that signifies that he fancies himself as the headteacher of Europe.

However, he has also made provocative and hyperbolic statements opposing EU enlargement in the Balkans and against certain EU member and partner states. This approach, rather than creating a spirit of solidarity and cooperation, has created regional confusion and instability. The latest example was Macron's metaphor about NATO.
Suffering from 'brain death?'

According to The Economist, “in a blunt interview, the French president laid out his thoughts on NATO, America and the future of the EU” and said Europe is “on the edge of a precipice.” Most interestingly, Emmanuel Macron claims that NATO, the transatlantic alliance, is suffering from “brain death." He also mentions his longtime dream of developing a European military force.

This European military force is, in fact, the joint Franco-German European army that France and Germany announced during the signing of a new “Treaty on Franco-German Cooperation and Integration” in Aachen on Jan. 22, 2019. It should be noted that this new treaty was signed 56 years after Chancellor Konrad Adenauer of Germany and President Charles de Gaulle of France signed the Elysee Treaty in 1963 in the same city.

The Economist describes Macron’s views on the future of Europe as “apocalyptic” and states that what Macron is drawing “an astonishingly bleak picture for a centrist European politician and an avowed internationalist.” In fact, Macron’s remarks fit his exaggerated style of speech.

It is striking that immediately after claims by the French president that NATO is suffering from "brain death," according to German state-owned public broadcaster Deutsche Welle (DW), German Chancellor Angele Merkel said NATO is far from needing life support and called the military alliance as the cornerstone of German security. DW English reflected this news item with the title “Angela Merkel condemns Macron's 'drastic words' on NATO.” She also stressed that "such a sweeping attack is not necessary."

It is possible to say that Angele Merkel's words reflect a deep contrast between a wise, accomplished stateswoman about to retire and an ambitious young politician, who prefers theatrical performances to statesman-like behavior.
Why remain in NATO?

It is also worth considering Emmanuel Macron's improper analogy in the context of France's historical on-and-off relationship with NATO. France pulled out of NATO’s integrated military structure in March 1966 in protest of U.S. domination of security issues. A credible NATO source claims that “French disenchantment with the U.S. began in October 1956, after the Suez debacle when the British and the French invaded Egypt, who captured the Suez Canal back from Nasser as part of a secret agreement with the Israelis, and the U.S. rather than support them, pulled the plug.”

It is also additionally claimed that France was also “dissatisfied with the lack of American support when they had been trying to hang on to French Indochina in 1954 during the defeat of the French at Dien Bien Phu, in what today would be north Vietnam, with what they considered to be inadequate American support for their attempts to hang on to Algeria,” said Jamie Shea, deputy assistant Secretary-General of NATO for Emerging Security Challenges in a video lecture back in March 2009.

As it could be understood from these claims, France’s dissatisfaction with the U.S. mainly stems from its colonialist activities and ambitions that were stymied by U.S. opposition. The French withdrawal forced NATO to move its headquarters from Paris to Brussels in 1967. After its partial withdrawal from NATO, France championed the idea of more independent European defense which particularly brought to the fore the idea that the then 12-nation European Community should take on this role while developing a common foreign and security policy. By 1993, France had changed its position and began to take part in NATO operations.

After so many years, in the first quarter of the 21st century, we witness the resurgence of French hostility against NATO. The president of France is openly declaring the “brain-death” of NATO. After such a declaration, if there had been a provision in NATO that would allow the expulsion of member states from the alliance, France would have to be immediately expelled from NATO. However, there is no provision in the NATO treaty that stipulates either the suspension of a state’s membership or its removal from the alliance.

Consultations take place until a decision that is acceptable to all is reached. Thanks to this democratic and egalitarian decision-making process, once a country has joined NATO, it is given a lifetime membership. The only way a member can leave NATO is if that member decides it is in their best interest to leave.

In view of this democratic character of NATO, there is no possibility to expel France from NATO. In the circumstances, France should not waste its valuable time in an organization said to have suffered “brain death” and should leave the alliance immediately. This will be beneficial for both France and NATO.
EU veto in Balkan region

As it can be remembered, the EU Commission, after years of distraction, adopted in February 2018 a strategy under the title of “A credible enlargement perspective for an enhanced EU engagement with the Western Balkans.” The strategy considers the enlargement policy as “part and parcel” of the larger strategy to strengthen the EU by 2025.

After this encouraging EU Commission strategy, Macron immediately refused EU enlargement in the Balkan region until the EU is reformed. He put forth this refusal during his speech to the EU Parliament on April 17, 2018. Interestingly, during the same speech, Macron stated, “I don’t want a Balkans that turns toward Turkey or Russia,” as if Turkey is an outsider to the Balkans and Europe.

Macron, in line with his intransigent attitude, recently blocked membership talks for North Macedonia and Albania. The media reported that most of the EU leaders expressed frustration over this outcome and that EU President Donald Tusk said he was "really ashamed" of the situation. In line with this, an editorial published in an influential European media outlet, namely The Financial Times, stated the following:

“Emmanuel Macron’s veto against the opening of EU accession negotiations with Albania and North Macedonia last week may be remembered as a historic mistake that weakens Europe and undermines its aspirations to become a geopolitical power. In an act of neo-Gaullist intransigence, the French president torpedoed EU enlargement policy, deprived the bloc of one of its fundamental foreign policy instruments, undermined trust in its promises and destabilized its Balkan backyard. Not bad for a night’s work. And all this from a leader who claims to exemplify the European spirit of solidarity and cooperation.”
Disparaging comments on EU partners

In a recent interview in the French conservative weekly, Valeurs Actuelles, Macron said, "I would rather have people who come from Guinea or Cote d'Ivoire legally, who are there and who do this work, than Bulgarian or Ukrainian clandestine networks." He also criticized the EU's posted workers scheme, under which employers send temporary workers to other member countries, and said that "I prefer to have legal migration, registered, under a quota, for X years, rather than hidden posted work.” It was reported in that regard that both Bulgaria and Ukraine filed diplomatic protests with France after the comments.

It should be noted that there is a claim in certain online media sources which points to a different translation of Macron's comment in Bulgarian and Ukrainian media. The possibility that Macron's controversial remarks are misunderstood in Bulgaria and in Ukraine because of a deliberate or unintentional mistranslation cannot be ruled out.

However, given the main features of the subject, the mistranslation does not alter the basic understanding of Macron's way of thinking. With the controversial remarks mentioned above, Macron has made it clear that he prefers workers from former colonies of France to the workers from an EU member state and from a Black Sea coastal country that has close ties with the EU. This comment is prone to be interpreted as implicitly pointing some longing in Macron's inner world for France’s colonial period.

Adding insult to injury, Macron recently labeled Bosnia-Herzegovina as a "ticking time-bomb" and claimed that the country is a source of concern for Europe in the Balkans due to the "problem of returning jihadists." In reply to insulting remarks, the Croat member of Bosnia's presidency, Zeljko Komisic, said he would summon France's ambassador to Sarajevo for an explanation.

All these developments tell us that those who arrogantly give advice to others must first give account for their own mistakes. Emmanuel Macron comes to the top of the list of those who should give an account in this respect. He frequently agitates and destabilizes Europe with his statements. With these statements, instead of encouraging Europe for a better future and giving hope to the people of Europe, he drives the continent into fear and hopelessness.

It is not possible to create a spirit of solidarity and cooperation in Europe by pronouncing hypothetical catastrophic future developments. If Europe is really “on the edge of a precipice” as Macron has exaggeratedly suggested, it has arrived at this point with incompetent politicians and faulty policies. Europe nowadays needs more than ever wise statesmen and stateswomen who constructively and competently promote dialogue and cooperation.