Remembering Joseph von Hammer in the age of alienation 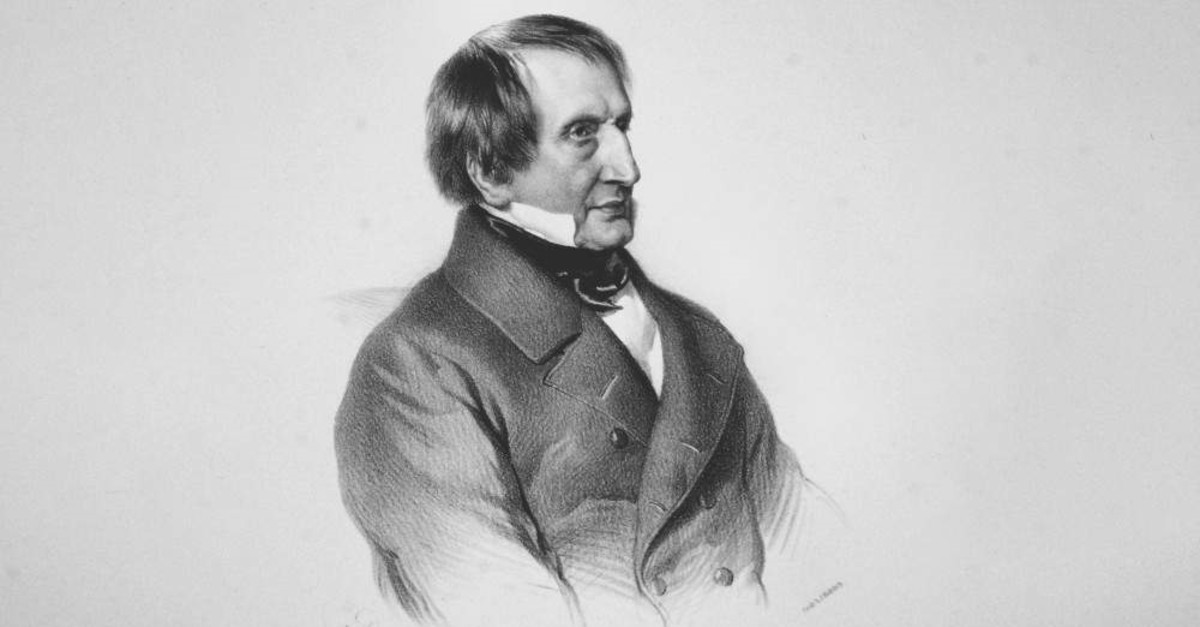 A lithograph by Austrian painter Adolf Dauthage depicts Joseph von Hammer-Purgstall, 1852.
by Batuhan Takış Nov 22, 2019 12:15 am
In his renowned masterpiece “Orientalism,” Edward W. Said once said: “From the beginning of Western speculation about the Orient, the one thing the Orient could not do was to represent itself. Evidence of the Orient was credible only after it had passed through and been reformed by the refining fire of orientalists' work.”
This very epigraph by Said came to mind when I decided to pen this memoriam for the anniversary of the passing of Joseph von Hammer-Purgstall, the great orientalist of the German-speaking world in the 18th and 19th centuries, “who deserves to be honored as a pioneer of modern Orientalism and Turcology in the West,” as history professor İlber Ortaylı put it, and who “refined” the Orient and built a still-enduring bridge between the Western and Eastern academic worlds.
That bridge, however, has now almost collapsed. Western and Eastern intellectuals have today found themselves in a common challenge to overcome, as both struggle to generate fact-based and nonbiased narratives in their academic circles – contrary to what Hammer and others of his time did once. Bad translations, propagandist copyrighted works and evasive theses are swiftly circulated in the academic world, while new media tools, naturally Twitter in particular, have transformed the traditional intellectuals’ means of expression in an unethical and speculative way.
It is sad but true to say that the world is now trapped in a dramatic age, where alienation has peaked, individualism enjoys more popularity than ever and xenophobia finds more space in societies. In other words, it is harder than ever to meet, know and confront one another, although we can now pretend to do this easily.
At such an alarming time, when “the other” becomes even more “the other,” remembering Joseph von Hammer, who proved it is not impossible to explore the other or even embrace it, is really worth doing.
Born in the town of Graz in Austria in 1774, Hammer’s most distinguishing feature compared to his contemporaries was his multilingual approach, as he could professionally read, speak and write in the three dominant languages of the Eastern world, namely Turkish, Arabic and Persian.
His numerous translations of prominent works of Eastern literature were key to introducing Eastern and Islamic culture to the Western world; in particular, the entire interpretation of Divan poetry – a corpus of about 900 poems by the 14th century Persian poet Hafez, who still plays a fundamental role in Iran's cultural understanding – brought the Persian culture to the West.
Professor Ortaylı further explains that a wide range of German intellectuals, including philosopher Georg Wilhelm Friedrich Hegel and Johann Wolfgang von Goethe, benefited from Hammer’s works and adds that even Friedrich Engels, the closest collaborator of Karl Marx in the foundation of modern socialism, admired him for his remarkable conclusions and analyses on the East and West.
Most Turkish scholars and intellectuals, however, were introduced to Hammer after his masterpiece "Geschichte des Osmanischen Reiches" ("The History of Ottoman Empire"), a 10-volume series covering the history of the Ottoman state from its establishment to the Treaty of Küçük Kaynarca in 1774, was interpreted as “Devlet-i Osmâniyye Târihi” by Mehmed Ata Bey, an Ottoman finance officer and prominent intellectual. The Austrian Orientalist’s book has been constantly quoted in every Ottoman history course in Turkish universities since then.
Hammer’s other contribution to introducing Ottoman heritage, or call it Eastern heritage, to Western intellectuals was when he became the first to translate "Seyahatname" ("The Book of Travels") of Evliya Çelebi, one of the most celebrated Ottoman travelers, into English. He interpreted the first volume of "The History of the Ottoman Empire," translating one of the most significant written sources about Constantinople (Istanbul), and part of the second volume as “Narrative of Travels in Europe, Asia and Africa in the 17th Century by Evliya Efendi.” Western Orientalists have then cumulatively worked on Çelebi’s journeys to acquire knowledge on social issues, cultural traditions, and the architecture and lifestyles of the Ottomans, or the “Easterners” as a whole.
Hammer’s Ottoman history is based on a comprehensive archive-based bibliography, consisting of both Turkish and European scripts in original languages. Although his book is accepted as the first large synthesis based on both Western and Eastern sources, the number of Western archives he used for the book was less than Eastern sources. In this context, it needs to be highlighted that Johann Wilhelm Zinkeisen, another prominent historian of the Orient, was the master of Ottoman archives in Western libraries, or the Geschichte des osmanischen Reiches, in Europe.
Taking into consideration how Hammer and similar scholars contributed to building a bridge between the two civilizations, commemorating Joseph von Hammer's works written 163 years ago demonstrates for today’s intellectuals an exemplary case of how to overcome prejudices and reintroduce ourselves to each other to launch mutual endeavors. If differences cannot be overcome, mankind’s journey for knowledge is doomed to reside in a limited space and working with the “other” will become much harder to sustain.
Let us honor Hammer’s soul with the Arabic epitaph on his gravestone in the Weidling graveyard in Germany’s Neuburg, which upon his order was designed to resemble and emulate Ottoman scholars' graves in Istanbul: “Hüve’l-bâkī, rahmân olan Allah’ın merhametine sığınan üç dilin mütercimi Yûsuf Hammer,” meaning in English: "God alone is eternal, the trilingual translator Yusuf Hammer, who seeks refuge from Allah, most gracious."