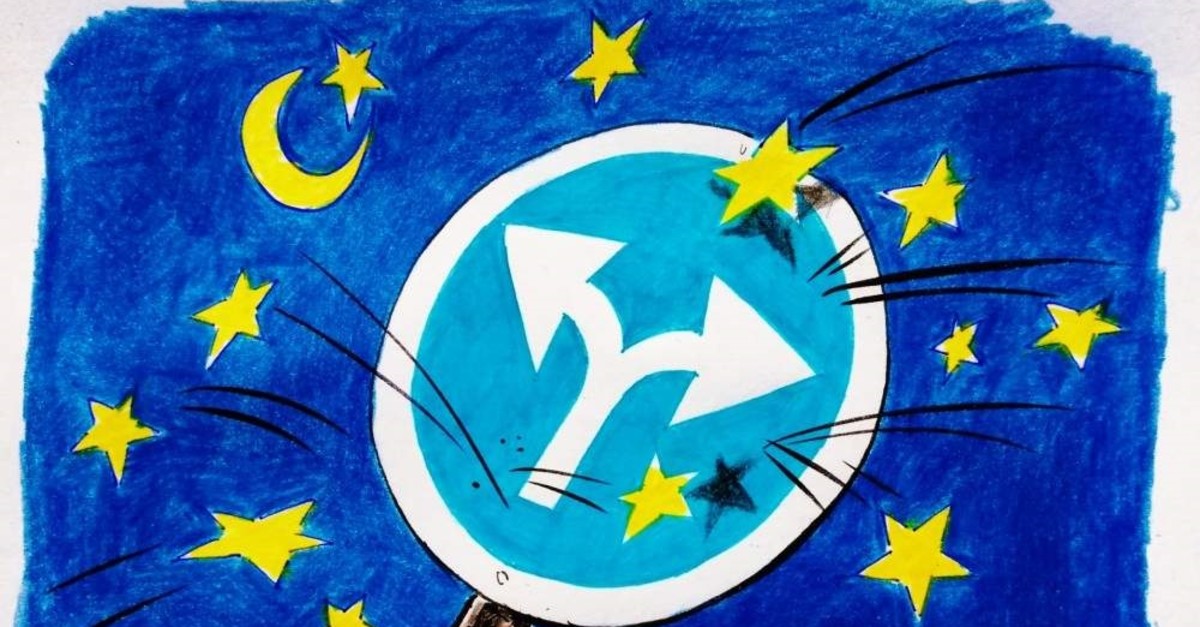 Whether skeptical or not, EU representatives have no other choice but to rethink membership negotiations with Turkey

At the Helsinki summit in December 1999, the European Union confirmed Turkey’s candidacy. In October 2005 formal accession negotiations began. Despite several hurdles along the way and slow momentum, the accession process is still on.
Before detailing why staying on track for EU membership and forging closer strategic and economic relations with European nations are still in Turkey’s national interests in an emerging multipolar international order, it would be useful to remember the core arguments of pro-European and euroskeptic camps in this debate.

The adherents of euroskeptic discourse question the current form of the EU in general, and the structure of the accession process that Turkey is undergoing in particular. Consistent with their inclination to see the EU as an intergovernmental institution, these circles have found it difficult to accept that our relationship with the EU would be asymmetric. The EU skeptics support integration as long as the whole process relies on a bilateral negotiation process open to give-and-take, rather than Turkey’s internalization of EU’s community law. To them, both parties need each other and therefore the negotiation process should take place between two equals.

Euroskeptics tend to characterize the accession process as an EU policy, the main goals of which are to de-emphasize Turkey’s geopolitically defined strategic identity and create the best possible conditions for Brussels to manage constructively Turkey’s membership aspirations. Within this perspective, it is inconceivable that the accession process can simultaneously serve the interests of both the EU and Turkey.
A basic assumption is that the EU will never admit Turkey as a full member for security reasons. Euroskeptics believe that the EU discriminates against Turkey, a largely Muslim country, on cultural, political, and economic grounds, and they point to Brussels’ preferential treatment of many Central and Eastern European countries as evidence.

Lastly, Euroskeptics underline that the EU will never develop the capacity to absorb Turkey’s membership because Turkey is too poor, too different and too big. Declining public support to EU enlargement across the continent and the emergence of a myriad political, economic and security challenges confronting the member states in recent years will never create a suitable environment for Turkey’s accession in the near future.

Euroskeptics also argue that, rather than contributing to the emergence of a healthy liberal, pluralistic political environment, the ongoing accession process will significantly damage Turkey’s internal fabric and peace. Turkey’s internal stability, unitary state identity, societal cohesion, territorial integrity and modernist conceptualization of its sovereignty would be in danger if EU’s liberal, federal, multicultural and post-modern values were to be adopted alongside the accession process.

The second approach toward the EU is pro-EU discourse. This perspective views the accession process as a means of ensuring and accelerating Turkey’s inclusion in the EU as a full member. The adherents of this view are committed to the idea of European integration and are content with the current structure of the EU. This discourse strongly emphasizes what Turkey needs to do to obtain EU membership – after all, it is Turkey that is knocking on the EU’s door. The underlying assumption here is that as the accession process unfolds, the quality of Turkey’s relationship with the EU will improve. Turkish security will be positively affected because Ankara will gradually embrace the EU’s distinctive security identity, not the other way around.

According to this logic, if Turkey preserves its enthusiasm in seeking compliance with the Copenhagen criteria and fulfills the required steps alongside the accession process it will be harder for the EU to easily terminate the whole process. Pro-EU circles tend to believe that Turkey’s accession process with the EU is good mainly because Turkey’s international standing and ability to cope with external challenges will dramatically improve after accession.

This perspective says that the democratization of the political regime and liberalization of the state-society relations alongside the EU accession process will put the final nail in the coffin of ethnic separatism as well as heal a myriad of social cleavages that pit different societal groups against each other. To pro-Europeans believe Europeanization will offer magical solutions to Turkey’s internal and external perennial problems. They think this is the route through which Turkey will become a strong state at home as well as a credible and powerful actor abroad. Transformation alongside the EU accession process and developing closer relations with European nations will enable Turkey to better deal with the geopolitical challenges of the emerging multipolar world order.

Assessing the implications of the EU membership process on Turkey’s national interests is long overdue. The EU itself might have been in a crisis mood recently and the enthusiasm of Turkish leaders and people alike to seek EU membership might be at low levels today. Yet, Turkey’s relations with Europe are old and multidimensional. Lest the emerging international order aggravates Turkey’s national interests further, Turkish leaders would do well to view the EU accession process and relations with key European powers from a strategic perspective.