Are general elections in Palestine feasible? 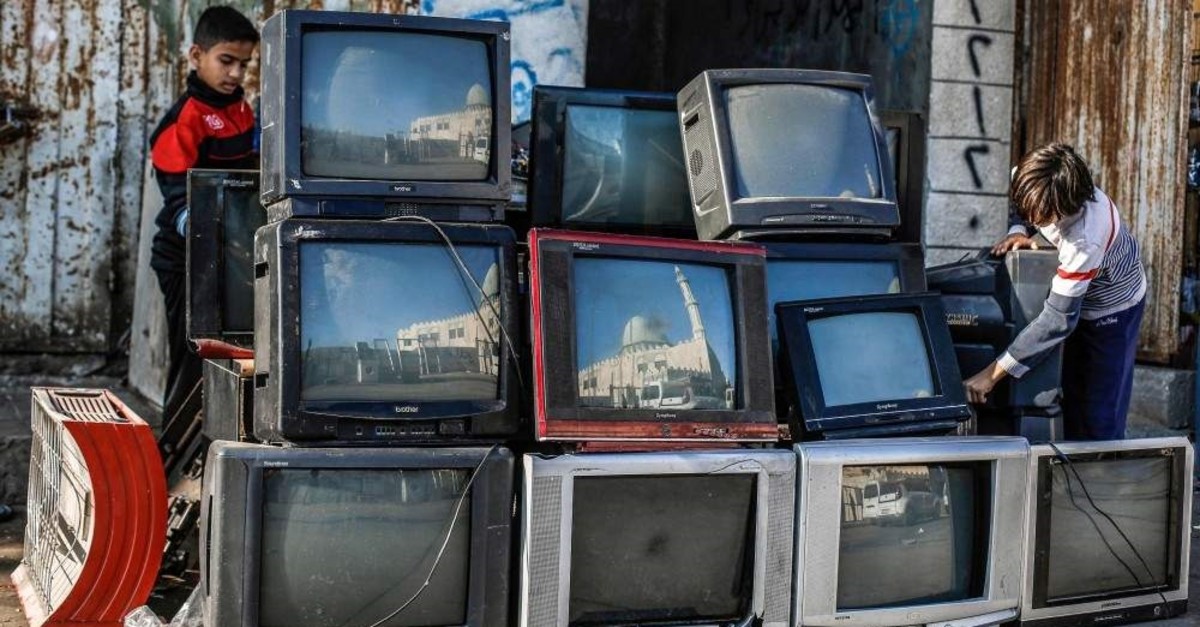 Palestinian children play with old CRT television sets displayed along a street near their home at al-Shati refugee camp in Gaza City, Dec. 6, 2019. (AFP)
by Ali Abo Rezeg Dec 11, 2019 2:04 am
In his annual speech before the U.N. General Assembly in September, Palestinian President Mahmoud Abbas voiced his intention to call for general elections in the Palestinian territories. Abbas’ speech was followed by shuttle diplomacy conducted by Palestinian Electoral Commission head Hanna Naser between the Gaza Strip and the West Bank. His efforts were aimed at bringing the views of Palestinian rivals, Fatah and Hamas, together before heading to the general polls.
Hamas, via many of its spokesmen, said they were “well prepared” for any elections and called for simultaneous parliamentary and presidential polls, with its leader Ismail Haniyyeh affirming for the electoral commission that his group – Gaza Strip’s de facto ruler – would do everything to secure the elections in the blockaded coastal enclave.
President Abbas’ announcement and the rapid welcome of Hamas prompted questions regarding the significance of conducting these elections amid the current Palestinian conditions, and if the move was a top priority for the Palestinian people and their just cause.
Restoring the Palestinian political system via democratic methods is appreciated and a step in the right direction; however, it comes amid ongoing division between the West Bank and the Gaza Strip and amid Israel's ongoing expansion. Also, it excludes the right of millions of diaspora-based Palestinians to vote and choose their representatives, those who are supposed to defend their cause and solve their problems in refuge and migration.
Reconciliation should come first. Dozens of rounds were held to put an end to the 12-year Palestinian rift, but none have seen success. Heading to general elections amid ongoing political, security and judiciary division will do nothing but exacerbate the already complicated situation. How will Palestinians vote if the Ramallah-based judicial body doesn’t recognize the Hamas-run judicial system in Gaza? This would worsen the whole electoral situation. What if a Gaza-based court ruled to ban a Ramallah-affiliated candidate from entering the electoral race and vice versa?
Secondly, the call for holding elections comes amid unprecedented Israeli policies, especially since, adding insult to injury, the Israeli expansionist policies in the West Bank are covered by Washington after U.S. Secretary of State Mike Pompeo announced last month that the U.S. does not consider Israeli settlements in West Bank illegal. This also comes after the U.S.' decision to classify Jerusalem as the “eternal capital” of Israel. Thus, this move is expected to embolden Israel to not allow elections in Jerusalem by not only arresting the candidates but shutting down any electoral center there. This move would deprive hundreds of thousands of Palestinians living there from using their right to choose their legislative bodies.
Excluding the diaspora-based Palestinians is the third dynamic that makes the elections unfeasible. Since the 1948 Nakba, the number of Palestinians living in the diaspora are double or even triple those living inside occupied Palestine. The only body representing both groups of Palestinians was the Palestinian Liberation Organization's (PLO) National Council, which stood as the main legislative body for all Palestinians.
Activating this body by calling for elections should be the top priority of Palestinians, as it revives the broken PLO and reaffirms it as the main representative of the Palestinian people.
*Ph.D. candidate at Ankara Yıldırım Beyazıt University