How to revive Anatolian rugs: An inspiring project in Gördes town 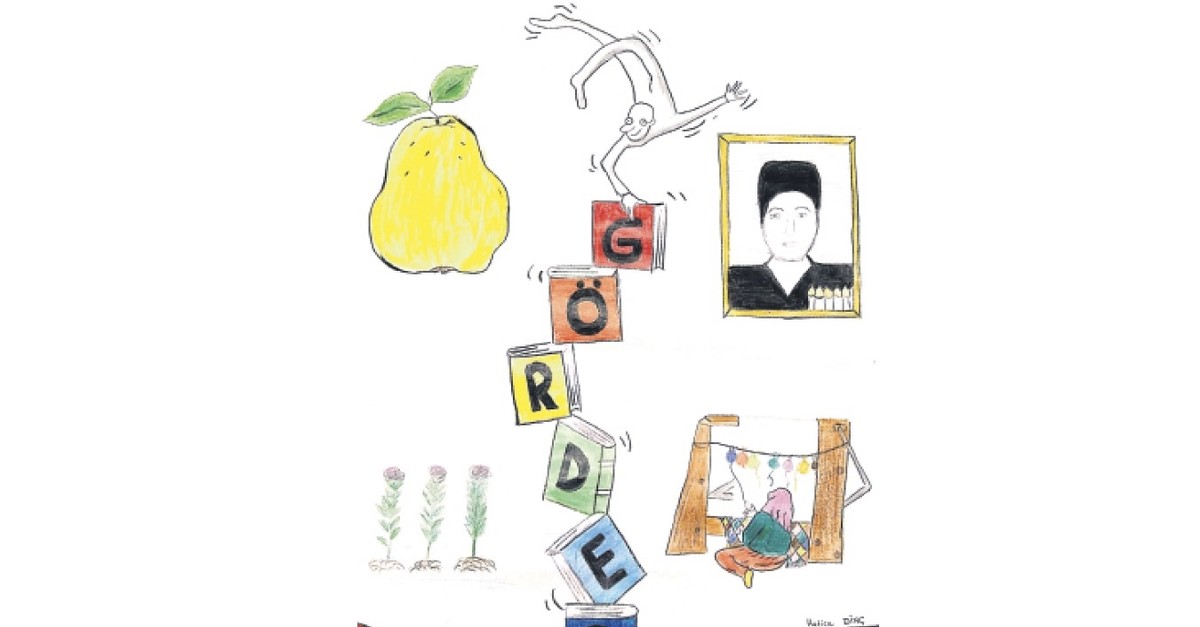 I would like to start my writing with an explanation of the picture featured with this article. The picture depicts Gördes, as drawn by a secondary school student by the name of Hatice Dinç at Fatih Secondary School in Gördes, Manisa, for Daily Sabah. The picture shows quince, tobacco, women weaving rugs, and Shahid Makbule Hanım. This small district has many stories that need to be passed on to future generations.

Gördes is a district with a population of around 30,000 people who are loyal to their state. The town’s economy is mostly based on agriculture. Additionally, Gördes is a historic district; it is associated with the song of Gördes, which was written for Mehmet Efe, who fought in the Turkish War of Independence in 1919 and 1923. Those who wish to listen to a rendition of the song could listen to Izmirli Bedriye Hanım's version. Moreover, according to the book of "Bir Zamanlar Gördes" ("Once upon a time in Gördes"), Evliya Celebi, a famous traveler, visited Gördes in the 1670s.

It should be noted that prominent historical fıgures such as Zagnos Mehmet Pasha and Shahid Makbule Gordes hail from Gördes. There are many other war veterans (ghazi) and martyrs (shahid) who fought in Gallipoli, Romania, Palestine, Egypt, Yemen and the Caucasus who are from this area. Even today there are shahids and ghazis such as Shahid Abdulkadir Çelik, Halil İbrahim Ertaş and Ghazis Suleyman Dindar and Ali Temel from this district. We can say that Shahid Makbule represents the true picture of our all shahids and ghazis.

In this respect, I would like to give examples not from people from afar, but from home, from my own family. I used to talk to the elders in my family, particularly my 73-year-old maternal grandfather, Mehmet Ertem, and my 94-year-old paternal grandmother, Fatma Güler, in regard to the ghazis and shahids in our family who served on the front lines. Ertem would speak calmly, but would almost always finish in tears; we witnessed that whenever he heard the songs of Algeria and Yemen, he remembered Mehmet Dere, his grandfather, a gazhi who was blinded at the hands of enemies in either Algeria or Yemen. The mother of Mehmet and Ramazan Ertem, uncles of my grandfather, prayed to Allah asking to be a mother of one shadid but, in the end, she became the mother of two shahids. Ramazan Ertem was martyred in the battle of Dumlupınar while Mehmet Ertem served in the Black Sea region. These names are only some of the few learned from my grandfather.

There are also shahids and ghazis on my father's side. When I talked to Güler, she mentioned a few names, including Mehmet, İdris İbrahim, Hafız Mustafa Göde, İdris Ahmet, Halil İbraim Döner, Hasan Çavuş, Kaymakam Mehmet, Mehmet, Süleyman and Ali. She went on to say that Hafız Mustafa from Kahyaoğulları took some hair from his child as a memory before leaving for the front lines. Later, Hafız Mustafa became a shahid in Gallipoli. In addition, four uncles of Dervis Hasan Hüseyin were also shahids.

Nowadays, it is not easy to find these types of special artisan rugs. However, there are ways of producing the same product in industrial methods that take away from the authenticity of a hand-made product. I have met several people in regard to the reproduction of these rugs. Our discussions began with questions of what are the challenges for achieving our goal, and how these challenges can be overcome. Additionally, we focused on how to reproduce, rejuvenate, where to start and when such a project can be initiated. We have identified several goals for realizing this project.

The first is to rejuvenate the ways of making these forgotten rugs in this town. The second is to provide maximum employment in this town. The third is to lower migration to other cities. And the fourth is to protect human health by producing these products as it was centuries ago. As we know, in this century, most things that people use in their daily life have chemicals. By using a non-chemical process, these rugs will be unique for buyers to purchase.

In the most difficult projects, there must be teamwork which requires working side-by-side with many others. Therefore, in order to accomplish this challenging project, we need all sorts of support and guidance from the authorities. We are lucky that our project has an entrepreneur, Aziz Aydoğdu, who is a resident of Gördes, in addition to some strong support from Bekir Abacı, the district governor of Gördes, and Ahmet Deniz, the provincial governor of Manisa.

Our teammates are Aydoğdu, Mehmet Sırlan, a director at Ataturk Primary School, Basri Güler, a director at the Public Education Center, Rahim Güler and Hüseyin Çakır. I had personally met with the governor of the district with this team. Every member of our team is eager and excited to begin and complete this tough and demanding project. Additionally, I had discussions with Fatma Güler as well. This is an enormous project that needs great attention from local residents and the authorities, even at the national level. This is more than making money; this is a national duty for my teammates to bring this cultural heritage back to its original form.

We have held several meetings and discussions together as a team. During these activities, we had a productive exchange of ideas that ranged from reaching the local market to reaching the international market. In addition, we brainstormed ways to get enough encouragement, support and correct guidance from the related authorities and agencies. In the end, we concluded informally that there are many governmental agencies that support such unprecedented initiatives, including the Ministry of Tourism and Culture and the Ministry of Family, Labor and Social Services. Local and regional institutions, as well as the municipalities, could also lend a hand to support our initiative. We look forward to strong cooperation and ease of access from these institutions. However, cooperation and ease of access do not necessarily mean direct financial assistance, but rather all kinds of support, as we are going to begin this project with our limited resources very soon.

Aydoğdu will soon start producing the rugs by employing local rug weavers in nearby towns, while my other teammates will do their respective duties. I will write more on Gördes rugs as this process continues.

My wish is that, with the achievement of this project, Gördes will be known once again as one of the rug center of Turkey.