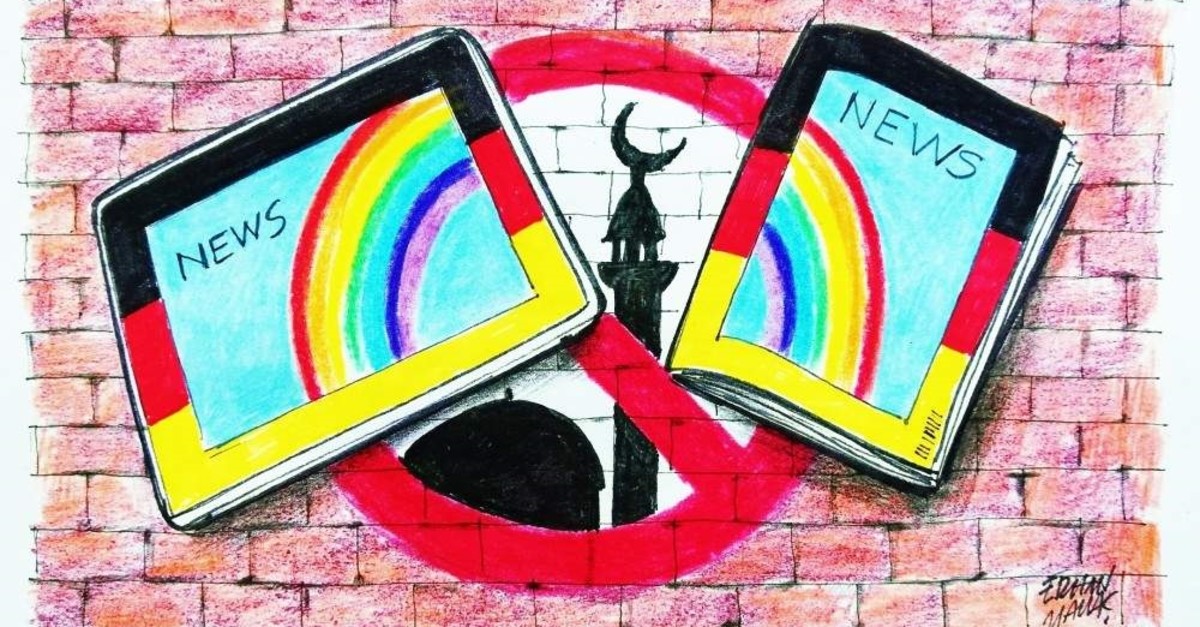 Germany is thought to be a multinational society, but as racial issues reach sky-high levels around the globe, the country too is experiencing an increase in Islamophobia, hate speech and racism.

It was expected that integration problems that first-generation Turks in Germany faced would disappear with the subsequent generations. Yet xenophobia remains and the language of media and politics of late does not help change the attitudes of Germans toward the Turks.

For a German citizen of Turkish-origin to be seen in a photo with President Recep Tayyip Erdoğan is enough for them to be lynched by the German media.

Germans of Turkish origin have been part of the German society for nearly three decades. However, many of them who support politics back in their homelands are often criticized or shunned for doing so. An obvious example is German-Turkish footballer Mesut Özil, who was picked on by the media and football authorities alike for taking a photo with President Recep Tayyip Erdoğan in London, before last year’s World Cup in Russia. Özil faced heavy criticism and eventually decided to retire from the German national team.

Özil said he was subjected to racist abuse during the World Cup when Germany failed to get past the group stages. "When we were knocked out and I came off the pitch, German people were telling me, 'Go back to your country,' 'F*** yourself,' 'Turkish pig' and stuff like that," he said.

"But what upset me most was the reaction of the school I went to in Gelsenkirchen. I've always supported them and we decided to do a year-long program together. I was going to attend a ceremony and meet the staff and children, many of immigrant backgrounds. Everything was planned. But then the school director told my team I should not come because of the media attention and the rise of the right-wing [Alternative for Germany] AfD party in their city. I couldn't believe it. My hometown, my school. I gave them my hand but they didn't give theirs back. I've never felt so unwelcome."
Since Turkey launched Operation Peace Spring in northern Syria, people of Turkish origin have been attacked at least 14 times in Germany, which has a strong presence of the PKK and supporter groups. Several Turks had also been attacked by the PKK following Turkey’s previous counterterrorism operations. It is worrisome that German authorities do not take the necessary precautions despite the PKK being listed as a terrorist organization by the international community.

In other respects, the problem of integration has been voiced frequently. So, what is integration? In an ideal society, this means being able to communicate and interact healthily with the host community. One's differences and culture is respected as long as it does not harm society or affect it negatively. Yet, from time to time in Germany integration means the melting away of one's own culture and tradition to merge completely into theirs.

Hate speech, swastika graffiti, physical assault and arson are among these crimes. One of the reasons why the west is more tolerant toward foreigners and especially Turkish people could be because German society had a broader experience with Turks and foreigners after the Turkish guest workers of the 1960s. Furthermore, the fact that the west is more developed in terms of economy, thus attracting more foreigners, is another reason. The AfD which increased its votes surprisingly during the latest state elections and gained importance in the Bundestag exploited these feelings by fanning the flames of mistrust toward foreigners.

So, what kind of language and methods did the German media use in this context? Freedom of media, thought and speech are the main principles of every democratic society. Albeit, fake news, stereotyping, creating perceptions to enhance hatred and grudges, and creating intentional publications that are biased and distort facts cannot make use of the freedom and privilege a democratic society offers.

Last month, we were in Berlin as guests of the German Foreign Ministry to attend a program on “Fake News? Role and Responsibility of the Media.”

With journalists from all over the world, we discussed the struggle against fake news that is used by some countries as a hybrid and asymmetrical method of war. We listened to Germany’s fight and experiences on this issue with representatives of German public institutions, private and public media. Germany wrestles systematically with disinformation or the new popular term “fake news” by using the law, enhancing the number of literate people and looking at the ethical norms and self-control mechanisms of the media.

Withal, German media seems not to be able to forestall fake news. Notably the fact-check mechanism in news regarding foreigners or other countries, the objectivity of the journalist or institution preparing the news and competences, often reach a level that hurts institutional reputation.

The most tangible example was the fake news about a group of Syrian children published by one of Germany’s most influential media outlets, Der Spiegel. Chief Editor Steffen Klusmann said people like Claas Relotius, who wrote the article, rendering it more difficult for the German media to fight fake news.

The machine to determine to which degree true information and data is spread on social media and new media has not yet been invented. Thus, all countries, especially those ranking high in social media penetration, struggle with the problem of fake news. Turkey is also among these countries. Yet, even though those producing such news seem to be individuals, now and again it is possible to see governmental support behind them.

The archaeology, characteristics and the difficulty of controlling real information must not drive us apart from true information in conventional media. During our visit to Berlin, we have seen the German public and private media’s success in this field.

On the other hand, apart from German media’s sensitivity on this matter, it is difficult to say that representatives from different views, ethnicities, nations and minorities are employed in media institutions. During a conversation with an editor of the public broadcaster ARD, we learned that this situation is also due to a decrease in employment. Perhaps employing more minority representatives, those who have different political views, need to be given equal representation in the German media. Such individuals could prove to be insightful in preventing fake news on foreigners. Today, fake news about different ethnicities, people or political views, can cause the victimization of another one. What is most important is to stick to the truth. In this manner, feeding the truth is the media’s greatest power.

According to the data of the Federal Statistical Office, the number of people of migrant origin living in Germany has risen at a rate of 4.4% in 2017 compared to the previous year. This rate accounts for almost a quarter of the country with a population of 82 million population. In other words, one person out of four is of migrant origin in Germany.

Today, data of German official institutions suggest that 10.9 million foreigners live in the country. Among them, Turks are first at around 1.5 million. Looking at their educational background, we see that 79.5% of Turkish citizens in Germany between the ages 25-40 have a degree while 12.6% are high school graduates. While 94% of German citizens with Turkish roots have a degree.

Meanwhile, the death rate in Germany exceeded the birth rate in 2004. According to the data, the German-origin population in the workforce is decreasing gradually. One of the main causes of this is the concept of family has lost its meaning. Efforts to reverse this is going on. Then again, nearly 55 babies of Turkish-origin are born in Germany every day.

All these statistics suggest how important the role of Turkish origin German citizens will be both quantitatively and qualitatively in the country’s future.

German media not only has a problem of minority representation in their organizations, there is also the issue of how minorities, particularly Turks, are depicted in the German public and private media sector.

However, we see that in Germany the approach in politics, media and the public field toward people of foreign origin and Turks, is getting harsher and more intolerant.

Third generation German-Turks in the country’s workforce is uncomfortable with the anti-Turkey bias on German media.

As I took a taxi to the airport from my hotel in Berlin, the driver was unsurprisingly a young Turk. Oğuzhan Çakmak is a third-generation German citizen of Turkish origin. The 21-year-old is driving a taxi as a part-time job and is a mechanical engineering student at the Technical University of Berlin. Even though he is a third-generation Turk, his Turkish was very proper, he explained that the Turkish community has been the most successfully integrated foreign group in Germany. Despite this, Çakmak is disturbed by the portrayal of the Turks in German media.
“In German media, either Syrian refugees are seen as suspicious without exception or we, the Turkish people are doner-sellers or taxi drivers. According to this depiction, we cannot speak German and are not well educated,” Çakmak said. He said that such a prejudiced depiction of foreigners and Turks continues.
He added that the Turkish workforce and entrepreneurs are making a huge contribution to the German economy. “The reason why Turkish people do not watch German media regarding international relations is because of Turkish-German relations, not because they do not speak or understand German, but rather because German media is highly partisan.”

Again, the differences between Turkey and Germany continue. About data of the German Statistical Office, Turkey ranks first in net figures of migration to Germany from the group of countries in Europe that are not members of the EU. While 40,561 people migrated from Turkey to Germany in 2018, the number of Turkish citizens leaving Germany was 24,071. Thereby the net migration figure from Turkey to Germany is 16,490. This figure was registered as 12,000 in 2017.

As can be seen, migration from Turkey to Germany has been going on for nearly half a century and continues despite a slight slowdown. Yet, a return of first, second and even the third generations is taking place. The reason for this could be the justifications of Oğuzhan Çakmak, the media lynching of Mesut Özil over a simple photo, showing German-Turkish citizens as sympathizers of an illegal organization and general intolerance. The fact that German and Turkish media and public diplomacy instruments require a more concerted effort to dispel negative stereotypes, is a topic that will have to be opened for discussion soon.
*Daily Sabah Ankara Representative
**Daily Sabah Ankara Bureau Reporter