Trump, Turkey and the US: Some predictions for 2020 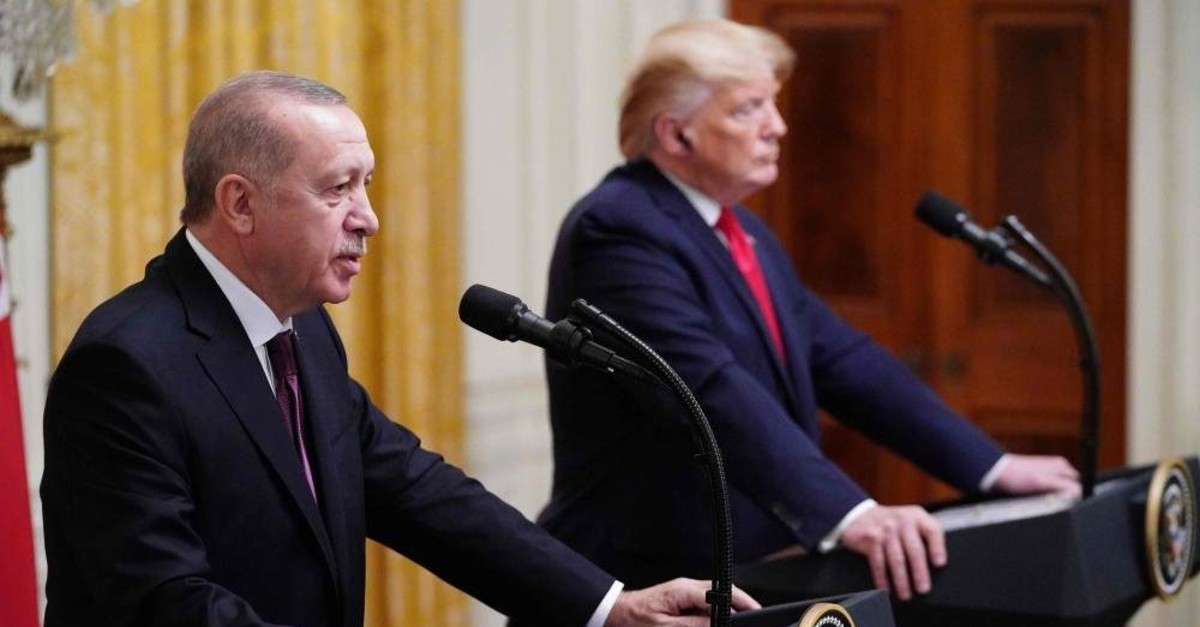 The coming year will bring little movement in Ankara-Washington relations, which could provide the space for Turkey to continue pursuing its own regional and global agendas

On Wednesday, Dec. 18, 2019, the U.S. House of Representatives voted along mainly partisan lines to impeach sitting U.S. President Donald Trump. After months of televised drama, key testimonies and endless coverage in the international media, this conclusion came as little surprise to anyone with access to a mobile phone or an interest in U.S. politics. What comes next here seems equally predictable; although of course very little about the Trump political era can be forecast with any certainty.

As embarrassing and symbolically damaging as the impeachment process has been for Trump, it remains absolutely clear that the Democrats simply don't have the necessary votes in the U.S. Senate – the upper house of the legislative branch of government – needed to successfully impeach Trump. Barring any major unforeseen events that could sway Republican political opinion, it is highly unlikely that they will be able to marshal the votes from their among their Republican colleagues to successfully impeach the president. Key Republican opinion-makers have already made it clear that they would welcome a quick impeachment vote in the Senate, on the totally reasonable ground that their majority assures the process will meet a fast and (for them) comparatively painless death in the upper house. So game over for the Democrats, who will have wasted their energies on a plan that was risky to begin with when considering that the presidential election is looming in November and American voters remain bitterly divided.

This explains why some Democrat strategists, worried about misplaying the impeachment card, are advising their party leaders to delay sending the impeachment vote to the Senate, looking to wear down the White House by using a "death by 1,000 small and sustained cuts" tactic and hoping to pick off some Republican lawmakers who might somehow be convinced to break with the president and vote to impeach. Some pundits have joked that Trump might even simply "get bored" or quit his job if things get too intense; again, in the age of Trump, no option can ever really be ruled out.

Given the current political climate, neither the quick option nor the delay option seems likely to end in a victory for the Democrats, whose problems are being compounded by the fact that have yet to fall in behind a strong presidential candidate for the 2020 election. None of the current Democratic frontrunners – Biden, Sanders or (provisionally) Warren – seem to be able to hold the upper hand among Democratic voters, only adding to the confusion that has reigned on their side of the political divide since Trump won the Oval Office in 2016.

For international observers, the chaos and malaise emanating from inside Washington D.C.'s infamous Beltway looks set to continue for at least another year, offering some much-needed breathing room for foreign governments who wish to pursue their own national interests without Uncle Sam looking too closely over their shoulders. For Turkey, which has been pursuing a consistent, pragmatic and determined multidimensional foreign policy for some time, 2020 looks set to be a year where Ankara can reinforce its current priorities without too much U.S. interference, or even real interest.

It would be no exaggeration to say that the U.S. currently lacks anything resembling a coherent or sustained foreign policy in regards to Turkey. This reality in some sense reflects the current state of American domestic politics, as well as the confusion and interdepartmental struggles which will continue to drag on between the U.S. State Department and the Pentagon, and the legislative and executive branches of the U.S. government.

While there could be some improvement in certain areas of Turkey-U.S. relations – specifically regarding commercial and economic issues, where both countries are looking to mutually benefit from their respective strengths – it looks likely that most of the questions currently plaguing the relationship, ranging from Syria to the F-35 fighter imbroglio and from NATO tensions to the S-400 missile deal with Russia, will continue to remain unresolved, or perhaps even grow worse. What seems especially worrying is that if things do deteriorate, this will be in large part the result of a lack of clarity or consistency from the U.S. side.

It is very difficult to see who is actually steering the ship on the Turkey policy for the Americans. While it is true that President Trump and President Recep Tayyip Erdoğan do seem to share certain affinities, as demonstrated by some of the key decisions they have made through their preferred "leader-to-leader" style of diplomacy, it is equally clear that Trump is also highly inconsistent and, at present, deeply distracted by a host of other foreign and domestic problems. The U.S. State Department is also suffering from an obvious dearth of "Turkey talent" (Syria envoy James Jeffrey might be an exception here), which also reflects its own more general loss of influence under Trump.

Although a seasoned career civil servant with longstanding interests in the Middle East, recently appointed U.S. Ambassador to Ankara David M. Satterfield could not be called a "Turkey expert" by any stretch of the imagination. Rather he has largely built his career around the goal of containing and rolling back Iranian influence in the region and managing American interests as they relate to Iraq, Saudi Arabia and Israel. While impeachment issues and the presidential election will be drawing the main energies in Washington, Satterfield will most likely be spending a good part of the coming year attempting to learn how to navigate the ins and outs of power politics in the Turkish capital.

The Pentagon isn't much better, where the broadly "pro-Turkey" and "anti-Turkey" forces seem to be equal in strength, which is part of the explanation behind Washington's inept handling of a number of vital security issues between the two countries; it isn't hard to see that a lack of unity from the U.S. side has only complicated the NATO, Syria, F-35, S-400 and other regional matters. A Turk can surely agree or disagree with America on any given issue, but what happens when it isn't even clear what the American position is? This lack of clarity has harmed Turkey-U.S. relations even before any questions of substance reach the table.

And this doesn't even begin to address the problems in the U.S. Congress, where lawmakers seem to be interested in working with the current Turkish government on some issues in some months, only to reverse course and move very vocally against Turkey at other times. This is not to evaluate the validity of any recent American decisions, only to point out the state of confusion that seems to currently reign in U.S. policy.

But should this really matter for Ankara? Turkey isn't even close to making Washington's Top 10 list of foreign priorities for 2020; however, being ignored by the Americans isn't necessarily a bad thing.

The view from Ankara

If Washington's role in the region and the world currently seems confused at best, by comparison, the foreign policy scene in the Turkish capital could not be more different. Whatever domestic disputes might preoccupy Turkish voters, and it is important not to underestimate these as President Erdoğan's Justice and Development Party (AK Party) moves into its 18th year in power, most opinion polls indicate that the majority of Turkish people seem to be in broad agreement with their government's handling of key international and regional issues.

Turkey continues to solidify its role as a strong regional power, and given the haphazard moves by the U.S. combined with Turkey's skillful management of diplomatic relations with Russia, this trend looks set to deepen. The drawing down of U.S. involvement in Syria has opened more space for both Turkey and Russia to exercise their own respective goals in the country; moreover, President Erdoğan and his Russian counterpart Vladimir Putin also seem to be using their own leader-to-leader brand of diplomacy to maintain the dialogue between their two states. Turkey and Russia will inevitably have different interests at times in Syria, but the way in which they have chosen to manage their bilateral relations (even in moments of genuine tension) is far more productive than anything the Americans seem able to contribute.

Ankara also has a number of other fairly strong cards it is playing on the global stage. Its diplomatic, cultural and international development efforts have been gradually building stronger ties with countries from Africa to Latin America and Southeast Asia. Turkey might lack the global reach of the U.S., Russia, China or some EU countries, but it has been deploying its soft power options effectively and backing this up with economic deals and trade agreements that could form the foundation of future long-term relations with many countries. It also continues to set itself up as a potential leader in the Muslim world, challenging a number of the more established Gulf-based powers in this regard. And on the issue of Syrian refugees, it has been praised by even some of its most consistent critics for taking the lead in managing the humanitarian crisis on its doorstep; a crisis that much of the world seems content to continue to ignore.

Again, this is not meant to endorse or criticize any specific aspects of current Turkish foreign policy, only to highlight how the lack of U.S. leadership or engagement in the international arena has opened the door for rising regional powers such as Turkey to expand and intensify their own policy priorities. And given that 2020 will be marked by highly dramatic American domestic issues such as the presidential election and the impeachment fight, it seems like a good bet that Ankara might be well-placed to use this space and double down on its own international policy priorities.