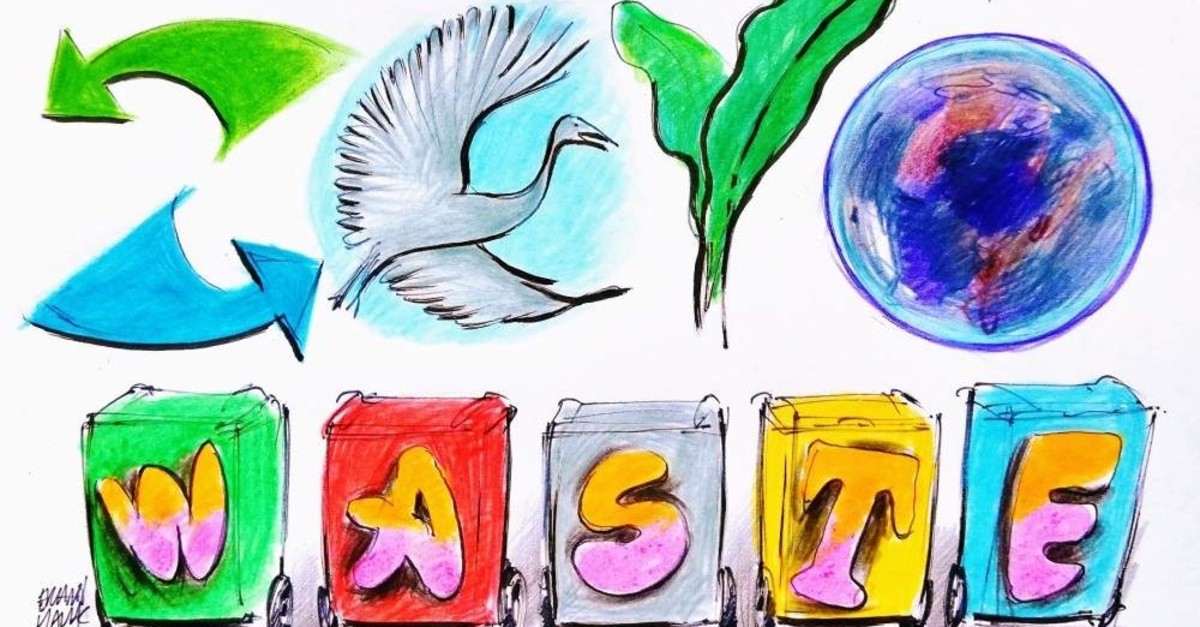 Time seems to fly by. Earth is the sole habitat for human beings, and it is changing more and more. For some, it is changing, while some think it is wearing down and getting older. We have borne witness to stunning developments over the past 200 years in particular. However, improvements in production had societal repercussions following the advent of hydro and steam power and led to progress. The ensuing Third Industrial Revolution, billed as the digital transformation, quickly shifted routines and created a rather consumption-oriented society, so much so that we thought we owned everything. We have exploited natural resources for the sake of a comfortable life. In fact, we are not alone here. We coexist on Earth with 8.7 million other species.

On the other hand, improvements in living conditions have led to a boost in population, as well as in production. The U.N. reports that the global population, which was 1.5 billion in the early 20th century, totaled 3.7 billion in the 1970s following digital progress, particularly in computer and robot technologies. The global population now stands at 7.7 billion, with a more than twofold rise compared with the 1970s.

So, the capacity to process and produce resources increased threefold while consumption quadrupled. All these developments led to faster and more reckless exploitation of natural resources. As a result, we gradually exceeded the world's capacity to regenerate.We consume resources within a few months that are supposed to last for a year. We currently consume resources 1.7 times faster than they can regenerate them. So, this means we are borrowing from the future. This shortens Earth's lifespan.

We produce piles of waste

Besides, the global population is expected to increase from 7.7 billion to 10 billion, with a nearly 35% rise. The fact that the population is to increase by 35% and the amount of waste by 70% shows individual consumption is likely to almost double.

However, only 9% of the waste is recycled. Most of it is randomly released into nature and the seas. This poses a grave threat to water resources and wildlife. Our world is morphing into a massive landfill.

Unfortunately, there is no place left on Earth without man-made damage. Mount Everest, the world's highest peak, is grappling with piles of garbage. It is home to tons of waste. As a solution, the Chinese government shut down the summit for any climb that goes beyond 5,200 meters.

The Mariana Trench is the deepest spot on Earth. Some samples were taken from crabs there. The results were staggering. The crabs contained chemicals and heavy metals 50 times more dangerous than those inhabiting in the most polluted rivers on Earth. Yes, pollution knows no bounds.

Turkey also has seen population growth, development in urban areas and a high percentage of migration to urban settlements as living standards and expectations tend to rise. As a result, we consume more than we used to.

Waste used to be randomly released into nature and drainage canals in Turkey before 1994, an extremely detrimental habit for the environment, soil, ground and underground water, even the air.

A tragic scene unfolded in 1993 in the dumpsite of Hekimbaşı in Ümraniye, Istanbul when there was an explosion that caused 39 deaths. It was a watershed moment for Turkey, especially for Istanbul.

A rapid transformation was underway after 1994. An environmental initiative was kicked off under the leadership of President Recep Tayyip Erdoğan, who served as the metropolitan mayor at the time. Sanitary landfills have since been established to dispose of waste in an efficient manner. Likewise, the number of sanitary landfills is on the rise.

In 2002, Turkey had only 15 sanitary landfills that served only 23% of the whole population. Some quick reforms and investments have brought the number up to 89 now. They can now serve 76% of the population.

It goes without saying landfills are not a one-size-fits-all solution. Our world has limited resources. We are aware of the fact that we must adopt perspectives to "use as much as we need" or "reuse it all" rather than using "one-way disposables" in an effort to make more efficient use of resources.

To this end, we have taken a new step. We have kicked off a transformative movement. It started at the service building of the Ministry of Environment and Urbanization: the Zero Waste Project.

The project was undoubtedly in need of sponsors to achieve its goals. In fact, we have been intending to do something about waste management since the 1990s. We actually have. We built sanitary landfills to ensure waste dumped around will not harm the environment, human beings, the seas and other creatures. However, it is not enough.

The world now considers waste a resource with economic and industrial benefits as it is reused. Technology makes this possible. So, we have made investments, sponsored industrialists and amended our legislation. As a result, the rate of recycling has increased from 1% to 13% in 25 years.

However, we must make sure it further increases considering it is over 40% in most European countries.

That is why we kicked off the Zero Waste Project; however, additional support was needed for success, high-level, genuine and permanent support.

And the long-awaited day arrived, and it came from the top level. First lady Emine Erdoğan has devoted a significant amount of time and effort to this cause since the day we presented it to her. She became the guardian of the project as the sole first lady to raise the issue on the global agenda. She grew into the leader of an unprecedented environmental movement.

Since then, she has spoken on platforms where we haven't before. It was not just a project. It became a mobilization, a movement. She started by building a robust team and called on all organizations to join forces in mobilization and build on them.

Emine Erdoğan has been on stage to do whatever necessary as part of the project. She called on mayors and governors to take action.

The efforts began to see progress, and 400,000 people were provided with training in two years. Some 25,000 public buildings such as schools, hospitals and administrative premises are now equipped with a zero-waste system. Waste is now being collected by type. It is recycled and turned into products to serve as a raw material for industrialists. Organic waste such as vegetables and fruits is turned into compost. It is put to use as manure in parks and greenery zones. Leftover foods are now shipped to animal shelters.

Any waste is reused rather than being sent to landfills. This is because "waste is merely a raw material in the wrong place," as noted by Frederick Talbot in his book 100 years ago.

As a result, garbage trucks leave empty when they visit buildings honoring the zero-waste approach.

Turkey is undergoing a transformation. We are going back to basics. Our culture has never had room for wastage and overconsumption. We have always been a nation that acts in line with the motto "enough is as good as a feast," and we will continue to be that way.

The zero-waste legislation was introduced to make it more functional and follow developments.

The first lady's support was not confined to domestic actions. She attended a myriad of international events and traveled thousands of kilometers to do so. She took the floor as a part of high-level meetings and events held in many countries and lands ranging from North America to the Far East, and Central Africa to the Balkans. She touched upon the zero waste vision adopted by Turkey and called upon other first ladies to take action.

As a part of the U.N. summit held last year in the United States, she met and exchanged views with Jeffrey Sachs, the world-renowned professor of economics and the director of the Earth Institute at Columbia University.

Invited to the meeting on the Middle East and North Africa held by the World Economic Forum (WEF) in Jordan back in April 2019, the first lady offered insight into the Zero Waste Project for the participants. Dwelling on the importance of the zero-waste vision for the future of Earth, the first lady addressed the young participants in particular to underline the fact that 2,700 liters of water is wasted for manufacturing a T-shirt only used for a short period of time and then thrown away, and that this lifestyle has to change immediately.

She maintained her drive. In June 2019, she attended the G20 leaders' summit held in Japan. She talked about the zero waste vision there, too. This time, she was rather focused on the seas and water resources as the session was organized in Osaka, which is known as the "City of Water."

She mentioned plastic waste as a nuisance that poses a threat to water and that fish would be replaced by plastics by 2050 if preventative steps are not taken. She called on the wives of all the leaders to join the collective action for plastic waste pollution that threatens waters across the globe.

As noted before, the 2023 goal is ambitious, including jobs for no fewer than 100,000 people, TL 20 million in revenue generated on an annual basis, meeting the current deficit, which stands at 8% and so on. Yes, Turkey is changing. A transformation is underway. Changes are usually painful, but outcomes can be good. If some support is offered from high-level officials, things get easier.

We keep everything on track and take firm steps as a part of the zero-waste initiative that attaches pivotal importance to saving resources under the auspices of the first lady. We exert efforts to pass on better air and water quality, greener landscape and bluer sky to the next generation.

By 2023, waste that pollutes waters, seas, forests and nature, in general, will not be around. The zero-waste project has grown into an umbrella initiative now. We have a zero-waste vision now. We have kicked it off for solid waste. It is going to be launched for clean water and clean air initiatives, too. Under the leadership and auspices of the first lady yet again.