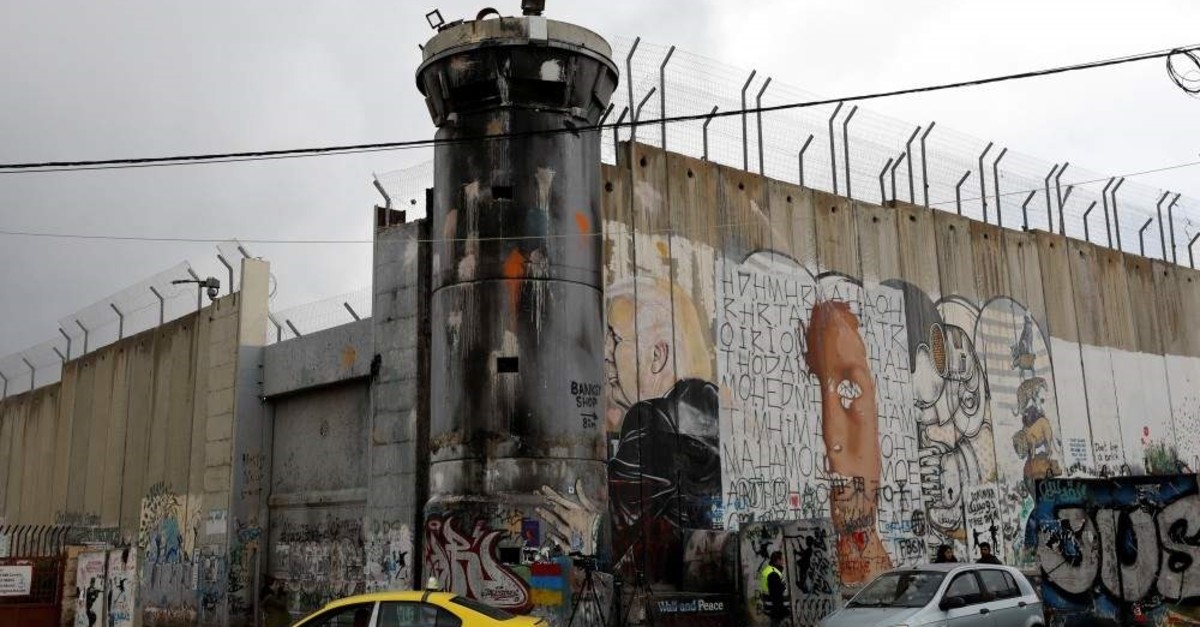 An anti-U.S. President Donald Trump mural is seen on a section of the Israeli barrier and a watchtower in Bethlehem in the Israeli-occupied West Bank, Jan. 29, 2020. (REUTERS Photo)
by Ali Abo Rezeg Jan 31, 2020 2:14 am

What happens next in response to U.S. President Donald Trump's White House meeting with Israeli Prime Minister Benjamin Netanyahu and head of the Israeli opposition Benny Gantz will be extremely decisive for the fate of the decadeslong conflict which has raged between Israel and Palestine; talks having centered around Trump's backchannel peace plan, what the president refers to as the "Deal of the Century."

What's remarkable here is that in the formulation of the plan, U.S. policymakers have totally disregarded the Palestinian side – as if the nation constitutes not even a party in the fight. Moreover, it is the first time ever we have seen a peace plan being brazenly imposed (instead of negotiated) by a broker on one side in favor of the other, in a move that bares the true face of the U.S. as a superpower assuming a destabilizing role in the war-torn region.

What makes the Palestinians largely outraged about the so-called peace deal is its aim to give large swathes of the West Bank to Israel. Hence, this move would legalize the Israeli expansionist policies in the West Bank, giving it a fake right to expel the indigenous people, allowing for thousands of bandits to arrive from abroad to be housed on the rubble of the formers' homes.

It also aims at building a Palestinian state in the coastal enclave of the Gaza Strip, a place, according to many international NGOs, that may become uninhabitable over the course of the 2020s. Gazans have languished for more than 13 years under the scourge of an inhumane blockade by air, land and sea, resulting in the most polluted area in the world with the highest unemployment rate to boot.

The question to ask in this regard is how the Palestinians are expected to react to this serious and unprecedented development. What should the reaction of Arabs, the Muslim nations and all free people worldwide be?

It is time to call for an urgent meeting that includes all spectrums of Palestinian society with a view to agreeing on an urgent plan to confront the U.S. and Israeli's brazen arrogance and boastfulness. It is time to announce a week of anger against the U.S.' controversial deal which not only flouts Palestinians but disregards their inalienable "right of return" and "right of self-determination." It is the exact time to wage the third popular Palestinian Intifada to prompt the U.S. and Israelis to recognize Palestinian rights.

The Arab and Muslim worlds should also have a unified response to this shameless move. Those countries should, at least, cut their ties with the apartheid state of Israel. It is time for people to act, given that regional organizations such as the Arab League and the Organization of Islamic Cooperation (OIC) have proved unable to force the Israeli side to cease its attacks against the Palestinian people. It is the exact time for people to organize daily sit-ins in front of Israeli embassies in their countries to expose the true Israeli face which had been no longer seeking to maintain international peace and security.

Those friendly to the Palestinian cause, mainly those in Turkey, South Africa, Ireland, Pakistan, Malaysia, Cuba and Venezuela, should speak out to stop the plan which aims at nothing but putting a halt to Palestinian aspirations. Free peoples the world-over must coordinate their efforts with pro-Palestine organizations scattered across five continents. An urgent meeting should be held soon, with Turkey as a host, to discuss how to help Palestinians annul this plan and replace it with a unified move on an international level.

It is time for Palestinians to act more on the popular level and for Arab and Muslim countries to reconsider their relationship with the apartheid Israeli entity. International pro-Palestine organizations should, for their part, actively coordinate efforts to protect the Palestinian cause from being totally liquefied. The year 2020 seems an extremely decisive one for the Palestinian people and their wholly just cause.