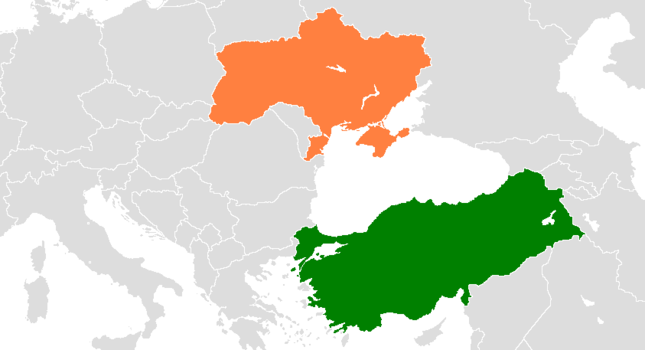 by Baha Erbaş Mar 03, 2014 12:00 am
Nowadays Ukraine is enduring the most crucial and the most painful period since it gained independence. The country has been witnessing political chaos as demonstrations were staged everywhere for months. Protesters demanded for the resignation of President Viktor Yanukovych, and so it happened. Yanukovych fled the country recently.

President Yanukovych had been stalling a Ukraine-EU partnership agreement which has been in negotiation for years, and the EU eventually suspended attempts for an agreement.

Actually, it was Yanukovych's intention to push the European Union into such a position that would result in the suspension of the planned agreement. Today, the people who lead Ukraine are under Russian pressure. Putin has stated on many occasions that Russia is against such an agreement between Ukraine and the EU, and that Ukraine should always remain close to Russia.

He also said, "Ukraine should be a part of the customs union that was set up by Russia with Belarus and Kazakhstan, and in the long term, it should be a member of a Eurasian Union, not the European Union." A Eurasian Union led by Russia seems to be the biggest Russian dream, yet it is not very compatible with economic realities. Russia, Belarus and Kazakhstan launched the Eurasian Commission after the agreement on the customs union came into force. The commission commenced its activities and clearly its most important mission is to include Ukraine as a member.

These developments are not about Ukraine alone, nor will they affect the future of Ukraine only. Ukraine's future relationship is one of the most crucial factors that will affect the relations of former Soviet Bloc countries in Eastern Europe with Russia and the West. Therefore, Ukraine's decision on its future will be the strategic development, perhaps the most important one, to determine the future of Russia's relations with both the U.S. and the EU along with Germany -the heart of the EU.

Ukraine's political, social and economic structure requires the country to manage a very sensitive and skillful balance between Russia and the EU, especially because of its ethnic and religious diversity. While the highly industrialized, rich and Catholic Western Ukraine is pro-West and pro-EU, the poor and Orthodox Eastern Ukraine seems to be pro-Russia.

In geopolitical terms, Ukraine, similar to Turkey, benefits from having both Eastern and Western identities, yet it also suffers from the burdens this imposes. This sensitive situation forces the two countries to consider the advantages and disadvantages of the East and West. The political orientations and regional alliances of both countries bear the potential to deeply affect the entire area ranging from the Baltic to the Black Sea and the Caucasus to the Caspian Sea and Central Asia. Hence, their choice of orientation towards the East or West requires a very sensitive balance. For other powers from the East, Ukraine is the only door to Eastern Europe and the Balkans. For a power that extends from the West to the East, Ukraine is the only path to the Black Sea, the Caucasus and in particular to Caspian oil. Hitler's siege of Stalingrad sprang from the same idea.

Today, the reflection of this strategic balance in real politics is that Europe cannot wrest a position in the East from a power -which Putin claims Russia to be- that rises from the East and totally controls Ukraine. The goal behind all of Putin's efforts and ambition regarding Ukraine is the grand prize that Ukraine presents. According to Putin, it is not possible for a Eurasian Union to become a global power, for Russia to keep up its guard against the U.S. and the EU in Eastern Europe, the Balkans and the Black Sea, unless Russia keeps Ukraine under control. Therefore, Ukraine is the essential key for both the customs union and the Eurasian Union. Ukraine being the only route for Russian gas -which Russia uses as an efficient weapon in the international arena- is another reason why it must not slip away from Russia's intimidating control.

Eurasia is an axis and both Turkey and Ukraine sit at the center of this axis. A possible break at one of these two points would create enormous and deep political earthquakes that would shake both the East and the West of Eurasia, possibly changing the course of history. Therefore, anything that casts a shadow on the future of Ukraine, will first and foremost affect Turkey. It is among the most crucial interests of Turkey and the West for Ukraine to preserve its freedom and territorial integrity.
Last Update: Nov 20, 2014 11:27 pm
RELATED TOPICS