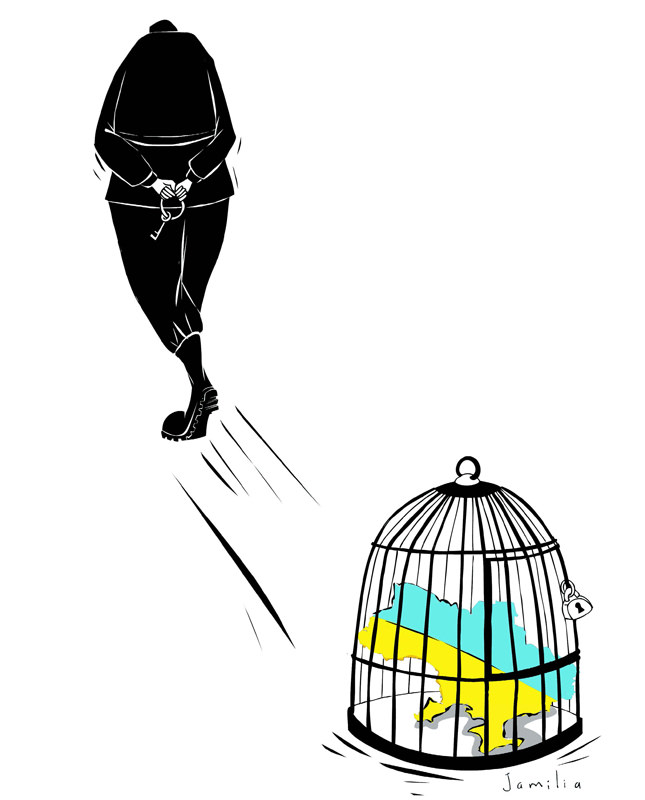 Ukraine today is an embodiment of most former Soviet countries' worst nightmare since independence.

In November 2013, Ukraine's pro-Russian President Viktor Yanukovych suspended talks on a trade pact with the European Union, a decision which set in motion events that led to his eventual removal last month. Months of massive demonstrations, coupled with widespread violence, revealed identity issues in the former Soviet landscape and their potential to influence political developments.

To make matters worse, such rapid transformation took place in Ukraine, a key Eurasian country that Samuel Huntington famously identified as a "torn country" in his controversial work titled "The Clash of Civilizations."

There is little doubt that Russian identity was traumatized as the Soviet Union evolved into the Russian Federation, which represented a transformation from empire to nationstate.

The period of change in the early 1990s was only comparable to the Russian modernization, the Romanov Dynasty's downfall and the October Revolution. Ethnic Russian minorities dispersed across emerging nation-states when the USSR dissolved eventually came to pose the leading identity challenge in the former Soviet geography. Almost overnight, 25.3 million ethnic Russians, who, according a 1989 Soviet census, resided outside Russian soil, became part of a sizeable diaspora in newly-formed nation-states.

The presence of 25 million Russians in the Russian Federation's immediate surroundings effectively rendered their new countries vulnerable to Moscow's military, political and economic advances. One could safely argue that Ukraine today represents an embodiment of most former Soviet countries' worst nightmare since their independence. As such, ethnoreligious struggles and Russian influences in the Crimea hint at similar developments in Ukraine as well as the broader Eurasian landscape.

Although many observers claimed that Ukraine's regional, ethnic, religious and political divisions since the early 1990s took place between the country's eastern and western provinces split by the Dnieper River, historic experiences, economic activities, ethnic composition and foreign relations would indicate that there are indeed four distinct regions: The far east, the south, the center and Crimea.

While ethnic Russians constitute approximately 45 percent of the far east region including major urban centers such as Donetsk and Luhansk, many residents communicate in the Russian language. The area, home to most of Ukraine's industrial facilities and urban population, has a long border and strong relations with the Russian Federation, which remains interested in protecting the Russian-speaking residents across its borders. Similarly, the southern population includes a sizeable Russian community that contributes to its overall lack of Ukrainian identity and considerable ties with Russian heritage.

Unlike the aforementioned parts of Ukraine, the country's western half primarily consists of ethnic Ukrainians who speak the national language. Ukrainian national fervor, mostly based on anti-Russian sentiments, remains remarkably high in these parts whose history, ethnic composition and economy differs from the rest. Ukrainian nationalism is particularly popular in Galicia, Lviv and Ternopil while the region's largely agricultural economy motivates the local population to view Europe as an important partner across the board.

Similarly, Kiev and the country's geographical center is home to a Ukrainian majority although the Russian language remains quite popular in urban areas. Since Ukrainian independence, the population adopted a moderate political stance while resisting the west's nationalism and the east's protests.

Given Ukraine's diverse nature, Crimea deserves to be analyzed as the country's sole oblast with an ethnic Russian majority and considerable semblance with the country's pro-Russian east. Compared to a sizeable Russian community that constitutes 60 percent of the local population, Ukrainians represent approximately 25 percent while another 12 to 15 percent are Tatars. Although the Crimean population opted for an autonomous republic within Ukraine, the area consistently remained crucial to ethnic relations across the country. It was against this backdrop of historic tendencies that the local Russian population revolted against the newlyformed government in the capital and demanded a referendum, which reminded many observers of Donetsk's request for a similar vote following the Orange revolution in 2004.

Throughout the 1990s, fundamental disagreements between the west and the east shaped Ukrainian elections as well as a characteristic struggle between national politicians Leonid Kravchuk and Leonid Kuchma. In the 1994 presidential race, the former claimed 73 percent of the vote to the west of Dnieper while the latter led with 75 percent in districts to the east of the river. To put things in perspective, Kuchma received support from Crimea, Luhansk and Donetsk while Kravchuk sought to capitalize on his popularity in Lviv and Ternopil.

Not surprisingly, the Orange revolution also reflected underlying ethnic and regional tensions in Ukraine. During the elections, Viktor Yanukovych represented the pro-Russian half of the country while pro-Western groups supported Viktor Yushchenko. While Russia, Belarus and various Central Asian republics were quick to recognize the former's contested victory, the United States and the European Union pushed for a repeat election. As the international community was divided between the two camps, Donetsk's demand for autonomous rule poured fuel to the fire while the crisis spread to divisions between various churches.

A new consensus could have emerged in Ukraine if the parties had reached an agreement in February. Unlike in 2004, when the EU brokered a deal between rivals, conflict erupted a decade later as similar attempts, at least for the time being, failed to bring peace to the country. Clearly, the Russian government's military involvement in Crimea pushes Ukrainians toward further polarization and away from an - albeit challenging - political reconciliation.

Faced with renewed crisis across the Black Sea, it remains to be seen what position Turkey will assume in coming days.
The country has historically strived to protect the Tatar population which was reduced to an ethnic minority due to mass exiles under Soviet rule. Furthermore, Turkey's efforts to promote the peninsula's historic and cultural heritage effectively rendered it an integral part of the ongoing conversation.

From the onset of the Ukrainian crisis, the Turkish government emphasized the need to maintain the country's territorial integrity to ensure the population's well-being.

Ankara has continued its efforts to keep Tatars, who sided with the Ukrainians thus far, from getting involved in ethnic conflict.
In Ukraine, the Russian government is seeking to exploit the West's unconvincing stance on Syria. Encouraged by inaction, Moscow today boldly accuses its rivals of playing favorites and aggravating ongoing turmoil, an argument that conveniently legitimizes Russian military involvement in the country. Over the past two decades since Ukrainian independence, domestic and international developments merely served to further ethnic and regional polarization. In 2004, President Kuchma's strong stance on Donetsk's bid for autonomy had prevented the country's dissolution.

This time around, however, the country faces a more serious battle between democratic reconciliation and dissolution over Crimea.