The cognitive dissonance of Saeb Erekat 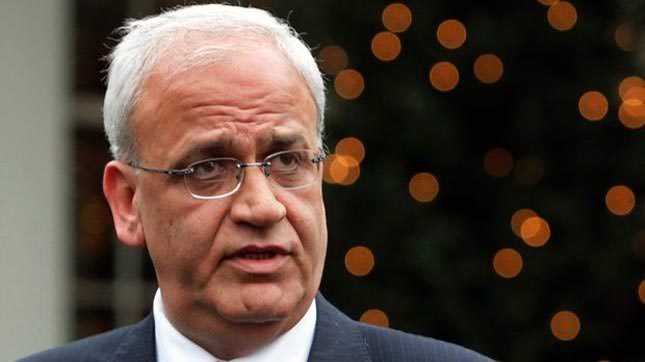 by Sabrien Amrov Mar 12, 2014 12:00 am
The chief negotiator of the Palestinian Authority (PA), Dr. Saeb Erekat, recently sat down with Mehdi Hassan for a recording of Al Jazeera's "Head to Head" program. Hassan challenged Dr. Erekat on the political strategies of the PA in light of the new Americanled peace negotiation saga.

Having resigned eight times in the last 20 years over peace talk impasses, Dr. Erekat has a long history of saying one thing and doing the other. In the 45 minute conversation, the disquieting chief negotiator demonstrated a worrying case of incoherence and disharmony of thoughts.

For one, Dr. Erekat admitted that Israel is an apartheid state, a reality that he claims "the international community cannot stomach." However, Erekat is comfortable with engaging with an Israeli negotiation team of which the head negotiator, Tzipi Livni, is recorded to having admitted that she "doesn't believe in Human Rights" (The Palestine Papers, "Meeting Minutes March 21, 2006 at NAD,"
Al Jazeera Transparency Unit).

When asked about armed resistance, Dr. Erekat explained that every Palestinian has the right to resist the occupation. However, the PA has been engaged in an ongoing operation to suppress armed resistance, targeting in particular the refugee camp of Jenin, considered the hub of what is left of militant resistance.

Even when it comes to the more accepted non-violent resistance strategies such as the Boycott Divestment and Sanction (BDS) campaign, Erekat failed to provide a clear stance of support in favor of the transitional advocacy movement. Instead, Erekat responded by suggesting that any legal stance is welcomed but that the PA cannot speak on BDS while it is in negotiation with Israel. If you proclaim yourself as the representative of the Palestinian people but you are unable to support the most influential strategy to counter the occupation on an international scale, then there is a clear gap between what think your role is and what you are doing.

Later, Erekat claimed to want to end the occupation but the PA has been an effective sub-contractor, giving cover to the system of oppression since the Oslo Accords. Erekat said he wants to "save the lives of Israelis and Palestinians," yet Palestinian youth are getting shot and killed by the Israeli army on a daily basis, as the killing of 22-year-old Mot'azz Washaha in Birzeit reminded us just recently.

Despite both his practical and theoretical incoherence, Erekat wants Palestinians to see his decisions to continue negotiations as some kind of sacrifice worthy of popular recognition and a future autobiography of his "parcours." He sees his stubbornness as a decision that merits some level of respect and gratitude instead of the ongoing criticism he is often subject to. He went so far as to label himself the "most disadvantaged negotiator in the history of mankind" and seems to be looking for some kind of sympathy from the audience.

Indeed, Dr. Erekat's incoherence mirrors the lack of harmony between what the PA says it is doing and what the PA is actually doing. This cognitive dissonance is perhaps the greatest burden on the Palestinian people today.