The EU's Turkey Policies: Promotion of Democracy vs Interventionism 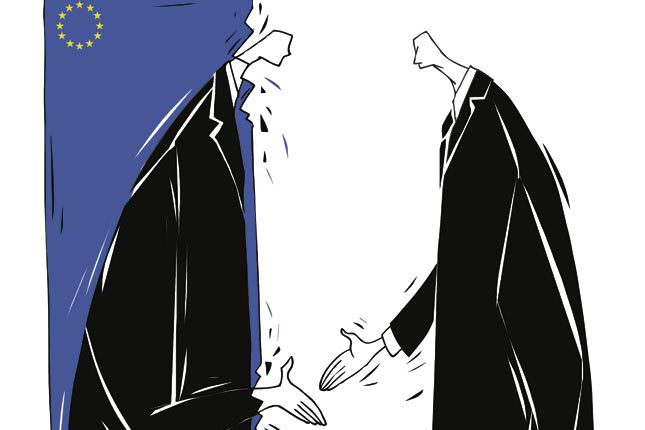 While Islamophobia and conservative governments in Europe may be discouraging, Turkey must work with proponents of a more balanced relationship

A fair assessment of European Union policy on Turkey is that it displays significant fluctuations based on the specific period of time and who the decision makers are; therefore, it does not follow a consistent path. While the EU at times offers strong support for Turkey's democratization efforts, it occasionally works against its fundamental principles, including the promotion of democracy. In order to accurately analyze EU policy on Turkey, it is useful to take a brief look at the tumultuous history of Turkish democracy and recall the country's significance to the EU.

First and foremost, it is important to remember that Turkey is a country whose history and culture make it European as much as Middle Eastern. Without spending undue time discussing the significant relevance of the Ottoman Empire in European politics, it would be better to emphasize that the Turkish Republic, heir to the Ottomans, opted to remain part of the European continent and sought membership in European institutions from the 1950s onward. Today, the country remains an active member of Western organizations; including economic and military partnerships like the OEDC and NATO, as well as political institutions such as the Council of Europe, that seek to protect human rights and promote democracy. Furthermore, successive governments demonstrated strong interest in improving the nation's democratic credentials and human rights record, thereby placing full membership in the European Union among Turkey's primary objectives. Turkey has, however, had to endure various obstacles since its initial application to the European Economic Community (EEC) back in 1959.

Meanwhile, Turkish democracy suffered a number of interventions beginning with a 1960 military coup. Every following decade witnessed multiple military coups, attempted and actual, that attested to the military and civilian bureaucracy's unwillingness to wait for elected governments to be voted out of office. During this period, the military stepped in where the judiciary and others failed to render elected officials unable to govern the country. The Justice and Development Party (AK Party) came to experience such pressures from theoretically apolitical institutions following its rise to power in 2002, as a number of attempted military interventions as well as a 2008 closure trial where the Constitutional Court reached a 6-5 decision to declare the party not guilty. Similarly, the past months set the stage for a new series of plans to bypass the electoral system and topple the AK Party government.

Following this brief summary, let us now analyze Brussels' stance toward Turkey's ongoing struggle for democracy even though it remains difficult, as mentioned above, to speak of a consistent EU position on the matter. A striking case in point is the Union's shocking silence in the face of what came to be known as the "postmodern coup" of Feb. 28, 1997, in contrast to its pivotal role in dismantling the military guardianship regime -a major obstacle before democratization- during the initial years of AK Party rule. These two historic processes help demonstrate why the EU's position on Turkish democracy varied over the years.

Primarily, it is important to note that the Union's policies on Turkey often reflect competing notions about the EU's relationship with Turkey and its EU membership that various European cliques advocate. Historically, political developments in Germany, which hold considerable influence over European foreign policy, inevitably affect the Union's stance toward Turkey. Gerhard Schröder's social democratic government, for instance, adopted a straightforward position that identified democratic shortcomings, not religion or geographic location, as Turkey's main challenge in seeking full membership. Unsurprisingly, the EU offered exceptional support to strengthening Turkish democracy and improving the country's human rights record between 2002 and 2005 when Berlin and Ankara saw eye to eye on Turkey's EU membership. In contrast, both the German government and other prominent EU members failed to speak out against the postmodern coup in 1997 when the Helmut Kohl government, a staunch opponent of Turkish membership, was in power.

At the time, the military's attacks on Turkish democracy represented a convenient excuse for the European leadership to rule out the possibility of formalizing the EU's ties with Ankara.

Moreover, the rise of Islamophobia across the European continent seems to have left the EU confused about its relationship with Turkey and its predominantly Muslim neighbors. Certain political actors that imagine the Union to be some kind of a "Christian club" tend to view the Muslim communities to the south and the southeast as the "other" that forms the basis of a new Christian identity while reducing the Union's ties with these groups to mere power politics. Perceiving Islam and Muslims as a threat to the EU, European conservatives tend to lend their support to secularist governments over Islamist parties whose gain, they believe, is Europe's loss. In line with the above, there is no reason to believe that the postmodern coup against then-Prime Minister Necmettin Erbakan, an Islamist politician, bothered then-Chancellor Helmut Kohl of the Christian Democrats in the slightest.

In contrast, political actors that describe the EU on the basis of common values, including democracy and the rule of law as opposed to religion, continue to believe that mutually beneficial relations with Muslim neighbors remains a viable option for Europe. Such an approach that does not view Muslim identity to be an impediment on a given country's EU membership welcomes the possibility of European countries like Turkey and Albania becoming EU members in the future.

To recall the earlier example, it did not bother the Schröder government to cooperate with Turkey's Erdoğan whom the conservatives like to call an Islamist. In other words, there seems to be a clear distinction between the EU's policies toward Turkey under European politicians with different influences.

Another source of change in the Union's position toward Turkey has been the different views of European leaders on the EU's guiding principles in forming relations with non-members.

Roughly speaking, there are two lines of thinking in Europe regarding the Union's policies toward countries like Turkey: According to some observers, it is necessary for such countries to follow the path that Brussels would draw out for them even if they do not become full members - an embodiment of Europe's historic attitudes. As such, any means necessary would be acceptable to remove Turkish governments from power if they fail to comply with EU policies and hurt European interests. For many in this camp, extreme options, including suspending democracy and supporting anti-democratic efforts, are not off the table.

Struggling against the aforementioned group, which we can simply call interventionists, are members of a competing clique that believe the EU should work with countries like Turkey based on mutual dependency to maximize benefits for both parties involved. Believing that Europe must abandon its obsolete interventionist mindset to promote cooperation and mutual trust with its neighbors, this approach posits that interventionist policies only work to aggravate existing problems in non-member states and eventually transform them into greater threats to the continent. As such, this line of thinking advocates a stronger commitment to promote democracy in Turkey instead of engaging the country on the basis of power politics in an attempt to shape its political leadership and dictate policy.

Instead, they believe in the merits of cooperating with any political party that came to power through democratic means while opposing their removal through anti-democratic methods.

Given the multitude of attitudes within the European Union toward Turkey, the Turkish government must be aware of such fragmentation in devising its European policies. Considering that there are, and have always been, circles within the EU that seek to develop a healthy and balanced relationship with Turkey based on mutual trust, authorities must remain committed to working with such actors and contribute to strengthening their position within European institutions.