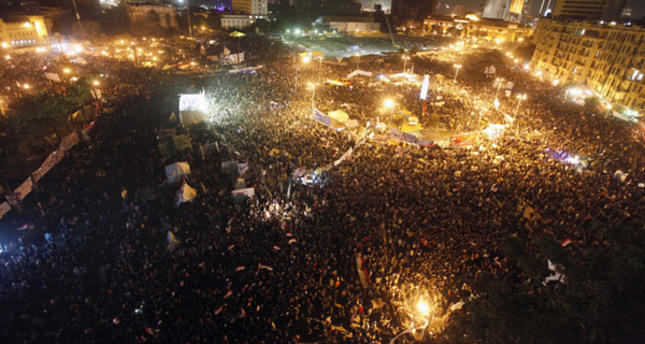 by Şaban Kardaş Mar 14, 2014 12:00 am
With its third year over, the Arab Spring is increasingly viewed in security-centric terms. The initial prognoses for democratization have given way to mixed feelings about the future direction of regional transformation. The authoritarian comeback in Egypt, an ongoing conflict in Libya and the Syrian civil war have all altered the regional and extra-regional perceptions, generating defensive reactions. Today, the Middle East is perceived riskier than was at the outset of the Arab Spring.

The risk factors are manifold, but they can be discussed under four headings: First, borders have been opened for discussion. Regional turmoil dealt a serious blow to the Sykes-Picot and Camp David agreements. The borders became less relevant due to the movement of refugees, militants, arms and other supplies across borders without control and regulation. Another manifestation and driver of this process was the mismatch between borders and societies. Moreover, subnational identities became politicized and served as tools for political and military mobilization. Ethnic, tribal, local or sectarian grievances increasingly emerged as markers of the conflict in Syria and Libya to overshadow the initial democratic character of opposition. Again, the cross-border nature of those identities exerts yet additional pressure on territorial integrity.

Second, popular upheavals led to the erosion of national authority, raising issues of legitimacy and governance. Initially, the Arab Spring was a direct challenge to the legitimacy of governments, as it was grounded in calls for good governance. Some regimes like the Gulf monarchies managed to weather the storm, either through gradual reforms or a mix of sticks and carrots. Others with weak state structures or limited resources failed to respond to the pressures and witnessed regime change. Due to the authorities' failure to stabilize the transition, the ensuing conflict cycle continues to plague their ability to govern. Subsequently, subnational identities emerge as contending centers of authority, further aggravating the problem of governance.

Today, although countries have experienced the Arab Spring in their unique ways, they all face problems of governance. Governing at a time of tectonic regional transformation is proving impossible at worst and very difficult and costly at best. Non-state actors now are in control of major chunks of territory and in some cases are claiming sovereign jurisdiction over cross-border areas. National authorities are hardly able to exert full control over the entirety of their countries.

Third, the region is beset with multiple interstate, societal, regime and human security problems. The conflicts have undermined the interstate security in the region. There has been major potential for regional spillover with the weakening of regional order and most importantly the lack of commitment from the international actors to quell violence. The rising tide of violence in Lebanon or Iraq is clear attestation of the contagious spillover.

The spread of arms or militants will continue to destabilize other regional countries. Both the initial Arab Spring spirit of democratic transformation and the subsequent risk-prone regional environment pose threats to the legitimacy and survival of several regimes in the region.

In this process, societal and human security has gone through degradation as well. The rising specter of violent extremism, which is intermingled with the politicization of subnational identities, has a devastating impact on many of the societies, undermining the multicultural fabric. Not only nonstate actors, but also the regime or government sources, have been the main perpetrators of violent extremism. The refugees and internally displaced people produce extreme misery, undermining human security. Likewise, the flow of refugees poses a risk to the societal security of the host nations.

Fourth, the weakness of regional or international conflict resolution mechanisms has deepened political problems. Regional actors failed to develop effective instruments to prevent, mitigate or stabilize either political disputes or military conflicts. The involvement of extra-regional actors has been far from constructive, reflecting either the poor condition of conflict resolution mechanisms or the clash of interests shaping international reactions. The declining commitment of the international community and the current policy of containment and relative disengagement deepen the vacuum of security governance.

The altered regional environment forces regional actors, including Turkey, to revisit their foreign policy in ways reflecting their interests and priorities.