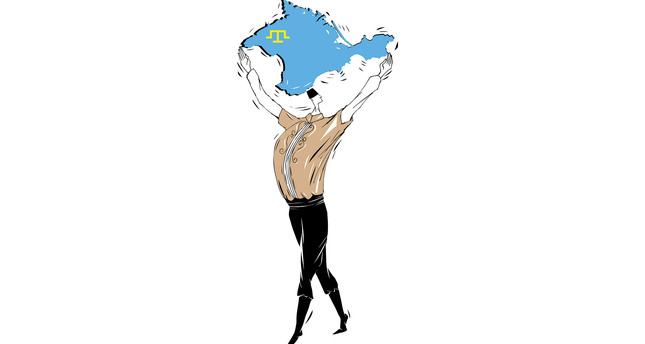 Accepting Russia's national interests in its region, the Turkish government did not officially condemn Russian actions in the Crimean Peninsula. Instead Erdoğan preferred to express his concerns for the Crimean Tartars to Putin during a telephone conversation

Turkey's position vis-a-vis the developments in Ukraine in general, and Crimea in particular, is subject to different and conflicting evaluations in various circles. Some commentators argue that Turkey adopted the Western approach of objecting to Putin's exertion of force over Ukraine to impose Moscow's will over Kiev. This view refers to statements made by certain Turkish officials after the Russian intervention in Crimea and political initiatives of Russian political actors in the peninsula as a reaction to the ousting of Victor Yanukovych.

After the Russian intervention in Crimea, Turkish Minister of Foreign Affairs Ahmet Davutoğlu stated on a number of occasions that Crimea is an integral part of Ukraine and the crisis must be resolved by accepting Ukrainian territorial integrity as a criterion. He also said, "It is of great importance for us that Crimean Tatars live in peace together with other groups in Crimea as equal citizens within the unity of Ukraine."

On the other hand, there are also those who say that Turkey has adopted a different approach to the Ukrainian crisis than that of the West. The commentators in this category emphasize two factors: Firstly, Turkey has not officially condemned the Russian move toward Crimea.

Secondly, Prime Minister Erdoğan, known for highlighting the suffering of Muslims in various parts of the world - particularly Myanmar, Palestine and Somalia - was not very outspoken about Crimean Tatars' anxiety while touring Turkish cities for his election campaign.

It is impossible to compress Turkey's attitude toward the Ukraine-Crimea crisis into these two approaches. This crisis is a complex one for Turkey, and the Turkish response is a reflection of this complexity.

By emphasizing Davutoğlu's statements, it is indeed utterly incorrect to conclude that Turkey's policy toward the Ukraine-Crimea crisis is pro-Western. There are two basic reasons compelling us to disagree with this view. Firstly, Turkey's approach to the crisis since the beginning of the uprising against Yanukovych in November 2013 cannot be reduced to the statements made by Davutoğlu. Secondly, Turkey did not perceive Putin's move toward Crimea as a sign that he'd lost hope for Ukraine and was attempting to secure the strategically valuable Crimea for Russia.

Preeminence of the ballot box

It would be a mistake to assume that Turkey viewed anti-Yanukovych demonstrations in Kiev independent of the anti-Morsi uprising in Cairo last summer. Turkish Prime Minister Recep Tayyip Erdoğan took a firm stand against the ousting of Mohamed Morsi from power, and he repeatedly and persistently stated that those who came with ballots should stand by them. He repeated the same theme many times within the context of the Gezi Park protests and Dec. 17 operation conducted by Gülenist infiltrators within the Turkish judiciary and security apparatus against the government. From this angle, the way Yanukovych was ousted, regardless of his mistakes, was not acceptable to the Turkish government.

As a reaction to Western silence vis-a-vis the coup in Egypt, Erdoğan heavily criticized the U.S. and EU, and accused them of not being sincere with their democratic commitments.

The alleged conversation between Assistant Secretary of State Victoria Nuland and the U.S. Ambassador to Ukraine, Geoffrey Pyatt - in which curse words were apparently directed at the EU - appeared on Youtube in February and is clear proof of American cooperation with elements of the Ukrainian opposition. It is unthinkable to assume that Turkish officials will ignore such a conversation when the Turkish government is facing similar challenges. For Ankara, the crisis in Ukraine and Crimea consists of more than Russian violation of Ukrainian sovereignty.

Not siding with Russia, but also not ignoring its vital regional interests

In addition to his emphasis on the territorial integrity of Ukraine, Foreign Minister Davutoğlu expressed that Turkey was not indifferent to Russia's interests in Ukraine. In addition to accepting Russia's national interests in its region, the Turkish government did not officially condemn Russian actions in the Crimean Peninsula.

After mentioning the Turkish government's concern for the Crimean Tatars, as expressed by Davutoğlu, we need to explain why Erdoğan has kept silent on this issue during his election campaign, seeing as he is known for raising concerns about Muslim minorities in his public addresses.

Due to the sensitivity of relations with Russia, Erdoğan preferred to express his concerns for the Crimean Tartars to Putin during a telephone conversation.

However, certain parts of that conversation should be underlined so as not to miss an important point. While stressing the Ukraine's territorial integrity and a solution within the parameters set by international law, Erdoğan said that finding a solution to the crisis was first and foremost the obligation of Ukrainians. Moreover, he also placed emphasis on the necessity of forming a common ground that would guarantee the peaceful co-existence of Tatars and Russians - constitutive components of Crimea - with Ukrainians.

Furthermore, we should add the fact that Turkey attaches importance to strategic relations with Russia. This is obviously a factor that should be taken into account when analyzing Turkey's approach to the overall issue.

It would be misleading to assume that Russian authorities missed the detail mentioned above regarding the Turkish attitude. As a matter of fact, some Russian media outlets highlighted the very same points discussed in this piece.

Survival of the Crimean Tatars as Ukrainian citizens

The strong emphasis on Ukrainian territorial integrity by Turkish government officials is important from several angles. First of all, this is a natural consequence of the necessity to find solutions to international problems within international law.

Besides, it is also related to Turkey being an important member of NATO. It should not be expected of Turkey to take a completely radical stance at odds with its Western allies on such an important regional crisis.

Nevertheless, there are more important factors than these two: Firstly, by claiming "the right to self-determination," the Russian majority's declaration of independence from Ukraine or unity with Russia is not a positive step for many countries, including Turkey. Turkey is not sympathetic to having the principle of self-determination used as a conflict resolution method in each ethnic conflict.

Secondly, for the Turkish government, its relations with Ukraine are independent of its relations with Russia. Turkey may have objections to the way Yanukovych lost power as an elected leader; however another government was installed in the country which did not come to power via a military coup.

Turkey-Ukraine relations are conducted and maintained within the framework of a strategic cooperation agreement and have recorded important progress in recent years. Besides, it is not rational for Turkey to oppose a government openly and directly supported by its allies in contrast to the silent position taken in Egypt.

In short, when we analyze Turkey's position vis-a-vis the crisis in Ukraine and Crimea, we have to take multiple factors into consideration and maintain a multi-faceted point of view. When looking at the crisis from Turkey, we see a multi-dimensional and multi-layered problem. Missing one important aspect may have severe consequences for Turkey.

For Putin, giving up Ukraine and only trying to secure Crimea is a last option after he consumes all his hopes and means. Russia intervened in Crimea because it did not want to risk its vital strategic interests there by being late.

Nevertheless, its main goal is to use Crimea as a bargaining chip against the West and Ukraine to impose a mutually acceptable solution.

At this stage, what Moscow asks is basically that Ukraine becomes a neutral state with an elected government and policy of federalism. As former national security adviser Zbigniew Brzezinski said: Without Ukraine, Russia can still be an empire, but a "predominantly Asian one, focused on the Caucasus and Central Asia." Therefore, Russia will not tolerate losing Ukraine entirely.