Celebrating the National Day of Pakistan 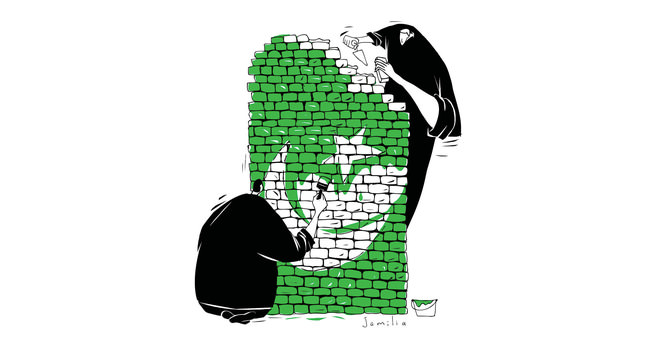 On the 74th anniversary of the Lahore Resolution, the Muhammad Nawaz Sharif government in Pakistan looks to face the country's political, economic and social challenges while strengthening its cooperation with Turkey

Each year, March 23 holds special significance for Pakistan and Pakistanis living all over the world.

It was on this day in 1940 that the Muslims of India decided to take their destiny into their own hands and pass a resolution at Minto Pak, Lahore to create a separate homeland for the Muslims of the subcontinent. It remains until today a symbol of the collective hopes and aspirations of the Muslims of India and a reminder of the immense sacrifices offered by the people for the realization of their freedom. It is, therefore, an auspicious day as it symbolizes the expression of the collective will of the Muslims of the subcontinent and is a reminder of their unity in search of their common destiny. The vision articulated in the Lahore Resolution in 1940 became a reality seven years later on August 14, 1947 in the shape of Pakistan, an independent Muslim state. Thus March 23 is celebrated as Pakistan's National Day every year.

Pakistan Day is an occasion to reiterate our commitment to the ideals by which Pakistan was created. It is also an occasion to pay tribute to the father of the nation, Quaid-i-Azam Mohammad Ali Jinnah, as well as to all those who struggled, suffered and sacrificed for the cause. Our ancestors' unparalleled democratic struggle aimed to provide the Muslims of South Asia a place where they could develop to their fullest spiritual, cultural, economic, social and political potential in a way that they thought best and in consonance with their own ideals and genius. Their ideals for creating Pakistan were democracy, constitutionalism and rule of law. The people and the political leadership of the new country had to face many challenges in the formative years. Yet the resilience and strong will of the people of Pakistan enabled us to face these challenges with courage and determination and helped transform Pakistan into a proud and sovereign member of the international community.

Located at the crossroads of strategically important regions of South Asia, Central Asia and Western Asia, Pakistan is now the country with the sixth largest population in the world. It is endowed with rich, fertile land and vast natural resources. It has attained food sufficiency and has become one of the world's leading producers of cotton, rice, wheat, sugarcane and milk. It has a strong manufacturing base centered on textile, automotive, cement, sports goods, leather items and food industries. With its rich cultural heritage, diverse landscapes, hardworking and hospitable people, Pakistan is a country looking upward and forward.

As a fast emerging economy and a growing consumer market, Pakistan offers diverse opportunities for foreign investors in the sectors of energy, telecommunications, infrastructure, agro-base industry, urban development and housing. With an abundance of skilled and cheap labor, well-developed transport and communication infrastructure and attractive government incentive packages, Pakistan is an ideal place for investment.

For the first time in Pakistan's history, a democratically elected government completed its full term and power was transferred to a newly elected government following the May 2013 general election. The government of Prime Minister Muhammad Nawaz Sharif is committed to the socio-economic development of the country. Policy measures have been undertaken to bring the fruits of democracy to the people of Pakistan in the form of good governance, a peaceful and tolerant society, and economic prosperity.

At the very outset of its term, the government charted out an action plan for the revival of the national economy. Challenges on the economic front are many and diverse, yet within a short span of eight months, Pakistan's economy is showing early signs of revival. In the first quarter of 2013-2014, national accounts point to a GDP growth rate of 5 percent, compared to 2.9 percent in the same period last year. Inflation pressures have started to ease, and as compared to November 2013 figures, prices in December 2013 and January 2014 have shown a downward trend. Exports are up by 3.2 percent in the first six months, compared to the same period last year. The rupee is also showing signs of stability, while the Karachi Stock Exchange has demonstrated an impressive performance in the last seven months. Today, Pakistan has all the ingredients of an open society where the cost of doing business is among the lowest in the region despite various challenges.

Pakistan and Turkey enjoy exemplary ties based on a common faith, culture, history and tradition. This historical bond predates the emergence of modern day Pakistan and Turkey. It is essentially a narrative of friendship and brotherhood between the peoples of the two countries spanning decades. Our bilateral relations are characterized by exceptional warmth, cordiality, mutual trust and understanding. A reservoir of goodwill flows from the one people to other. From the heights of the Himalayas to the plains of Anatolia our hearts beat in unison. The good relationship is also reflected in the fact that Turkey and Pakistan have convergent views on major issues of regional and global significance. Both countries have always extended full support to each other on several issues.

The government of Pakistan is keen to further develop these exemplary bilateral relations. Prime Minister Muhammad Nawaz Sharif chose Turkey to be one of the countries for his first overseas visit after assuming office. During his visit to Turkey in September 2013, he co-chaired the High Level Strategic Cooperation Council with Prime Minister Recep Tayyip Erdoğan. Prime Minister Erdoğan reciprocated with an official bilateral visit to Pakistan in December 2013 where he witnessed the overwhelming affection of the people of Pakistan for their Turkish brethren.

Pakistan and Turkey share a common vision to build a dynamic and strong partnership with trade, investment and economic cooperation as its defining elements.

In moves toward realizing this mutual goal, the leadership of both countries has made efforts to establish mechanisms that bring together businessmen and investors from the two countries on a common platform.

He invited Turkish entrepreneurs and businessmen to enter the Pakistani market in areas of growth such as energy, infrastructure development, municipal services and low-cost housing where the government is offering attractive incentives for foreign investors.

Several Turkish companies and businessmen have ventured into the Pakistani market in recent years and have benefitted from the special facilities and investment opportunities offered by the government to our Turkish friends and brothers.

In the present changing world, the two leading Muslim democracies of Pakistan and Turkey can serve as facilitators of stability and harmony in the region. As we commemorate the National Day of Pakistan, I wish to convey my profound gratitude to the people and government of Turkey for their continued support and I pray for a long-lasting friendship and brotherhood between our two peoples.

* Pakistan's Ambassador to Turkey and concurrently accredited to Macedonia and Kosovo