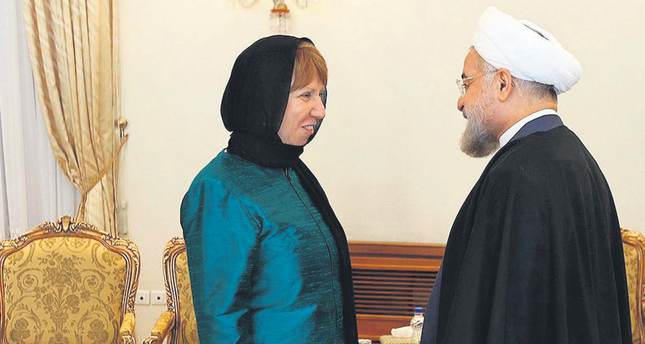 Washington challenges Tehran over Hezbollah while EU envoy plays the human rights card. Iran being brought in from the cold was never sincere, but it might at least help Catherine Ashton find a job

International diplomacy is a murky business full of double bluffs and skillfully crafted endgame tactics leaving the novice wondering, when two great sides talk after a separation, who is actually playing whom? Iran's Foreign Minister Mohammad Javad Zarif, a veteran of the international diplomacy circuit, is probably also asking himself the same question after a somewhat controversial visit recently by the EU's foreign policy chief, Catherine Ashton. Tony Blair's sycophant who rose to the dizzy heights of junior minister under the former U.K. prime minister has been the EU's foreign policy tsar since 2009 when, for the first time in its shaky, post-euro history, the executive in Brussels decided that the EU project needed to be bolder and have more gravitas on the international stage.

Ashton's appointment - a controversial one in it itself as many members of the European Parliament mocked her during her committee interviews in 2009 for having no experience at all- was supposed to usher in such a new era. She was expected to take the EU to a level beyond press releases and be more "hands on."

Yet five years later we are all asking ourselves what is France, the U.K., Germany and the U.S. playing at letting her do the "grip and grin" snapshots with arguably the most important man in the Middle East, in probably the most important county in the region, Iran? If all the world's leaders in the West can do is send someone of Ashton's mediocre diplomatic skills to step in and steer talks with Iran onto a platform of appeasement dialogue, then one has to ask the question: Is the West really serious about bringing Iran in from the cold?

And what is really going on in this new theater hastily erected by Obama? Who is playing who here in this Ipcress File final scene?

The reality is less complex once the smoke and mirrors are removed. Ashton and Iranian President Hassan Rouhani are in fact, both playing for international media and their own careers. Rouhani is under enormous pressure to deliver change. And to deliver it quickly as he and other regional leaders have noted from Egypt, the first rule of the Arab Spring is "If you promise change, deliver it within 12 months." Iranians want economic development now after years of paying the price for Ahmadinejad's firebrand chest-beating at the podium.

Ashton wants a job. As a little-reported fact about her is that her mandate is up in just a few weeks and she would love nothing more than to claim at least one victory in a five-year term on the international stage.

But don't hold your breath. What Obama is trying to do in the Middle East is reposition Iran's relations with the West to something more workable, an arduous task which no one is going to thank him for in history as with each inch he moves towards Iran, the elastic band between him and both Saudi Arabia and Israel get twisted even tighter. It would take a genius of diplomacy to stay straddled - and respected - in both camps while he maneuvers both axis towards a peaceful solution in Syria, particularly when this week he visits the Saudis to keep his eye on another best-kept secret in Beirut and Riyadh: recent reports indicated that the rebels are about to get a monumental delivery of heavy weaponry in the next few days. The word "game-changer" is going to haunt Obama.

One other keystroke of genius of Obama was to maneuver Ashton and her EU badge into the fold of Iran.

He positioned himself in exactly the place he wanted to be with Iran: safe and secure at just the right distance.

If Ashton achieves nothing in Iran, then he can tell Congress that her lack of dynamism was the cause. If she succeeds at anything at all, the Americans will swoop in and take it from there, much as they did after years of British peace brokering in the former Yugoslavia.

Washington loves nothing more than to blame the EU for dabbling in international politics when the best-kept secret on the circuit is that Ashton's role is more as a representative of the lowest common denominator of consensus among mainly EU weaker states and their vision of a federalist Europe. The big guns of Europe, France, Germany and the U.K. don't have the confidence in her to actually achieve much. They don't want her to. She is, bluntly, a representative of ideology, which no doubt gives her some common ground with Rouhani.

And this is why her recent trip to Tehran has got everyone talking. Was she there to spearhead negotiations over nuclear withdrawal or to herald a new debate on human rights? Or is the human rights issue a lastminute ploy designed to steer the Iranians into a diplomatic quandary which would guarantee scuppering the talks. Someone in Washington must have whispered to Obama, "You really want Iran on our side? Be careful what you wish for."

Could sending Ashton be a sure-fire way of thwarting the plan? Ashton's trip was the first high-level EU visit since 2008. Along with meeting Rouhani and Zarif, Ashton met with Iranian human rights activist Narges Mohammadi and Gohar Esghi, the mother of a blogger who was killed while in police custody in 2012. A picture of the meeting was photoshopped later by Iran's hardline media to simply erase the mother.

Why else throw in this spanner at this late stage, when there is so much at play? As any Brussels-based hack will tell you, human rights in the Middle East is of little concern to Brussels. Just consider the EU trade association agreement with Syria signed in 2007 where, despite mention of Syrian President Bashar al-Assad's human rights abuses catalogued, it didn't stop Brussels from signing it and bringing Syria "in from the cold." Similarly with Turkey, Ankara knows that human rights is not really a serious part of the foot-dragging that went on during the Gerhard Schroder and Jacques Chirac years of Turkey's EU accession.

So why human rights now from our Ashton? Michael Mann, spokesman for Ashton, said the meeting with Mohammadi and Esghi took place because of International Women's Day. Mann, who is known to be more than merely a spokesman for Ashton also has a reputation in Brussels for bending the truth to suit the EU line.

What perhaps he is reluctant to admit is that his boss has no chance whatsoever of securing any agreement on the nuclear issue but can score some very minor, token public relations points by raising the human rights issue. Points which are appreciated by the higher echelons of the EU who know that this year's European elections are expected to have the lowest turnout ever for mainstream parties and give huge swathes of power in the European Parliament to far right wing parties across Europe.

The EU has its own problems on its soil and doesn't take the polarization of the Middle East seriously. It doesn't take Iran's moves to improve relations seriously and it certainly doesn't take Ashton seriously as if it really wanted to solve the region's problems it would engage someone who can manage shuttle diplomacy.

But it's also about waiting for Congress in the U.S. to really show us whether Washington itself is serious about new relations with Iran. And Ashton and company know very well that news this week that Congress now wants to force Iran's hand to remove Hezbollah fighters from Syria is leaving many to ask whether Obama was ever serious in the first place about a new relationship. Is it perhaps that Americans are the ones who are buying time to delay an inevitable collapse in the talks? And the EU is complacent in the plan?

Ashton doesn't have even a contingent strand of any diplomatic flare or even the most basic skills at this craft of international relations. So why would the Iranians humor her? Because crucial to both sides disingenuous patina is to sustain Rouhani's public image as a moderate. Not everyone in Brussels, though, toes the line.

Struan Stevenson, who heads up the prestigious Iran-European Parliament delegation and is a member of the European Parliament, is a Scot who doesn't mince his words. "Rouhani is by no means a moderate though," he says. "He is cheating the West and buying time to complete Iran's building of a nuclear weapon."

In the press room in Brussels, many hacks believe Ashton is also thinking of her own career and tell me that she wants a job now in women's rights with the U.N. and this latest stunt might help her with that. But what does Iran get from helping her and the EU project gain prestige on the international circuit? Neither side actually wants the deal to happen.