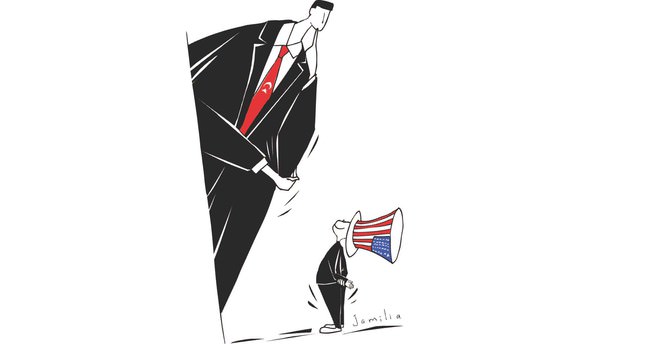 The Obama Administration's Middle East policies have been more coherent than they appear. The U.S. has no business intervening in countries in which it has no business.

Ranking America's presidents is one of my country's favorite pastimes, spurring both endless commentaries and sometimes revealing debates. This is more than an academic exercise: Conservatives, for example, rank Ronald Reagan among our great presidents, which irritates the sensibilities of liberals. So too, conservatives scoff at the notion that Democrat Woodrow Wilson was anything other than a fuzzy headed internationalist who ended his life by relying on his wife to do the governing.

Despite this, there is broad agreement among Americans on the country's worst presidents, a list that includes James Buchanon (the cipher who preceded Lincoln), Warren G.

Harding (the poker playing near criminal), Richard Nixon (the criminal who sometimes played poker) and Calvin Coolidge, who served a single four-year term after succeeding Harding. "Silent Cal," as he was called, is still adjudged a non-entity, despite his celebrated probity. When told that Coolidge had died, Dorothy Parker - the satirist and poet - issued the perfect descriptive: "How can they tell?" she asked.
Yet even some of our worst presidents, Coolidge among them, understood and connected with the country.

In January 1925, in the midst of "the Roaring Twenties," the normally reticent Coolidge told a group of newspaper editors that "the business of America is business." It wasn't the first time that one of our leaders had made this claim, but the Coolidge comment stuck, taking on the status of a principle that Jefferson once called "self-evident." In truth, "the business of America is business" is not only a foundational, if oft-forgotten, first principle of our Republic, it's the E=mc2 of American foreign policy. It explains everything.

Nowhere has the centrality of American business interests been more evident than in Syria and Egypt - nations in the throes of revolutionary changes wrought by the Arab Spring. In both countries, the U.S. has followed policies that it hopes will dampen instability at the same time that it attempts to remain an advocate for free, fair and open societies.

In the immediate aftermath of the Syrian uprising in March of 2011, the U.S. attempted to stigmatize Bashar Assad, believing that it was only a matter of time before the resistance forces arrayed against him triumphed. But the longer Assad held on, the more the U.S. argued for the Syrian opposition to negotiate with him. The result was a policy making hash or, as one of Washington's small group of Syria experts pointedly commented: "It looks as if we want Assad to lose, so long as his opposition doesn't win."

The same incoherence stalked the U.S. in the wake of the June 30 coup in Egypt. In the aftermath of the coup, the Obama Administration struggled to find a proper response to the overthrow of the Mohamed Morsi government, engaging General Abdel-Fattah el-Sisi in a series of telephone conversations aimed at reassuring him of American support.

At the same time, American policymakers pushed Sisi to shape a transition that would return the country to democracy. The messages were, in fact, contradictory:

The U.S. wanted to maintain its support for Egyptian democracy, while hoping no one would notice it was cozying up to its greatest enemy.
The incoherence of American policy on Syria and Egypt has provided fertile ground for White House critics, who condemn the president for caving in to ruthless dictators (Assad), while snuggling up to selfproclaimed messiahs (Sisi). But it's useful to note that while Obama's critics remain outspoken in their condemnation of White House views, none of them have offered an appealing policy alternative to what Obama is doing just now - which is nothing: The U.S. military has no appetite for adopting Republican Senator John McCain's prescription that it intervene militarily against Assad and Members of Congress have been noticeably silent when it comes to telling Obama what leverage he can use to shape a return to democracy in Egypt.

Which is why, most recently, the Obama Administration has been following policies shorn of American ideals, while strengthening those that are pragmatic, feasible - and help the American economy. It's possible to gauge these policies not by noting what Barack Obama says, but by following where he goes. When Obama announced that the U.S. would "pivot to Asia" back in 2009, it was not simply because America has a long, if uneven, history with the region. It's that China, Japan and South Korea could one day, and quite soon, outstrip American trade with Europe.

So too, such pragmatism was on display during Obama's trip to Saudi Arabia. While the U.S. has maintained a deep and strong relationship with the Saudi royal family since 1945, when Franklin Roosevelt chatted with Ibn Saud, the focus of this seventy-year partnership has been on trade. That's not a secret: Saudi Arabia is America's 10th largest trading partner, just behind Great Britain, France and Brazil. And Egypt?

Of course, America's most strident critics point out that the U.S.-Saudi partnership is based less on principle than on necessity. We depend on Saudi oil while they depend on American weapons. But so what? That America defines its national interest in economic terms is not only old news, it's absolutely defensible - particularly in a world where economic growth underpins political stability. Then too, the critics have it wrong. The U.S. isn't dependent on Saudi oil, but on Canadian oil, while fully one-quarter of Saudi imports are American agricultural products. Talking about the centrality of foreign trade to American policies is hardly mother's milk for many Washington wonks, but maybe it ought to be. Even a cursory study of American economic interests helps to explain why, most recently, the Obama Administration has strengthened its relationship with Turkey (our 10th largest agricultural export market and with whom we maintain a trade surplus) and pursued an opening to Iran - whose economic growth, were it to be loosed, would likely dwarf that of any of its neighbors.

Which is only to claim that the Obama Administration's Middle East policies have been more coherent than they appear - and more practical than the administration's critics would claim. In truth, the White House has been diligently maintaining the practical foreign policy application of Calvin Coolidge's principle: The U.S. has no business intervening in countries in which it has no business.

"There isn't anything that we get from either Syria or Egypt that we absolutely need," an administration official told me last week, then added: "I know that sounds cold, but it's the truth - and when it comes to foreign policy, these kinds of calculations matter."