The AK Party and CHP reflected in the 2014 Elections 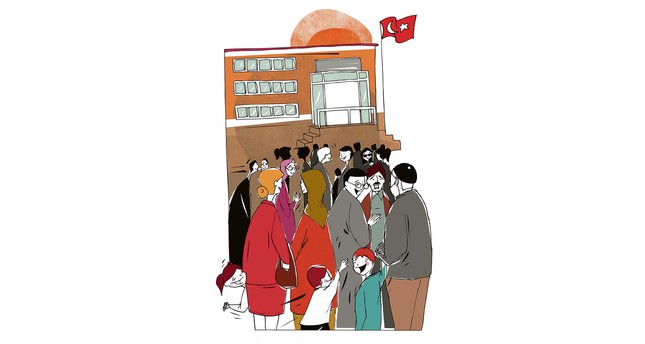 During the CHP election campaign, Kılıçdaroğlu continually stated why the people should not vote for Erdoğan, yet he failed to give the electorate any reason to vote for him instead

The elections were received with great surprise in Diyarbakır. Ok, so we say that "March comes in like a lion and goes out like a lamb," but snowfall in the city at the end of the month proved a bit much. The weather was unlike any seen for most of the winter months. Sharp winds, heavy rains and occasional snowstorms so intense it was impossible to keep one's eyes open.

This probably constitutes professional misinformation, for when I saw the snow quietly falling, voter turn-out was the first thing to spring to my mind. I grew somewhat anxious.

Would the bad weather deter people from voting?

Wouldn't the voting public prefer to stay in the warmth of their houses?

I left home, got to my polling station and, to my delight, my fears proved groundless. It was still early in the day but one of the ballot box officials informed me that over half of voters registered there had already cast their vote at the very ballot box I had cast mine. Regardless of the snow, rain and cold, citizens had swarmed the polling stations from the early hours onward:

Young and old, men and women, healthy and disabled, women with headscarves and women without, poor and rich all came to vote.

The school where I cast my vote was a celebration of democracy. The schoolyard was filled with people from across the social spectrum.

No one was disturbed by the presence of the other. With patience and politeness everyone waited for their turn to vote and fulfil their duty as citizens.

There were colorful scenes: young children looking about wide-eyed, and somewhat older children trying to understand their parents' party preference. It was like an applied civics lesson. Some were assisting their elderly or infirm relatives. It was evident that no one wanted to be excluded from this process and people were going to very effort to ensure that others, like the elderly, were accommodated in the voting process.

I cast my vote, returned home and turned on a news channel to see what was happening.

Similar scenes were taking place all over the country. Electoral turnout was high. The reason for this is simple: People wanted to expressed their will and determine their own fates.

It is best not to pay any heed to the writers that belittle the public. Reality shows that we are headed in the opposite direction than what they claim. The truth of the matter is that Turkey now has a politicized public. The general public closely follows political developments, is knowledgeable about political actors, discusses issues that directly affect their daily lives and evaluates the behavior of politicians. The public is making use of political mechanisms to set the agenda and express its will.

There are some consequences to a public that lives and breathes politics. Firstly, political parties cannot rely on populist rhetoric anymore.

Many candidates for the March 30 elections made promises of supplying free water or public transport. However, voters were not charmed by such claims because they questioned how such services would be provided and they got the answers they expected. Politicians have to now change their game plan, as cosmetic promises no longer woo the public.

There are two key factors that impact a Turk's political choice: identity and service. While some voters base their political choices solely on identity, some base it on services provided.

Some consider both of these factors in varying proportions. Political success is dependent on meeting the expectations of the voters in terms of identity and providing services that improve quality of life. When a political party is able to deliver both, the competition is left behind.

In this context, the experience of the AK Party is particularly significant.

In 12 years of rule, the AK Party has achieved its desired results in three general elections (2002, 2007 and 2011), three local elections (2004, 2009 and 2014) and two referendums. The reason for the AK Party's success in becoming the dominant party in Turkish politics is the combination of correctly pitching identity issues alongside the provision of services that have improved quality of life for citizens.

Improvements in areas such as health, education, transport and housing, in particular, have had a direct impact in attracting voters to the AK Party.

Lastly, politics only has meaning when it is part of the average citizen's daily reality.

Therefore, it is crucial for political parties to observe and listen to the public, take ownership of issues and know what is expected of them.
The opportunities provided by technology in this day and age must be carefully considered.

Like everyone else, political actors and parties must make every effort to use social media effectively.

However, as Etyen Mahçupyan correctly observed: "society is not social media." If a political party believes it controls the public virtual sphere, it will condemn itself to failure.

When considered through this prism, the 2014 elections and the difference between the AK Party and the Republican People's Party (CHP) reveals that the AK Party did not resort to populism. It emphasized its achievements and what still needs to be done. The prime minister delivered speeches to this effect in all of his election rallies. For every city visited, Erdoğan outlined the party's past work, and services planned for the future. Therefore, a positive message of continued service to the electorate was delivered.

Importantly, especially after the Dec. 17 operations, the prime minister adopted language that intertwined his fate with the fate of his electoral supporters. The aim was never portrayed in terms of personal victory or loss but rather the conservative pious segment of society that the prime minister has championed would be at risk if he lost at the ballot box. Erdoğan delivered this message with magnificent dedication, travelling to all corners of the country and only stopping until he lost his voice. He moved and convinced people.

The CHP, on the other hand, made three key mistakes: Firstly, instead of positive political rhetoric, it employed negative political language.

Kılıçdaroğlu continually spoke on the matter of why one should not vote for Erdoğan, yet failed to give the electorate a reason to vote for him instead. At every opportunity Kılıçdaroğlu spoke of how "bad" Erdoğan and the AK Party were, but did not give any indication as to why he and the CHP were "good."

CHP's campaign built on negativity did not convince voters that it would be more effective than the AK Party at governing the country.

Secondly, the CHP behaved as though it was a regional party. When campaigning in the east and southeast in the 2011 general elections, Kılıçdaroğlu said: "We will always stand by you, we will always be here, and we are going to rebuild the brunt bridges between us."

Kılıçdaroğlu did not express such sentiments during this election campaign, but instead completely ignored the east and southeast. In a critical center like Diyarbakır he did not even hold a rally; the CHP did not mobilize for any campaigning and turned into nothing by a billboard party.

The contrasting political approaches between the government and the opposition have naturally produced different results. While the AK Party celebrates yet another electoral success, the CHP once again stands defeated. The CHP should draw an important lesson from this election: For as long as the CHP avoids being inclusive and focused on solving basic problems, it is impossible for it to be a viable alternative to the AK Party. Unfortunately, it seems the CHP leadership is not drawing these conclusions from the election results.