MIKTA as a force for good 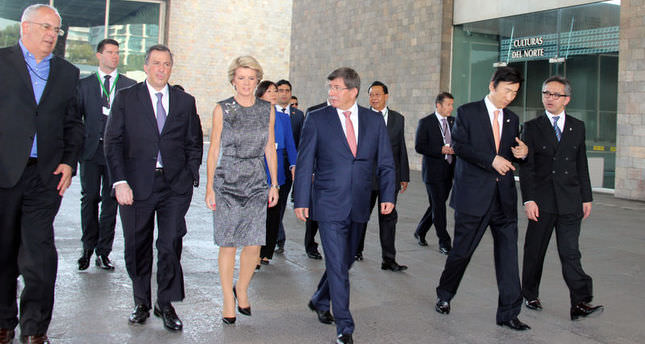 by daily sabah
Apr 25, 2014 12:00 am
A significant meeting took place on April 13 and 14 in Mexico City.We came together for the second meeting of the ministers of foreign affairs of MIKTA countries - Mexico, Indonesia, Korea, Turkey and Australia. This new platform, created at an inaugural meeting held last September in New York on the margins of the high-level week of the U.N. General Assembly, has real potential to act as a force for good in global affairs. The global dispersal of power, the ascendance of regionalism and the growing presence of non-state actors are some of the salient features of the evolving international scene. In a rapidly changing world where power, authority and wealth are diffusing from traditional centers to a wider sphere, we are seeing increased shared benefits but also more responsibility.

Emerging regional actors are gaining new prominence.Global peace and stability increasingly lie in the harnessing of regional interests and arrangements with global ones. This task is not as easily done as said. In order to build these ties, we need political recognition of the common need to come together for cooperation and coordination on the basis of functional needs. Above all, this involves contributing to the effective functioning of the multilateral order and addressing shortcomings of global governance.

In this context, it is no surprise that a new tendency in global governance is to find spaces for regional dialogue on relevant issues. MIKTA has come into being against this functional backdrop.What brings MIKTA countries together is the functional need to cooperate, coordinate and work constructively with each other and other states in the face of global and regional challenges concerning us all. It is also not surprising that the very thought that gave birth to MIKTA emerged thanks to our joint deliberations in the G-20. Representing 85 percent of the global economy, 80 percent of world trade and two-thirds of the world population, the G-20 contributed to strengthening the role and participation of emerging market economies in global governance.Major emerging market economies started to take more responsibility in line with their growing weight in the global economy and their increasingly prominent role in global politics.

We launched MIKTA as an informal platform of countries which are like-minded on many issues.MIKTA is comprised of important regional actors whose active contribution is essential for devising solutions to regional problems. Additionally, we are engaged in meaningful bilateral relations with each other. This makes MIKTA well-placed to contribute to global governance reform and G-20 work, as well as to facilitate solutions to global challenges. Our countries can help make the G-20 more effective in reaching consensus and attaining concrete results.The best way to achieve this is if all members are engaged equally and the G-20 acts coherently as a group.

The five countries participating in the MIKTA platform are a diverse group. Yet, we share core values and face similar challenges. We are open economies enjoying democratic pluralistic systems. We are strategically located and strongly linked to our surrounding regions in all aspects. We all have dynamic economies with robust growth rates. We are likeminded on many of the principal challenges of the day and are active contributors in the main global fora. We all see "regional ownership" as key. These attributes provide a sound basis for our cooperation.

MIKTA is based on a common interest in strengthening multilateralism, supporting global efforts for stability and prosperity, facilitating pragmatic and creative solutions to regional and global challenges and implementing the needed reforms in global governance structures. Our exchanges will be informal, flexible and issue-driven under MIKTA.Consultations intend to focus on issues on which we can provide added value. Furthermore, we have agreed to foster the institutional framework governing our relations in the political, economic and other cooperation fields.