Crimea: A gateway to understanding the Ukrainian conundrum 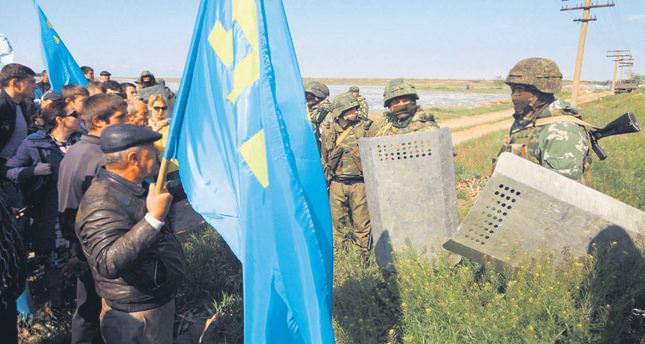 Any challenge between Russia and the West from now on will produce a zero sum game and each time the bill will be paid by a weakened Ukraine, which is neither geopolitically important for Russia nor economically attractive for the EU in years to come

A well-known slogan says that history repeats itself. In particular, this slogan now a day is very valid in the geographical pivot of history, namely the Eurasian heartland. As the major determinant power of Eurasia since the post-war period, Russia once again annexed the Crimean and/or Tauric Peninsula, this time from Ukraine via a fait accompli referendum in March. For many, Russia's recent irredentist move is reminiscent of 1783 when the Crimean Khanate was seized by Tsarist forces from the Ottoman Empire. Since then, Crimea has become the focal point of perpetual war in the Russia vs. the West geopolitical impasse. The Crimean War in the mid-19th century somehow prevented Russian expansionism and saved "the Concert of Europe" up until World War I. The Nazi invasion of Crimea, however, culminated with the Tatar deportation to Siberia and Uzbekistan that augmented discontent and hostility among the Turkic communities of Soviet space against Moscow. Relatively, the Crimean Peninsula had reached a peaceful atmosphere when it united with Ukraine as an autonomous republic in the fin de siècle post-Soviet era.

Within the context of the aforementioned la longue durée historicity, one might easily comprehend that the recent crisis in Crimea was not an improbable development. Rather, it has been expected since Ukraine moved toward the Western sphere of influence in the last decade. The Western-backed Orange Revolution in 2004 triggered anti-Russian sentiments all around the country and changed the nature of
Ukrainian polity.

Since then, all these developments have been perceived as a challenge in its near abroad and unacceptable by Russian leadership. For Russia, and particularly for President Vladimir Putin's neo-Eurasianist circle, the rupture of Ukraine from the Slavonic-Orthodox geopolitical orbit means that Russia's return to the pre-imperial status quo during which the Principalities of Muscovy and Kievan Rus had been struggling with each other over the territorial dominance of Eurasia. At the end, Muscovy rose to power by surmounting Kiev together with surpassing the Golden Horde Tatars. That is to say, Russia's heydays started when she conquered Kiev, and Russia would seemingly be isolated on the edge of Europe when she completely lost Ukraine to the West.

Therefore, it might be said that the intellectual minds of Russian policy-makers are well-aware of this historical realpolitik and preferred to debilitate Ukraine through annexation of Crimea lately and most possibly densely ethnic Russian populated and raw material-rich areas of Eastern Ukraine very soon (consisting of the Donbas regional cities of Donetsk, Slavyansk, Mariupol and Luhansk and the east of Dnipropetrovsk to Kharkov).

In other words, Russia benefited very well from the chaotic conjuncture of Ukrainian internal affairs by pursuing a pre-emptive strategy vis-à-vis the West. In the current situation, a divided and debilitated Ukraine can now be dismissed by Russia. Because Ukraine will never reach its historical position again in terms of political and economic strength and continue to serve as a cordon sanitaire or a buffer zone between Russia and the West from now-on. Moreover, integration of Western Ukraine alone into the EU seems an additional onus at least for Europeans, especially in the midst of a devastating Eurozone crisis.

At this stage, Russia regained its historical naval gateway to the warm waters of the South without entering into a hot conflict on the one hand. On the other, it will not have to get leasing permission for the Black Sea fleet, which has constituted one of the main sources of political tension and animosity in Ukrainian nationalist public debates against Russia since independence.

As is well known, the leasing duration of Black Sea fleet deployment in Sevastopol had been prolonged for 25 years beyond 2017 by deposed President Viktor Yanukovych.

Thus, Russia got rid of an economic and political burden that has been the most important Ukrainian leverage in energy bargaining negotiations between the two countries recently. In addition, Russia obtained another opportunity to by-pass Ukraine in energy transportation politics, which has existed between the two for years. Hence, Russia's prospective pipe-line projects like South Stream would not need the Ukrainian exclusive economic zone in the Black Sea in order to carry Russian energy resources en route to Europe. In short, Russia is ostensibly the most lucrative party in the latest developments in Crimea in particular and Ukraine in general. As should be remembered, Russia had unwillingly left Crimea to Ukraine upon returning the Soviet nuclear arsenal within the framework of the 1994 Budapest Memorandum.

However, the secession of Crimea also tells us a lot about Ukraine. Undoubtedly, the loss of Crimea brought to the surface some institutional and structural problems of post-Soviet transitional politics in Ukraine. First and foremost, the Crimean issue has proven that Ukraine could not have succeeded in becoming a proper nationstate due to the lack of adherence to communist ideology.

So to speak, Ukrainian authorities could not have recruited a robust Ukrainian nationhood that binds together the two sides of the Dnieper River in terms of cultural identity and social mentality. In this regard, Crimea might be a litmus test for Ukraine because the three major ethnic groups of the country, Ukrainians, Russians and Tatars were living side by side in the peninsula. But, the Russian ethnic majority (almost 60 percent) of Crimea chose to join Russia in the March plebiscite. This phenomenon should also be revealed in the forthcoming referendums to come in the Eastern provinces.

Comparatively, Russia has also had the same kind of inter-ethnic identity problems in the post-Soviet era, especially with Muslim and Turkic communities, such as Chechens, Circassians, Tatars, etc., but Russianness became a cultural identity thanks to the Russian language in the course of time, even if a well-known Russian proverb says, "If you scratch any Russian, you find a Tatar." Unfortunately, Ukrainian politicians could not have created such harmony among Tatars and Russians together with Ukrainians. And worse, they neglected Crimea in its backward infrastructure -- a peninsula that was only remembered during summer tourism season by wealthy Ukrainian oligarchs who have a villa in the Crimean Riviera -- Yalta. Nevertheless, someone may mention the filled part of the glass, and it might be said that the recent nationalist upheavals would be able to accelerate the mobilization of a new Ukrainian identity by the otherization of Russia and Russianness in the medium term.

Another lesson that the Crimean issue has taught Ukraine has been the unbearable slightness of the taking for granted nature of relations with the West. Needless to say, Ukrainian public and, particularly, opposition parties have excessively relied on Western moral support since the Orange Revolution. The then Yushchenko-Tymoshenko pragmatic alliance had succeeded in overthrowing the Yanukovych government through a popular vote, but Yanukovych and his pro-Russian ex-nomenklatura bureaucratic circle gradually restored their power in state and society relations. Unfortunately, the EU's assistance to Ukraine could not go beyond the Eastern Partnership for Peace Program's Neighborhood Policy, while Ukraine, as a post-communist transitional country, needed more external underpinnings for its institutional change towards the West. It could be the acquis communautaire of the EU conditionality of the full membership perspective. But the EU and NATO as well have just considered Ukraine's geopolitical importance in terms of security means in order to contain Russia on the remote borders of Europe. Furthermore, European politicians unnecessarily intervened in Ukrainian domestic affairs against Russian interests by undermining the country's centuries-old formal and informal Russian reserves. For instance, the West was too interested in some symbolic domestic issues like the Yulia Tymoshenko trial instead of Ukraine's problems of post-communist transformation, such as wide spread corruption, bribery, human trafficking, nepotism and an oligarch-dominated economy. In return, all of this Western involvement has exceedingly irritated Russia, and each time Ukraine paid the price for Russia's anger when the big boss cut the gas flow off twice in the winters of 2007 and 2009.

Finally, Ukraine has recently crumbled in the middle of the great power politics of Russia and the West. The Crimean issue constitutes the historical backbone of that rivalry. For now, Russia seems to have achieved its goals in and around Ukraine and the Black Sea basin, despite the Ukrainian Euromaidan protesters overthrowing the pro-Russian government during the so-called February Revolution. Indeed, the only concrete thing that the Ukrainian protesters have succeeded in is the division of their-own country between the two sides of the Dnieper River and the de facto annexation of the Crimean Peninsula to the Russian Federation. The West, however, could not have passed test during the Ukrainian crisis and seems is has not taken its lesson properly from the 2008 Georgian war at a time when Russia separated South Ossetia from Georgia. This time, Western policy circles abandoned the appeasement policy and put some tiny sanctions over the Russian leadership, but Russia's conventional energy leverage still stands in the hands of Putin as a stick over Europe. Nonetheless, any challenge between Russia and the West from now on will produce zero sum games, and each time the bill will be paid by a weakened Ukraine, which is neither geopolitically important for Russia nor economically attractive for the
EU in the years to come.