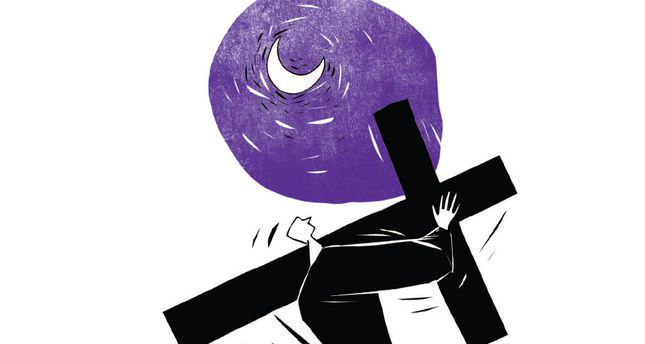 The European Parliament criticized Turkey for its lack of laicism; on the other hand, all of Europe celebrated the 400th birthday of Pope Innocent XI in March 2012 who encouraged European kings to establish 'holy alliances' against the Ottomans

A European lord said in the 18th century: "The plains of North America are our corn fields; Chicago and Odessa our granaries; Canada and the Baltic our timber forests; Australia contains our sheep farms, and in Argentina and on the Western prairies of North America are our herds of oxen; Peru sends its silver, and the gold of South America flows to London; the Hindus grow tea for us, and our coffee, sugar and spice plantations are all in the Indies ... and the Mediterranean our fruit garden and cotton grounds." (1) German President Joachim Gauck visited Turkey.

He tried to give Turkey a lesson in human rights, but what is ironic here is that Germany is very harsh and reckless on this issue. During the elections in Germany last year, banners calling for a ban on minarets could be seen everywhere. The rightist Republican Party based its whole election campaign on hatred against minorities and on xenophobia. The National Socialist Underground (NSU) committed murders, killing nine immigrants, which could never happen in Turkey in 2012! The German media tried to cover up the murders with a simple expression: neo-Nazis. In the High Court in Munich, it was found that the German intelligence service had ties to it. The case is being prolonged and probably will yield no result. So President Gauck is not someone who can comfortably talk about human rights and secularism.

The anti-Islamic tendency of Europe will never vanish because European identity was historically based on anti-Islamism. Recently, the European Parliament criticized Turkey for its lack of "laicism."

The EU's ceremonies for candidate countries are all held in a gigantic hall that has a statue of Pope Innocent XI in Rome. This must be a sincere sign of EU's laicism, which criticizes Turkey on laicism. When the Turks besieged Vienna in 1683, European countries united against the "Ottoman Threat," as a result of Pope Innocent's skillful diplomacy. The Pope was aiming to include Iran's Shah in the "Holy Alliance" against the Ottomans. The Archbishop of Nakhchivan was told to establish contact between the Pope and the Shah. Another part of the Pope's plan was to propagate Christianity in Ethiopia and Egypt to create chaos in Ottoman territories. Therefore, Iran in the East and Ethiopia and Egypt in the Nile Valley would keep the Ottomans busy, while they were fighting outside the walls of Vienna.

The last alliance of Europe was based on such a heinous plan. This alliance yielded results between 1683 and 1699, and the Ottomans would not threaten Vienna again. Europe was not able to stop the Ottomans before Innocent XI. At that time, Islamic civilization was in charge from India to Hungary. As Süleyman the Magnificent was entering Hungary in 1526, Babur was entering India. According to Halil İnalcık, when Süleyman the Magnificent chased Charles V, who is considered to be the last glorious emperor of the Holy Roman Empire, through Munich and freed Francis I of France, who had been imprisoned by Charles V, the Ottomans, had a GDP (9.5 billion gold coins) as big as the total sum of the GDPs of the three biggest economies after the Ottoman Empire.

A European ambassador to Istanbul describes the power balance between the Ottoman and the European like this: "On their side is the vast wealth of their empire, unimpaired sources, experience and practice in arms, a veteran soldiery, and uninterrupted series of victories...
On ours are found an empty treasury, luxurious habits, exhausted resources, broken spirits."(2) Europe was finally able to unite against the Ottomans for the first time under the lead of Pope Innocent XI. The only target was to dethrone and drive "the other" great power out of Europe. The retreat of the Turks started with the "War of the Holy League" and continued for three centuries until the Battle of Sakarya in 1922, and during this period, the paradigm of the West was built on this hatred and ambition. The identity of Europe is based on Christianity's struggle against the Ottomans. For the European mindset, Pope Innocent XI meant "a Europe" that is a global power. That is why today there is a statue of Pope XI Innocent, not the Holy Roman Emperor or the Sun King, in that EU Assembly Hall.

Sweden's ambassador to Ankara in the 1990s, Erik Cornell, who is also a historian tells the truth in his book "Turkey in the 21st Century: Opportunities, Challenges, Threats." Cornell says: "The European sense of identity completely developed in the period of struggle against the Islamic Ottomans' expansion in Europe. Therefore, the Christian attitude against Islam is the same as Europe's attitude against the Turks, which is cold and irremediable." What the Swedish ambassador wrote in the 2000s seems to have been written by Voltaire with the very same ink in the 1700s or as Pope Innocent XI used in his letters to the Holy Roman Emperor Leopold I in 1600s: a very old hatred.
The symbol of the Enlightenment, Voltaire, says in a letter to Catherine II of Russia "Turks were along with the plague, the greatest curse on Earth, it does not suffice to humiliate them, they should be destroyed.

Overcome the Turks and I will die content. I wish I had been able to help you to kill a few Turks." In his diaries, he says to the European nobles: "Chase out these barbarian Turks from Europe, you fools!" ("Voltaire: Political Writings" by David Williams).

Is this the Enlightenment?

Actually, political disagreements in Europe were the result of its natüre. Before anything else, "the self-concept of Europe" has never allowed such an atmosphere. Moreover, both geographic and geopolitical lines and differences in race, sects and languages in Europe, made it impossible for a "united Europe" to be politically recognized by the whole world. The impossibility of unity is maybe the boldest line that separates America from its European ancestors, and therefore, Europe did not have the tolerance that the US somewhat has. Its historical sub-consciousness always kept Europe from being a place where different groups could openly and freely discuss different ideas. Europe could never reach that maturity.

First geographical explorations, colonialism and mercantilism and afterwards the industrial revolution were forged in the same furnace of the Renaissance in Europe. But "the self-concept of Europe," as Ambassador Cornell says, was born in the struggle between the Ottomans and the Europeans. The self-concept of Europe was born in such a climate it always stayed stuck with the perspective of "myself and the other." Yet, Europe could never internalize that "myself." That's why it waged two bloody world wars, which cost over 70 million lives. "Europe's Collective Soul" had to define the "other" as an enemy in all circumstances and justified the legitimacy of its acts on this basic line.

That has always been the problem. Europe has always created "the other" to form legitimacy for its colonialism. The meaning of this legitimacy in practice was colonization of 83 percent of all world lands by 1913. "Myself and the other" actually meant "the other" was there for "myself." For Europe, which was poor by natural and social resources, the only way to satisfy itself was to take from the "other."

According to the "self-concept of Europe," "the others" -- all those that were outside of Europe -- were definitely enemies and should be exploited. Colonialism was born as a result of this ambition and quest. In "The Empire," Niall Ferguson describes how the natural and material resources of Africa, especially the diamond and gold that Europeans appropriated, amounted to $777 trillion, while European lords earned 150 trillion pounds from the slave trade. (3) A Spanish visitor to Potosi said in 1638, "Every peso coin minted in Potosi has cost the life of 10 Indians." (4) But in the end, history schematized the system behind Europe's prosperity, as Europe had been the bloodiest continent that also shed the most blood far beyond its lands; the very same continent was maybe the poorest in the world in regard to natural resources, yet it had been the most prosperous one.

In the Durban Declaration of 2001, Europe defined its own history: "Colonialism has led to racism, racial discrimination, xenophobia and related intolerance, and Africans and Asian indigenous peoples were victims of colonialism and continue to be victims of its consequences. We further regret that the effects and persistence of these structures and practices have been the factors contributing to social and economic inequalities in many parts of the world today." (5) That is what Europe did to write its glorious history. The foundation of modern science was built on the war industry used to control the colonies for a very long time. Crowds in colonized lands would get scared when they saw weapons they had never seen before. Ships evolved into steamboats, and modern firearms evolved into weapons for colonialism to be sustainable. Africa's disordered and poor tribes for the first time faced regular armies with artillery. The Portuguese king, who came ashore with 360 artilleries, massacred 4,500 Moroccans, while he lost just four soldiers until the Ottomans came to the aid of Moroccans in 1578. The army of Lord Kitchener killed 12,000 dervishes, while losing only 48 soldiers in North Sudan in just a day with Lee-Enfield rifles that terrified everyone who saw them.

Obviously the German president read too much Voltaire!

3 - Niall Ferguson, "Empire -The Rise and Demise of the British World Order and The Lessons for Global Power," Introduction p. IX