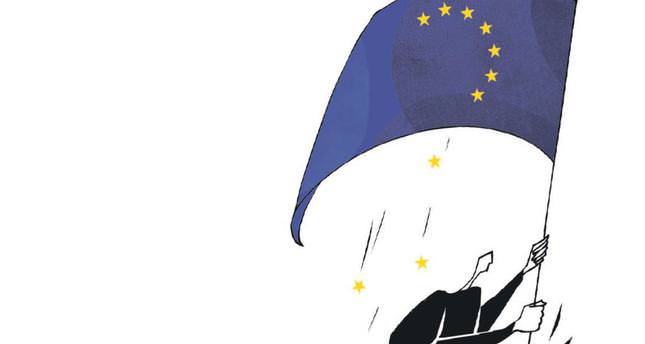 by Martin Jay May 28, 2014 12:00 am
Bernard Baruch, the U.S. statesman once said, "Vote for the man who promises least. He will be the least disappointing." Never could a truer word been applied to the European elections last week, which France's far-right leader Marine le Penn described as an "earthquake."

Something extraordinary happened and now Europe's elite in Brussels have to brush aside the normal delusional views of their own importance and accept that the entire project is in jeopardy. Euro pundits in Brussels might scoff that for the first time ever the European parliament has a useful purpose other than just merely being some PR exercise to legitimize the European Commission's otherwise non-democratic yet hugely important role. Yet Europe going to the polls via the European parliament vote was not only about sending a message to the Masonic elite which runs Brussels, it also sent a clearer message to governments back home in their own countries that people are tired of third-class governance. Things are so bad in Europe that "Do It Yourself" governance is the third way. Certainly in Britain and France, and to some extent in Denmark, the Netherlands and Finland, the mainstream political parties are simply out of touch with what the electorate has become - post 2008 world financial crisis and demise of the euro - and what it now requires. It's not just about Eurozone countries, like Cyprus, Ireland, Spain or Portugal, who cannot adjust their own monetary policies to accommodate shifts in global economics and market conditions. It's more than that. It's about the EU on the one hand overregulating Europe with truckloads of legislation making European companies increasingly uncompetitive coupled with a shift in ground from Brussels to form itself into a super power. It's as though Brussels is a machine which is out of control. No one is shouting "stop" when it smashes its way through what everyone has fought hard to build as, blinded by its own dogma, it just continues to build more and more super power tools. And people across Europe who are ignorant of politics and economics struggle to articulate what it is that they find relevant about Brussels. They just know that whatever it is, this visionary federalist dream that it's not for humble citizens but for elites, the same governments which have drifted so far apart from the reality of voters' needs and what should be the priorities for a country struggling with social issues, healthcare, housing and education, among other issues.

All of these ideas culminated into one broad repository of vitriol: the obsession with immigration.

Because of the single market ethos, generations of Europeans were told that the EU was a great thing as it provided us with a free movement of goods, services and people. But in a recession, most didn't think that slack border control on one side of Europe would result in swathes of immigrants from Arab and African countries turning up in the other; or for that matter, poor Europeans in Romanian and Bulgaria arriving in the U.K., for example, en masse to work hard and earn a living by undercutting local electricians and plumbers. And perhaps Europeans were naïve as the free movement also allowed for Eastern European countries' Roma gangs to merely take a bus and export their services in richer EU countries like France and the U.K., robbing citizens blindly on the streets of London and Paris while journalists film them doing so.

But it is Britain which now plays an enormously important role as the U.K., a strong ally of Turkey, stands alone as the only country whose people are going one stage further. For most Brits using the European elections as a protest vote to the mainstream parties is not enough. In fact, many would argue that it would not have happened at all if David Cameron would have kept his promise for an earlier referendum on whether Britain should stay in the EU or not. Now, he has been pressured to put his name to a 2017 date, based of course on him being re-elected.

But just draw breath and think about this for a second. If Britain in 2017 votes to remove itself from the EU, there will no longer be an EU left as its dwindling popularity is at such an all-time low, that it will simply implode. Think about the pressure on the struggling eurozone countries to take the opportunity to also bail out of the project - or at the very least stay in - but demand that their bailout debts are written off. The first country to follow would almost certainly be Spain as it's the only country in the eurozone who really did join the single currency almost entirely for political capital in Brussels and not for any financial gain. It's the only country which had a real non-eurozone economy in South America and it's the only country which has really seriously looked into the idea of a "new peseta." In one stroke of a pen it could cancel its debt, control its own monetary policy and attract a massive amount of trade in goods and services which it can't do now as it's a eurozone country. If Britain left the EU, the pressure on Spain to leave it too would be amazing.

But there will be snags on both sides. If Britain left, European countries which were always resentful of the U.K., like France, would certainly carry out petulant measures to not buy Britain's goods. A boycott, perhaps even an official one, would take place which in the short term, even UKIP's Nigel Farage, a former city trader who perhaps believes he is an economist, can't even deny would harm the U.K. Europe is still the U.K.'s largest trading partner. Britain still buys more champagne from France than any other country.

Perhaps there would be even more need of bubbly though once out as some argue that the U.K. would attract even more Foreign Direct Investment and start to unshackle British companies from tomes of ridiculous EU directives. Britain could also stop the immigration flows of non-skilled people from Eastern Europe and develop its own policy of attracting skilled workers from Commonwealth countries like India and New Zealand, who currently find it very hard to get work in the U.K.

Nigel Farage of UKIP has done what many thought was the impossible by forcing the hand of the incumbent government to agree to a referendum. It's complicated more though by Scotland's dithering on its own independence from England with some wanting very much to be a small, EU member state independent of London's decision making but very much part of the EU. If Scots are not able to have their own referendum in time, then a U.K. referendum voting to leave the EU is not as clean cut as it might have been, if the question was only put to English and Welsh people. Many Scots might vote to stay just as a protest vote to Cameron to scupper his plans and get him to agree to a compromise solution for Scotland which satisfies both of their divided camps over what is the best future for the Scots. It makes no sense to any Scotsman to be part of a U.K. which votes Scotland out of EU membership and this is the conundrum which David Cameron's battling with, one which the nail-biting old guard in Brussels is following each day.

The EU's forefathers could never have imagined that its entire apparatus would be hijacked in such a way. And no Englishman could ever imagine David Cameron to be such an important player, albeit on the periphery of Europe (just like Churchill in fact who spouted in 1957 the EU was a great idea.for the Europeans!).

But is it all about call center governance from member states who outsourced all the power and responsibility to Brussels, and then couldn't stop the hand that rocks the cradle? And what could save the grandiose project now? Few will think that the EU needs a strong leader to take it out of troubled waters, as the top jobs of Commission President and EU Council President become vacant soon.

The Economist recently floated the idea of Christine Lagarde for President of the Commission. A woman president is modern and might connect with a lot of citizens. But Lagarde, currently running the IMF in Washington has not even thrown her candidacy in the ring. Yet another woman has. Helle Thorning-Schmidt, Denmark's Prime Minister might storm home when MEPs vote in the coming weeks for the top job. There has never been a candidate who is so prolifically signed up to the corrupt club of the Brussels elite who, when she was an MEP herself left her mark on lobbyists and journalists in Brussels by calling for a new EU directive which reduced the number of hours a vibrating seat on a European farmer's tractor could shake his bottom. You can't make this stuff up.

A woman leader for the post, yes. This should be what the EU apaches should be reckoning on. But not the Dane who is already suggesting that Denmark should join the beleaguered single currency as a sweetener to Eurocrats in Brussels. But they won't swallow the pill. There is already the NATO chief in Brussels who is Danish and this on its own will be enough for many EU countries to argue against her bid. None will argue that the EU needs a strong leader with great charisma, an understanding of economic policy and international relations. Or even one who has worked as an 'outsider' to the EU's ailments and understands them better than most. As an outsider, France's former Finance Minister and current IMF Chief Christine Lagarde looks like a Joan of Arc figure for the sinking EU. But a quick glance at the list of "usual suspects" shows a number of Eurocrats, plus two former prime ministers from Belgium and Luxembourg. What will it take for the old elite in Place Chatelaine to wake up and see the abyss?

*Martin is currently living in Beirut where he reports for Deutche Welle English and The Daily Mail (U.K.) @MartinRJay