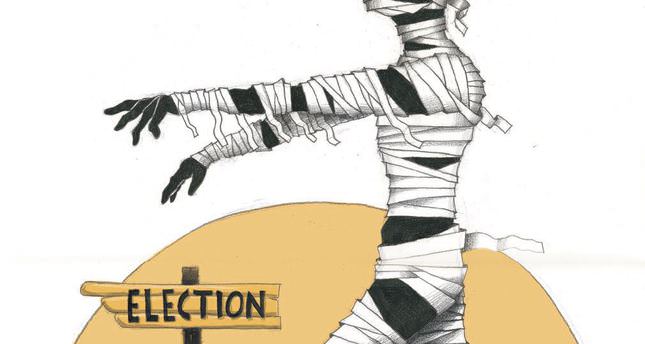 Egyptian coup leader Abdel Fatah el-Sissi, who ousted the country's first democratically- elected government on July 3 last year, is now busy with an ominous plan to make himself Egypt's direct ruler. To achieve his Pharaonic aims, he has resorted to the worst kind of repression against democratic voices. His tyrannical acts are designed to ensure his continuance as the unchallenged dictator like others in the region under the garb of an electoral farce. Meanwhile, the world remains a mute spectator to the military junta's barbaric crimes against those opposed to Sissi's rule.

The most ironic and tragic part of Egypt's political drama comes from the Saudi monarch's support for Sissi's ruthless crackdown on dissent. It is equally sad that Egypt's Salafi groups are supporting Sissi's disgraceful acts because they cannot displease their Saudi masters. Salafism, with its basic ideological attributes, claims to be the puritan belief of Islam. But the Saudibacked Egyptian Salafis are insulting Islam with their dishonest conduct.

What these people are doing is a disservice to both their nation and religion. They are condoning mass murder and gross injustice and surrendering their conscience to Saudi petro-dollars. The Salafis of Egypt must not be under the illusion that the Saudi king's support for Sissi is just to subdue Arab uprisings and to protect his dynastic rule. His backing of the Sissi cabal is also definitely not for safeguarding Islam as the gullible Salafis might believe.

The Salafi movement and Saudi Arabia's Salafism - with its core emphasis on following the Quran and Sunnah as understood by the pious predecessors (companions and first two generations of Muslims) - can be traced to early Islam. The way it differentiated itself from other schools of thoughts since then was not based of blind following of ijtihad, based on a single individual scholar, but rather collectively evaluating the opinions of contemporary scholars.

Across many generations, they have remained associated with various names - like Ahlul Hadith - and considered their way of understanding Islam to be the most correct one. They are against innovations in Islamic practices like grave worship, and are also strictly against concepts such as Taqiyah and Mutah that are found among Shias, whom Salafis consider misguided. It may be surprising to many that by and large the Salafis historically have not been associated with politics.

In fact, they avoided it. Their uncompromising attitude on many issues put them at odds with rulers and many were persecuted. Modern day political Salafism or neo-Salafism as a political movement has its origin in the establishment of the Saudi state. The religious advice started by Sheikh Muhammad bin Abdul Wahab, morphed into a full-fledged force to reckon with after they were aligned with the Saud family. The bargain of their pact is well known: religious affairs being looked after by Salafist like Sheikh Muhammad bin Abdul Wahab or their lineage i.e. Al- Shiekh, and political affairs are being controlled by the Al-Saud dynasty.

The political acumen of the initial Saudi rulers and the religious zeal of Sheikh Muhammad bin Abdul Wahab and his followers gave each other the required strength, and they set out to conquer and establish the Saudi family's rule in the Arabian Peninsula. However, this put them at odds with the Ottoman Caliphate, which defeated them twice and destroyed the initial two Saudi states that were formed. During one such war, the religious leader of that time, Sulaiman, the grandson of Shiekh Muhammad bin Abdul Wahab was executed by Ottoman rulers, and then they took the Saudi ruler to be hanged in public. It was the third war during which Arab tribes were encouraged by the British Empire to revolt in the name of Arab nationalism that led the Saudis to establish what is known as the Kingdom of Saudi Arabia.

Many people who visited and studied in Saudi Arabia were influenced by Salafi thought and later they took the teachings to other parts of the world. However, it was the oil boom, which benefited both the Saudi dynasty and also the clerics aligned with them to spread Salafism.

It is noteworthy that various state-appointed religious bodies like the Council of Seniors Ulemas (COSU) are not the only group of Salafi scholars in Saudi Arabia, even though they are the most supportive of all major decisions of the Saudi regime.

What started as the separate religious body of Ikhwan (as the initial religious group that supported the Saudis were known as) were systematically reduced to just an advisory body directly under the control of Al Saud. This brought the religious department under the political leadership of the Saudi ruling family.

The Saudi state was the prime sponsor in terms of publishing religious literature, funding and distribution globally, while the religious leaders, especially of COSU, were projected and highlighted by the state.

Senior scholars were given significant authority in shaping the religious and political opinion of Muslims worldwide.

Salafis in Egypt and Saudi influence

Salafis had surprised many in Egypt and beyond with their tremendous performance in the Egypt's first free and fair parliamentary elections where they won about 25 percent of the parliamentary seats. Since the beginning of Mohammed Morsi's rule in Egypt, the Salafis tried to influence the Morsi government to implement a stricter form of Islam in the country.

The dramatic policy turn of Egyptian Salafists during Sissi's coup and later their unconditional backing of the junta regime has removed all doubts about the Saudi designs to control Egypt.

Now they are shamelessly backing the coup regime, which is destroying long-held Islamic traditions of Egyptian society.

The Salafis in Egypt face a big dilemma. Their unscrupulous support for the coup regime, though pleasing to their moneyed Saudi patrons, is against Islam's cherished values. They have perverted the very faith they claim to profess. The Salafis have become tools of dictators against the Arab people's desire for democracy and freedom. It's difficult to see how they can come out of their ignorance and move away from the Saudi monarch's plans to use them for his own narrow political aims.

Once Sissi establishes greater control over Egyptian society, he will move to marginalize them the way he is doing with the Muslim Brotherhood and other groups.

The Saudi regime cares only about the continuation of its own rule and will easily turn its back on the Salafis once they are in a weak position. It's also difficult to see how they will be able to get Shariah laws implemented in Egypt according to their interpretations as they demanded during president Morsi's rule.

Saudi Arabia's political influence has declined significantly in recent years. From the coordinator and arbiter of pan-Arab politics it now has been reduced to a monarchy gripped by suspicion and fear. The decline in Saudi political influence has contributed to a growing sense of disillusionment among citizens, whose belief in the system has drastically gone down.

Saudi Arabia's open support for Sissi's slaughter of hundreds of protesters and its inability to do anything meaningful to help the Syrians facing Bashar Assad's brutal onslaught have come as a blow to the political Salafi movement. A growing number of people inside Saudi Arabia and in other Arab countries in the peninsula question the viability of Salfism in today's regional setting.

The post-monarchy history of Egypt may be summed up as "Egypt has been passing through popular dictatorship (Nasser), liberal dictatorship (Sadat), corrupt dictatorship (Mubarak) and finally the brutal military dictatorship (Sissi) with zero legitimacy. The one-year interregnum of a democratically-elected government in the six decades of dictatorial rule says a lot about the kind of country Egypt is.
The post-coup Cairo is sinking into a new wave of political viciousness and violation of human rights with bizarre mass trials and mindless death sentences given to hundreds of people. Egypt's judiciary is being ridiculed everywhere.

The country has turned into a graveyard of human rights and democracy. Salafis must to show their solidarity with democracy in accordance with Islamic values rather than being swayed by the vile parochialism of the Saudi monarchy.