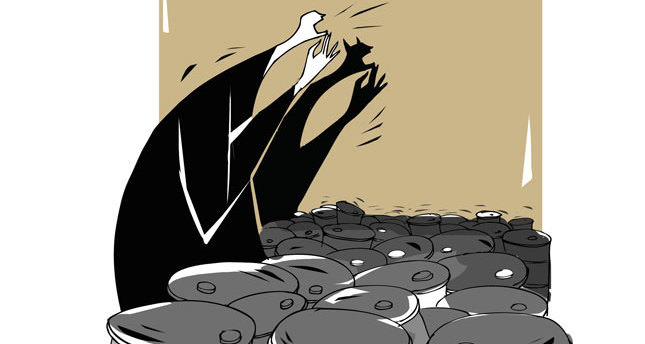 by Yerevan Saeed Jun 04, 2014 12:00 am
In coordination with Turkey, the Kurdistan Regional Government (KRG) sold its first shipment of 1.3 million barrels of oil to anonymous buyers on May 22.

The KRG's move elevated the long-standing oil dispute between the KRG and Iraq's federal government to an international level as the U.S. stands against the KRG's unilateral move, while Turkey, and potentially some European countries, remain on the Kurdish side to sell its oil. In the meantime, Baghdad filed a lawsuit in a Paris-based international arbitration court against Turkey for allowing the sale of "Iraqi oil" without its approval, while vowing to target any buyer that lifts the oil from Ceyhan port.

The sale, which is considered "illegal" by Baghdad, has caused a diplomatic row internally, regionally and internationally. On the national level, the already soured relations between the Kurdistan Region and Baghdad has only worsened as the latter stepped up its rhetoric by calling sold oil "robbery" - a claim the Kurds reject, while vowing to continue selling oil in defiance of Baghdad.

Regionally, Turkish-Iraqi ties reached a new low as Baghdad holds Turkey responsible for facilitating the oil sale from northern Iraq. Turkey insists that Iraqis sold their own oil and they only facilitated the procedure. In the meantime, Turkey said it would be happy to mediate between Irbil and Baghdad to reach a deal over the sale mechanism. Baghdad has repudiated Turkish offer and consider it as meddling in Iraqi internal affairs.

On an international level, the U.S. reaffirmed its long-standing position on the issue by refusing to recognize any independent sale by the KRG without proper permission of Iraq's central government. The State Department said it would not take sides in the issue and remains neutral in the hope of bringing Irbil and Baghdad to an agreement. However the U.S.'s assertion that any oil sale should go through Baghdad could bring the neutrality of the State Department into question as there is no any mandate in the Iraqi constitution to authorize Iraqi federal government the sole power to sell oil.

"We don't support oil exports from any part of Iraq without the appropriate approval of the federal Iraqi Government," Marie Harf, a US State Department spokeswoman told reporters.

This stance was echoed by Deputy Assistant Secretary of State for Near Eastern Affairs Brett McGurk who has been involved in a shuttle diplomacy between Irbil and Baghdad for the last several months, hoping to convince the KRG and Baghdad to agree with the terms of his "win-win-win" deal. According to McGurk's deal, Kurdish oil would be exported and sold through Iraq's oil marketing authority known as SOMO in return KRG would receive its 17 percent revenue entitled by the Iraqi constitution.

"Over the past year, we helped develop a proposal with all sides that offers a win/win/win outcome. The proposal resolves legal uncertainty over KRG exports and guarantees auto transfers for all revenues derived from KRG oil to Irbil. It would immediately derive substantial and reliable revenues for the Iraqi people including tens of billions of dollars for the KRG. We have encouraged the KRG to accept such a deal, thereby guaranteeing monthly revenue allocations based on Iraq's total output," said the US diplomat in a series of tweets on his official twitter account.

The U.S.'s "win/win/win" deal appears not to have been attractive to the Kurdish leaders as it fails to address Kurdish long-term security concerns informed by past grievances and bitter experience with Iraq's successive central governments, coupled with broken promises from a series of Iraqi leaders that has led to serious trust deficit over the years.

For this, Kurds are haunted by a security dilemma in Iraq, where the future is uncertain. Furthermore, the Kurds feel that time is not on their side as Iraq moves towards authoritarianism under the leadership of Prime Minister Nuri Maliki, and the U.S. will soon deliver 30 F-16 fighter jets to Baghdad, a weapon that has historically menaced the Kurds in the north.

Accordingly, Baghdad's acts cornered the Kurds to expedite ways to of finding revenues independent of Baghdad to fund their own government and pay civil servants who have gone without pay for several months - the oil sale appears to have been the best option to compensate some of the financial losses incurred by Baghdad's refusal to send the KRG's national budget share mandated under Iraqi constitution.

The "budget cutting," which the Kurdistan Region President Massoud Barzani called an "act of war," escalated the situation by slaughtering diplomatic channels and deepening the trust deficit between Baghdad and Irbil.

"By transporting and storing crude oil from Kurdistan, and by loading that crude oil onto a tanker in Ceyhan, all without the authorization of the Iraqi Ministry of Oil, Turkey and BOTAS have breached their obligations under the Iraq-Turkey Pipeline Agreement," said the Oil Ministry's statement posted on its website.

In response to Baghdad, the KRG vowed to continue oil export and sale, as it believes to be within its constitutional rights to control natural resources that are located within its territory.

"This is the first of many such sales of oil exported through the newly constructed pipeline in the Kurdistan region," it said, adding that the revenue would be treated as part of the region's share of the national budget," said KRG's statement.

The Kurds have been a natural ally of the U.S. since 2003. Despite frictions, Kurdistan is still proud that no U.S. soldier has been killed or wounded on its territory. Kurds have protected Americans and fought side by side against Saddam Hussein, and later against al Qaeda, in Iraq.

Consequently the U.S.'s position towards the KRG in its struggle with Baghdad also appears to have pushed Kurds to reassess their relations with Washington and develop stronger diplomatic and energy ties with European countries, as evidenced by senior Kurdish officials' frequent trips.

Earlier this year the Kurdistan Regional President Massoud Barzani refused to visit the White House to meet President Barack Obama for talks about bilateral relations and Iraqi developments. Although the KRG said the reason for the cancellation of Barzani's trip was due to having the two main Kurdish parties, the Kurdistan Democratic Party (KDP) and Patriotic Union of Kurdistan (KDP) on the Tier III list of the terrorist groups, no doubt the U.S.'s firm stance against the KRG's oil policies seem to have influenced Barzani's refusal to visit the White House last February.

To recoup potential aloof diplomatic ties with the Washington, the KRG has shifted its focus towards Europe, where Kurdish grievances seem to be better understood and Europe is more receptive of the KRG's vision toward the future of Iraq. In less than a year, President Barzani visited Paris and met his French counterpart François Hollande twice to further develop Erbil-Paris diplomatic, trade, economic and cultural ties.

According to the KRG's top diplomat official, in the meeting with President Hollande, the French officials vowed to stand with Kurdistan not just now, but in future stages. It's not clear what Mustafa means by "future stages,' but it's likely to signal a potential Kurdish move towards independence should Baghdad fail to change its centric views to deal with Kurdistan and violates the Iraqi constitution, which guarantees the territorial integrity of the country.

"The Prime Minister's visit is a chance to celebrate the warm relations between the U.K. and the Kurdistan Region of Iraq, with links in areas as diverse as trade, education, and culture, and to reaffirm the U.K.´s desire to remain the region's partner of choice on all of these issues," said Hague, speaking after the meeting.

Of course stronger ties with Europe does not mean the end of U.S.-Kurdish relations rather the KRG does not want to put all its eggs at Washington's basket. Probably learnt from previous bad experiences with American administrations, the KRG deems it necessary to diversify its international diplomatic relations to mitigate risks of any potential deterioration of Washington-Irbil ties.

The KRG also feels that its long-standing love for the U.S. has remained unrequited after a decade of close cooperation with U.S. governments in the fields of diplomacy, military, intelligence and the KRG's constant concessions on what it calls "constitutional rights" in Iraq with the minimal rewards by the U.S. in particular in Kirkuk, which is considered as a "disputed territory" between Irbil and Baghdad.
Despite the diplomatic row, the sale of the Kurdish oil has set the tone to commence a new relationship between Irbil, Ankara and Baghdad with ramifications to the Kurdish-U.S. ties in the future. The KRG feels that the U.S. does not understand its long term well-founded security concerns supported by bitter experiences with previous successive governments in Baghdad, which culminated in the genocidal campaign against the Kurds less than three decades ago that resulted in the killing over 180,000 Kurds.

Thus Kurds are deeply agitated about their future under unpredictable governments in Iraq and ask, what's the guarantee that once more they would not be subject to the past persecutions? To mitigate the risks of this possibility, the KRG has found Turkey as a reliable strategic long-term partner through economic and energy integrations that are mutually beneficial.