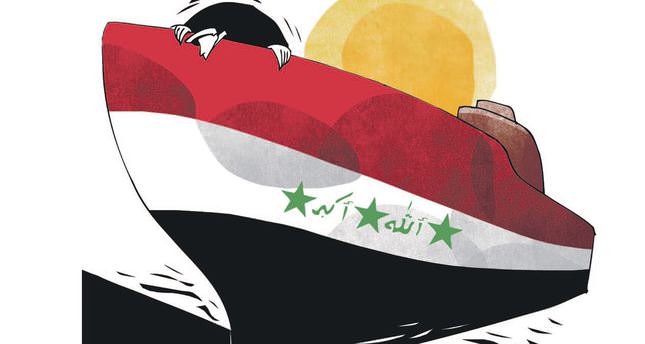 by Othman Ali Jun 05, 2014 12:00 am
On May 19, the Independent High Electoral Commission (IHEC) announced that 62 percent of the 22 million eligible Iraqi voters had cast their ballots. Close scrutiny of the results reveals that no radical change occurred in the Iraqi political landscape compared to the 2010 election results.

However, observers of Iraqi politics have noted several points. Firstly, the election results confirmed that the Iraqis, by and large, have voted along sectarian and ethnic lines. In spite of numerous political and economic crises that had been deepening, Prime Minister Nouri al-Maliki's bloc managed to win most of the Shiite votes in Baghdad and southern provinces, and reverse the losses that he had suffered in the local elections last year. Secondly, the Muwatin bloc of Amamr al-Hakim's ISCI failed to maintain momentum of its success in the local elections just few months ago. Thirdly, the Sunni Arabs lost a considerable number of the votes due to the ongoing war in al-Anbar province, government restrictions on movement of voters in the six Sunni provinces, and the deliberate flooding of the Sunni Arab belt around Baghdad.

Fourthly, the Kurds won more than 70 percent of the vote in Kirkuk province, which may enhance their claim to the disputed status of that province. Fifthly, Turkmen also suffered losses, and this has been attributed to the division of Turkmen votes along sectarian line, the weak leadership of the Turkmen Front, and the fact that some Turkmen voted for the popular Kirkuk Kurdish mayor who has previously paid special attention to the improvement of basic services in Turkmen districts in Kirkuk.

In the Iraqi Kurdistan region, the Patriotic Union of Jalal Talabani managed to make a surprise comeback and eclipse its rival the Gorran Movement with 21 to 9 seats. It is noteworthy that the PUK had suffered a serious defeat in the regional elections only six months ago and was far behind the Gorran Movement. The sixth and final point is that the secular Civil Alliance, led by the Iraqi Communist party, managed to win five seats. Although a modest gain, it is an indication of initial frustration with the Shiite and Sunni Islamic parties which have contributed to the rise of sectarianism since the fall of Saddam's regime and have utterly failed to deliver peace and basic services.

The reasons behind the elections results

There are a multitude of reasons for the way the Iraqis have voted. First and foremost, Iraq is experiencing heightened sectarian tension which is not a familiar phenomenon in its recent history. Sunni sectarianism as crystallized in al-Qaeda-affiliated groups and the influence of Iran-backed Shiite extremism have equally contributed to this phenomenon. Secondly, The Kurds feel that they have little in common with the Arabic-speaking regions of Iraq, except for a legacy of massacres overseen by Saddam in which as many as 200,000 Kurds were killed in the 1980s and 1990s, a period they call the Anfal Campaign or what Kurds see as the War of Annihilation. Erbil has been transformed by new oil money and bears almost no resemblance to Baghdad. Therefore, it is no surprise that Iraqi Arab parties (Shiite or Sunni) failed to win any seats in the Kurdish regions.

Moreover, the victory of Maliki's bloc has been attributed to rigging, manipulation of residual Shiite fear of Sunnis and growing sectarianism among Shiites. Even groups within his Shiite alliance accuse him of wide-spread rigging of election results during the counting process, which was carried out solely by pro-Maliki-appointed employees, far from the eyes of observers or representatives of other groups and in the absence of any built-in mechanism to ensure the non-partisan nature of those employees. Maliki's access to the vast patronage networks that he established during the past eight years, and his control over the security forces (the army and internal and external security units), the courts and judiciary were instrumental in influencing the election outcome.

Maliki has managed to consolidate his power, marginalize the parliament and independent institutions, control the military and security apparatus, subjugate the judiciary, and expand his political patronage at the expense of his rivals.

Furthermore, in order to rally Shiite support before the recent elections, and realizing the extent of his unpopularity due to the decline of basic services, rampant corruption and nepotism, Maliki decided to start a sectarian war against the Sunnis in Anbar province. He inaugurated this war in Karbala in a speech with an explicit sectarian tone. He said, "Our soldiers who are attacking the terrorist extremist groups are the army of Husain [the Shiite Imam] and the enemies are those who are fighting for Yazid."

Maliki was also able to tap into the Obama administration's short-sighted Middle East and Iraq policies. The U.S. administration rushed to his so-called "war on terrorism" and managed to alienate Sunni Arabs, and this made Anbar province a bastion of al-Qaeda-related terrorism. The U.S. support to Maliki gives him some credibility of having international power behind him and this convinces some Iraqis that he is a strong man of Iraq.

Can Maliki have his third term in office?

It appears that Maliki will do whatever needs to be done to maintain power. The main reasons for this are his conviction that the Iranians will eventually support him and his fear that should he lose power he would face many legal charges for numerous violations of the Iraqi constitution. However, the election results make Maliki's attempt to have his third term as prime minister extremely difficult. He has to address many concerns of the Shiite alliance whom he alienated. Besides, both Kurds and Sunni Arabs have repeatedly stated recently that they do not trust him and should the Shiite alliance nominate him they will go their way.

To ensure his third term, Maliki needs to piece together 165 votes in parliament. His bloc has only 95 members. Based on his rhetoric, he wants to form a government of winners with a simple majority. He attributes past failures of his government during the last eight years to the defects and flaws of the coalition government, which tried in vain to appease the representatives of all groups.

This approach on the part of Maliki has insurmountable challenges. Iraq has not yet developed a democracy based on merits and citizenship to accept a majority government. Besides, the Iraqi constitution is based on what is known as a federal democracy which is run with the consensus of the important segments of the Iraqi population. Furthermore, the practice of governing in Baghdad since the fall of the authoritarian rule of Saddam in 2003 has been based on a system of confessionalism. This is similar to that of Lebanon.
Under the guise of forming a "majority government," Maliki wants to reverse this practice in favor of a centrist government based on Shiite hegemony with token Sunni Arabs and Kurds added. This is an attempt at remaking Saddam's personalist style of rule, and an emulation of the experience of authoritarian Shiite clerical rule in Iran. It is no surprise that Maliki had to travel to Iran twice in only two weeks to have the blessing of the regime there and ask them to put pressure on the rival Iraqi Shiite groups to join him.

Iran has many stakes in keeping Maliki in power. In clear defiance of the U.S. and the West, and in spite of his numerous assertions, his government is supplying Bashar al-Assad's regime with war supplies. Besides, the pro-Iranian Iraqi groups such as Asa'ib Ahl al-Haq (a group that broke away from al-Sadr's Mahdi Army), Kata'ib Hezbollah, and the Badr Organization, have been fighting in Syria in support of the Assad regime. These militias have begun to remobilize inside Iraq and are said to have infiltrated the security forces. They have a free hand in Iraq to wage war of sectarian cleansing and sending militias to Syria.

Maliki needs the votes of the Sadrist Ahrar and Hakim's SICI, as well as the votes of small splinter Sunni Arabs, and probably already has the 21 votes of the members of the Patriotic Union of Kurdistan (PUK). It is noteworthy that both the U.S. State Department and the U.N. have declared that they would like to see the formation of a broad-based government in Iraq which will have representatives of all segments of the Iraqi population. This goes contrary to Maliki's plan and has apparently irritated him.


On May 23, 2014, Sadiq al-Laban, a leading member of the state of Law bloc, remarked that these statements are an "unwarranted intervention in Iraq's internal affairs and represent U.S. officials' unrealistic appreciation of the situation in Iraq."

Turkey also has important stakes in preventing the disintegration of Iraq. Ankara needs to be proactive in this regard by opening lines of communication with the U.S. and even Iran in order to allow the Iraqis to have an opportunity to elect a prime minister who is capable of taking Iraq out of an imminent civil war and preserve Iraq's territorial unity. Should the Iraqi Shiite groups stick to their declared policy of non-cooperation with Maliki and resist Iranian pressure, Iraq has a chance to form a broad-based government and flourish as a democracy in the region.

*University of Salahaddin and the Kurdish-Turkish Studies Center