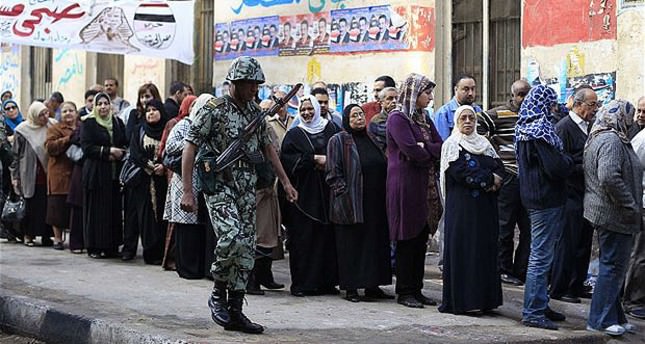 by Menwer Masalmeh Jun 07, 2014 12:00 am
Egypt now has completed its presidential polls and as expected Abdel Fatah el-Sissi emerged victorious. During the election campaigns, observers of the election find themselves watching a play in which the roles have been already distributed, and the closing scene was previously determined. On May 17 the Carter Center published a report which included concerns about Egypt's political transformation and "the lack of a genuinely competitive campaign environment."

In the election, both of the candidates lunched unrealistic and unplanned electoral promises which lacked details, making these promises nothing but demagogic promises thrown in the air. In the following lines, the statements of Sissi during his election campaign will be analyzed since the Egyptian media has had an intensive interest in Sissi until it became a propaganda bullhorn for his campaign. The most noticeable point in the long televised interview for Sissi on May 6 is his repeated trials to avoid setting a timeframe commitment to his vision.

Instead, he linked his ability of realizing these plans to how far the Egyptians will cooperate with him, which implicitly displaces a great part of the burden from his shoulders and would excuse him from accountability in case of failure. He even addressed the Egyptian citizens with the phrase "I have nothing to give you," which is considered a bizarre statement especially in light of the hard circumstances that Egypt is going through.

It is well known that electoral campaigns are usually accompanied with promises of development, prosperity and new investment opportunities. Yet, Sissi's electoral speech was anything but that. He seemed like a fundraiser, which is inappropriate in terms of the philosophy of running a country. He is also planning to rely on Egyptian expatriates' and some Gulf States donations in addition to the principle of austerity and reducing consumption which stems from the internal conscience of the Egyptian citizens. This kind of vision is unrealistic, not enough and meaningless taking into consideration that Egypt is a country with more than 90 million people, not to mention that about 30 percent of Egyptians live below the poverty line.

In regard to the private sector, it is supposed to contribute to thriving economic situations, but in Egypt through the last three decades this was not the case, where capital was piled up by businessmen. Research conducted by the Carnegie institute titled "above the state: the officers' republic in Egypt" clarified how the military institution is dominating Egypt economically, in addition to their penetration into civilian facilities of the state to ensure the continuity of their grip. Perhaps the concern of shaking the military institution's prevalence by the brotherhood rule was the reason behind the military coup, where now Sissi - is the new president - is expected to be the vanguard for their interests.

Sissi's electoral rhetoric didn't reflect the required seriousness and reality, which led his campaign advisor Mohammad Bahauddin to describe these talks as a vision not an electoral program. Bahauddin also added that no electoral program would be suggested. That ambiguous description of Sissi's vision will raise speculation about Egypt's foggy in the coming days.

It is quite clear that we witnessed strange electoral behavior where there were no basics of a democratic process such as genuine competition, serious electoral programs and transparency. These aspects are indications of the return of the authoritarian rule which implies the absence of freedom, social justice and dignity. Therefore, many observers saw the presidential polls in Egypt like a nail in the coffin of Jan. 25 revolution.