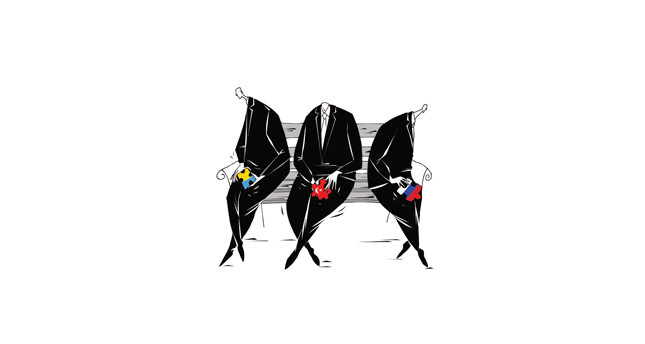 As much as Turkey's political, military, economic and socio-cultural capacity has widened in the region, its foreign policy will also be forced to confront more problems

The latest events in Ukraine and in particular Russia's seizure of Crimea have undoubtedly stranded Turkey with regard to its northern neighborhood policy, as the Syrian civil war has already hedged the country in its foreign policy in the south. As is well known, the Crimean Peninsula once again became a Russian outpost on the Black Sea in the midst of the ongoing Ukrainian crisis. Unfortunately, the Turkish public could not have necessarily focused on the Ukrainian protests, while the reckless debates over Turkish local elections during the shady process of the Dec. 17 operation dominated Turkish domestic politics.

In this tumultuous political climate, Turkish foreign policy has maintained a low profile and conformist stance - if that is the correct way to label it - toward Ukraine and Russia. Turkey's quandary substantially stems from both its historical affiliation with Western cultural, political and security institutions and its recent robust commercial partnership with Russia. In brief, Turkish policy-makers seemed ambivalent in their rhetoric concerning Russia's recent geopolitical move toward Ukraine in particular and Russia in general.

The issue is the question of whether or not Turkey can maintain a lowprofile conformist approach and keep up appearances vis à vis Russia in its zero problem understanding with its neighbors. Charming with its a priori theory, the zero problem principle, propounded by Foreign Minister Ahmet Davutoğlu, would unavoidably reveal some hurdles in the practice of Turkish foreign policy, especially with Russia in the post-Soviet region and with Iran and Israel in the Middle East since Turkey has started to extend both its hard and soft powers in those regions under the auspices of the incumbent Justice and Development Party (AK Party) government.

In this sense, one of the areas in which Turkish-Russian relations get into trouble would obviously be Eurasian affairs from now on because Turkic-Muslim geopolitics and Russo-

Orthodox Slavonic Eurasianism have been centuries-old competing ideas, which have shaped hitherto formal and informal institutions of statehood and national-intellectual capitals in Eurasia.

From the perspective of a realist standpoint, Turkey and Russia sooner or later, directly or indirectly, would have diverged on critical military-political and socio-cultural issues in the region although both sides enjoy flourishing economic relations in the current phase of bilateral relations.

However, such a reality has already started being observed day by day in the Syrian crisis, about which Turkey and Russia essentially separated in terms of diplomatic and military means. Russia's vital support for the al-Assad regime in Syria created discontent among Turkish policy circles, while outrageous war crimes have persistently been maintained against civilians. Since the beginning, Putin-Lavrov leadership in Russia designated the Syrian conflict a strategic one, whereas Erdoğan-Davutoğlu management in Turkey regarded it as a moral issue. Russia's strategic realism about Syria has thus far been clashing with Turkey's idealistic moralism, so to speak, and the Russian stance toward Syria never changed in Geneva, and it seems Russia would sustain that solid view for the sake of its geopolitical and economic interests in the Middle East.

In addition, the most concrete development that might constrain Turkish-Russian relations has been witnessed in the new status of Crimean Tatars, who willy-nilly became "fellow citizens" of the Russian Federation (RF) after the March plebiscite. President Vladimir Putin immediately approved Crimea as the new oblast of the RF and welcomed the Crimean Tatars in his first visit to the peninsula soon after the annexation.

On the other hand, Russian authorities banned the entrance of Mustafa Abdülcemil Kırımoğlu, the leader of Crimean Tatars, to the peninsula and opened an investigation about the activities of the Crimean Tatar Assembly recently.

In return, the Turkish leadership, foremost President Abdullah Gül and Prime Minister Recep Tayyip Erdoğan, expressed their concern about the wellbeing of Tatars and urged Russia; meanwhile, Foreign Minister Davutoğlu has started shuttle diplomacy to enable Kırımoğlu to enter Crimea. In the current situation, the issue about the Tatars is still waiting to be solved, but the rhetoric of Russian authorities does not go beyond constructive ambiguity and wishful thinking. Needless to say, this problem also raises some nationalist concerns inside Turkey and puts the Erdoğan government under pressure. If we think about the Tatars' unpalatable experiences during Soviet rule, it can be understood emphatically that Crimean Tatars are not happy once again integrating with Russia. In this respect, Turkic/Muslim minority affairs will remain a headache in Turkish-Russian relations in years to come, and another Turkic group, namely the Meskhetian (Ahıska) Turks, have already started to leave Eastern Ukraine amid pro-Russian separatist activities that aim to unite the Donbas region with Russia.

Seemingly, south Caucasus emerges as the most strategic area where the delicate balance between Armenia and Azerbaijan, Turkish-Armenian relations and energy geopolitics of the Southern Corridor would also affect the prospective level of Turkish-Russian relations. Without a doubt, Russia has succeeded in reasserting its strategic influence as the (de)securitizing actor in the region during the Putin-Medvedev diarchy by using the long-time frozen conflict of Nagorno-Karabakh in order to maintain the status quo. The 2008 Georgian war also consolidated the Russian position, and Russia de facto settled down the Caucasus through Armenia, though the Armenian state no longer has a territorial tie (border) anymore with the RF. Besides that, Russia and Armenia have agreed on Russian military deployment in the Armenian city of Gyumri near the Turkish border within the scope of the Collective Security Treaty Organization (CSTO), known as Russia's new "Warsaw Pact," where Armenia is currently the only Caucasian member.

In retaliation to the Russian-Armenian axis, Turkey has chosen to tighten its relations with both Azerbaijan and Georgia, particularly since the 2006 inauguration of the Baku-Tbilisi-Ceyhan Pipeline Project. Most recently, Turkey and Azerbaijan have also materialized the Trans-Anatolian Natural Gas Pipeline Project that is expected to revitalize the Southern Energy Corridor in the wake of the strategic impasse stemming from the new great game of geopolitics of Russia versus the West. Turkey is trying to decrease its energy dependence on Russia through the Trans-Caspian route, as the country is gradually becoming an energy hub in Afro-Eurasia.

All these developments, on the other hand, enhance Moscow's skepticism about neo-Pan-Turkist politics, considering Turkish-Azeri relations and fretting the Russian leadership about Ankara's growing roles, either in energy bargaining and transportation via the Southern Energy Corridor en route to Europe or peace-making and conflict resolution efforts toward the regional security complex of Caucasia. Turkey's initiatives to build up a mutual dialogue with Armenia at the expense of straining fraternal relations with Azerbaijan is also worth mentioning in this case, but the conventional Russian reserve on the Armenian polity does not permit such mutual confidence, either. In sum, Russia keeps the key to the Caucasian peace process, but oddly enough, the peace does not currently benefit Russia, and this fact would prevent a fullfledged Turkish-Russian partnership in the future.

As a final remark, I do not suggest decreasing the level of relations with Russia. I just want to warn both the Turkish public and foreign policy-makers in advance to be ready for some fragile issues that might distress Turkey regarding its newly-established - if not an alliance - political relations with Russia because Turkish-Russian rapprochement relies heavily on the booming commercial partnership, and it is still far from a win-win strategy due to Turkey's trade deficit that is largely sourced from its energy dependence on Russia. Rather, the nature of Turkish-Russian relations consists of the "no pain, no gain" rule inside. In this context, Turkey should not be engrossed in a conjectural economic détente with Russia, as the country's leadership once in a while has fallen into the same fallacy with the West, as during the Cold War when it became a taken-for-granted American ally later on.

Furthermore, Turkey's institutional affiliation with the Euro-Atlantic alliance still irritates Putin's neo-Eurasianist circle and stands as an obstacle to a political-military compromise between the parties.

Last but not least, Turkey might be said to be in the middle of a troublesome time period during which Russia and the West wage war against each other in terms of geopolitics, geo-economics and even military means after the Ukrainian crisis. In this regard, Turkey's economic realism should be well balanced with the political-military one, considering mutual relations with Russia in this new environment, particularly when the Turkish sphere of influence is being expanded to Eurasia, which is still perceived as a Russian "backyard" by a re-assertive Russian leadership under Vladimir Putin.