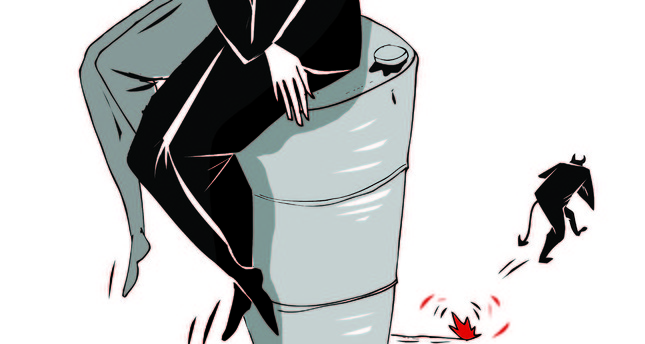 by Meriç Şar Jun 26, 2014 12:00 am
The stakes are getting higher in the political conundrum over the future of oil from northern Iraqi and the Kirkuk-Ceyhan Pipeline (KCP). An arbitral tribunal of three neutral legal experts will decide on the constitutional impasse of Iraq in the shadow of a civil war.

On May 23, Iraq's Ministry of Oil filed a request for arbitration before the International Chamber of Commerce ("ICC") against Turkey and BOTAŞ, a state-owned petroleum enterprise. According to early reports, Baghdad will seek a legal declaration that the Turkish side acted in breach of a 1973 treaty setting forth the legal regime of the KCP and other norms of international law by taking, storing and loading oil produced in Iraqi territories without the consent and instruction of Baghdad.

In this very rare example of state-to-state arbitration to be conducted under ICC rules with an arbitral seat in Paris, the Iraqi government will also plead for at least $250 million (TL 532.5 million) in damages from Turkey for lost revenues resulting from the alleged breaches.

If the case successfully passes through the jurisdictional phase, a neutral arbitral tribunal consisting of three legal experts will not only seek a resolution for a dispute over the interpretation of a 40-year old legal document governing the pipeline, but it will also face various legal questions closely intertwined with Iraq's federal law and the accompanying constitutional stalemate.

Since the claim is brought under a treaty executed by two sovereign states, the applicable law will be international law governing the legitimacy and interpretation of treaties. Yet more interestingly the three experts will inescapably delve into questions of Iraqi constitutional law in order to clear the question of the Kurdish Regional Government's (KRG) authority to unilaterally execute oil and gas contracts. Oddly, when the treaty was last amended in 2010, the Turkish and Iraqi governments chose French law as the governing law in the event of a dispute. As the minority opinion in the Turkish parliamentary commission meeting about the treaty noted at the time, such a choice of law in an international treaty is most probably not just legally defunct but also its practical function is susceptible at best. Yet, even the jurisdictional phase of such cases tend to take years to be resolved and often cause a mini-war on the legal frontier with hefty sums to be paid to legal experts for thousands of man hours.

Indeed, Baghdad and Irbil reached an agreement on how to share the net income from oil sales under Article 111 of the Iraqi constitution with the KRG receiving 17 percent of the proceeds from sales while the rest of the country takes the remainder. However, it is not cash that Baghdad is seeking, and being a merry deposit-holder of some offshore bank account would not extinguish Baghdad's desire to stay as the ultimate decision-maker in the planning and commercialization of the oil within its borders. Going through an existential struggle in a period of extreme turmoil within its borders, Baghdad is pushing to serve as the capital of national policy, an intermediary and a platform for the political discussion and deal-making to shape the economic development of all Iraqi communities.

However, the reality in Iraqi lands is a far cry from a properly functioning state, much less a bureaucracy capable of accepting a mandate to enforce any national policy other than self-defense. The emergence of armed groups acting with quasi-state functions such as the Islamic State in Iraq and al-Sham (ISIS) only deepens the quagmire. Baghdad's capacity to effectively rule Iraq in the foreseeable future becomes more and more susceptible in this not-so-distant scenario, where ISIS or its affiliates manage to gain loyal support in the population in the longer term and seek political status under sectarian lines. This may irreversibly damage Iraq's status as a sovereign state de facto and perhaps also de jure within the meaning of international law.

Landlocked in one of politically most fragile regions of the Middle East, the KRG and the Iraqi Kurdish community are seeking economic self-sufficiency, which for a time now has appeared to be within its grasp. The territory under the KRG's political mandate is claimed to have a major share of Iraq's oil reserves, amounting to 200 billion barrels (equal to 20 percent to over one third of all Iraqi reserves). Indeed, pursuant to the principles it has adopted through regional legislation in 2007, the KRG has signed more than 50 oil production-sharing contracts (PSC). Apart from a few major players such as Exxon Mobil, Total and Gazprom, companies that have signed PSCs with the KRG have been excluded by Baghdad from participating in the tender rounds for oil and gas concessions and threatened with possible cancellation of their existing contracts. Baghdad's view is that when it comes to the export of Iraqi natural resources, the central government holds the ultimate authority under Iraqi domestic law as well as under existing international agreements.

Although Iraq's view has been long supported by the U.S. State Department, the issue is far from being crystal clear under IC.

According to publicly available reports, the KRG's position can be summarized in two steps. First, the KRG interprets the general provision of the constitution as granting the KRG autonomy to legislate in relation to oil and gas as it is not explicitly reserved for the federal government. Therefore, the petroleum law that the KRG has legislated is constitutional. Secondly, the KRG attacks Baghdad's interpretation of Article 112 in two manners, both in its chronological and subject-matter application. The KRG interprets the expression of "present fields" within Article 112 as having an effect to limit the management powers of Baghdad to petroleum fields active before the declaration of the constitution in 2006. There were no producing fields in Kurdistan when the constitution came into force in 2006. The KRG also further claims that the term "management" within the meaning of Article 112 refers to other activities, such as management of petroleum after it is extracted (in relation to transportation and export). Finally, the KRG interprets the remainder of Article 112 as giving the federal government only limited authority for policy formation in areas such as setting production levels in the context of OPEC quotas, rather than regulation and contracting.

It has been reported that the KRG obtained a legal opinion in January 2008 from Professor James Crawford, a prominent scholar of international law and a frequent arbitrator presiding over cases involving sovereign nations as parties. Crawford's opinion, with certain reservations, concluded that the Baghdad does not have exclusive authority over oil and gas and the KRG has powers to manage the oil and gas fields that were not producing, developed or discovered before the 2006 constitution. However, the opinion noted also that pending agreement with the federal authorities on strategic policies, the authority of the KRG to approve the conclusion and implementation of oil and gas development contracts is unqualified.

The amended Article 3 of the 1973 Treaty, which governs the usage of the KCP, grants Turkey a limited right to use the pipeline for other purposes if the pipeline stays idle for an extended period subject to an approval of Baghdad without providing further clarity on whether Baghdad may abstain to provide such approval at its convenience. In fact, the KRG has constructed its own extension for the pipeline in order to circumvent the technical supervision of Baghdad as well as in an attempt to possibly by-pass the legal regime surrounding KCP. However, under the treaty, all oil transported from Iraq is deemed as Iraqi oil. Absent of Iraqi consent, the Turkish argument may not survive for long, considering that the parties have amended the treaty and the relevant provision as recently as 2010. As a potential bargaining chip for Turkey, Article 4.5 of the Treaty stipulates that regardless of the actual amount of oil flowing, Iraq will owe to Turkey annually a minimum level amount calculated over the full capacity of the pipeline.

ICC awards, contrary to the awards of other dispute resolution venues such as ICJ and ICSID, can be subject to legal review by domestic courts both early on and late in the enforcement phase. A French court may be called upon to invalidate the agreement to arbitrate and decide that the subject-matter of the dispute is not-arbitrable under the French law. Additionally, any final award will be subject to a legal review of domestic courts under the principles set forth in New York Convention at the enforcement phase. The convention give domestic courts where the enforcement is sought the option to abstain from enforcing the award if the award is against the "public order." Both Turkish and Iraqi courts are known to interpret the mentioned "public order" exception quite broadly and any award, regardless of who prevails, will possibly face further challenges in domestic courts. Thus, even if we would ignore all the unknowns surrounding Baghdad for a moment, its case is destined to face no less challenges than the ones looming above its political future.