The end of Iraq as a unitary state 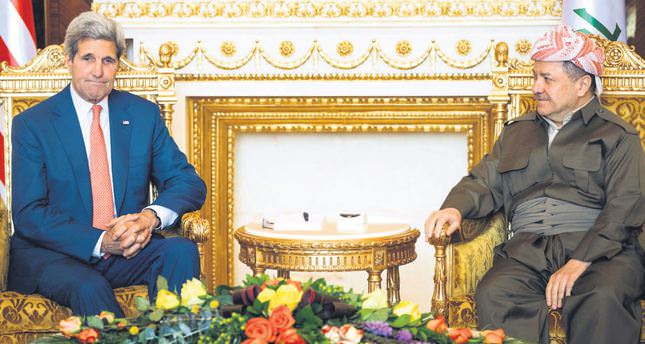 by Sharif Nashashibi Jul 09, 2014 12:00 am
D
ebate over Iraq's territorial integrity has existed since the 1990s, and intensified with the civil war that followed the U.S. invasion. However, at no time has Iraq as a unitary state looked more precarious than it does today.
One can argue that it no longer exists, given Sunday's declaration of a caliphate encompassing swathes of Iraqi and Syrian territory. A major announcement three days later by the president of the autonomous Kurdish region means Iraq could soon fragment further.
Massoud Barzani told the BBC that "it's the right of Kurdistan to achieve independence. From now on, we won't hide that that's our goal. Iraq is effectively partitioned now." There will be a referendum in "a matter of months," he added. That same day, his Foreign Minister Falah Mustafa told Al Jazeera English: "The time has come for the Kurdish people to determine their own future." Kurdish independence is the greater of the two threats to Iraq's territorial integrity, because the hastily-established Islamic State has no chance of long-term survival, let alone significant expansion beyond its current boundaries. Iraqi Kurds, however, have been steadily building the foundations of their own state for almost 25 years, since the U.S.- led defeat of Saddam Hussein in 1991.

The Islamic State has limited manpower and resources relative to its large size, as well as an array of formidable enemies where Iraq is concerned. While the U.S. is at odds with Russia, China and Iran over Syria, they are all backing Iraq's government and army.

Prime Minister Nouri al-Maliki has offered to arm civilians willing to fight the Sunni militants. He is also being bolstered by various Shiite militias, as well as a call by the country's top Shiite cleric, Grand Ayatollah Ali al-Sistani, for Iraqis to join the security forces. Powerful Shiite cleric Moqtada Sadr, although an opponent of Maliki, has threatened to "shake the ground" against the militants.

The result of all this external and internal support is that the lightning militant advance in Iraq has slowed, and the army is fighting back. The IS will not even be able to consolidate its hold on its present territory. Besides being under military pressure from many states and groups, it has committed a long list of atrocities against people under its rule, including Sunnis, whose sect of Islam it claims to champion. Thus it will likely face the same fate as al-Qaeda, which lost its strength and influence in Iraq because it so violated Sunni Arabs - the very community from which it drew support - that they rose up against it. There are already such stirrings within the caliphate.

Indeed, militants' swift territorial gains in Iraq were down to various groups - such as secular Baathists, who have reportedly been instrumental militarily - that do not have a theocratic ideology, and would resist living under one. These groups are fighting not because they want a caliphate, but because they have had enough of the marginalisation of the Sunni Arab community in Iraq since the U.S. invasion. Saudi Arabia has pledged to use its influence within that community to encourage it to join a new, more inclusive Iraqi government to better combat the IS.

Widening dissent from Islamist and jihadist leaders and groups will hinder a call by the caliph, Abu Bakr al-Baghdadi, for Muslims worldwide to take up arms and rally to his cause. So too will a clampdown by countries, regionally and internationally, on those who wish to heed his call. Given the array of enemies and obstacles it faces - internally and externally - the demise of the IS is a matter of when, not if.

However, Kurdish independence may also be a matter of time. Prior to his interview with the BBC, Barzani also told CNN of his desire to hold a referendum, and told U.S. Secretary of State John Kerry that it was "very difficult" to imagine Iraq staying together.

Whatever external pressures Barzani will face to drop such a vote, doing so would cause a serious backlash among his own people. As such, there may already be too much momentum to change course.

In any case, the actions and statements of the Kurdistan Regional Government (KRG) suggest that it is preparing to go it alone. Iraqi Kurds have seized on fighting between Sunni militants and the Iraqi army by expanding their territory by as much as 40 percent, including oil-rich Kirkuk, which Kurds consider their historic capital. The KRG is refusing requests to help the Iraqi army recapture territory lost to militants.

Furthermore, Kurdish MPs have shown disinterest in helping to form a unity government in Baghdad, walking out of a parliamentary session on Tuesday that was meant to discuss the issue. The Kurds have also yet to nominate a president for Iraq. The KRG has recently started bypassing the central government when selling oil, much to the fury of Baghdad, which says such unilateral actions are illegal and unconstitutional.

The KRG has unveiled plans to increase oil exports eight-fold by the end of 2015, including pumping oil from newly-conquered territory. It has dismissed Baghdad's request for arbitration with the International Chamber of Commerce.

However, the fate of an independent Kurdistan may be decided more by its neighbours than by the ballot box. The only country in the region that has expressed support for this is Israel, which has recently started taking delivery of Kurdish oil. Just three days before Barzani's announcement of a planned referendum, Israeli Prime Minister Benjamin Netanyahu said "we should... support the Kurdish aspiration for independence." This is likely to harm such prospects, as it will heighten existing regional concerns and suspicions.

Arabs, Iranians and Turks are generally hostile to the idea of a Kurdish state, because besides dividing Iraq, it could raise secessionist sentiments among the Kurds of Turkey (some 20 percent of the population), Syria (10-15 percent) and Iran (7-10 percent). They are also generally hostile to Israel, so the prospect of a likely Israeli-Kurdish alliance is fiercely opposed, particularly by Arab states and Iran. The KRG may be wishing Israel had kept its mouth shut.

Of its neighbours, Syria arguably has the most to fear from an independent Kurdistan in terms of its own territorial integrity, since Syrian Kurds already enjoy de facto autonomy in the northeast as a result of the country's civil war. Damascus, Ankara and Tehran will be weary of a potential domino effect starting in Iraq. Opposition to Kurdish independence transcends the current divisions in Syria and Iraq. Of Iraqi Kurdistan's neighbours, Turkey arguably has the most influence on whether independence will be realised and whether it can succeed. The historically antagonistic relationship has flourished in recent years.

Turkey - an economic lifeline for the landlocked Iraqi Kurds, and a gateway to Europe - has invested heavily in their economy. "Turkish brands dominate the Kurdish region's consumer market," wrote the Wall Street Journal. Turkish exports to the KRG "make up the bulk of its total trade with Iraq, which surged to a record $12 billion last year, ranking second only to Germany." Multi-billion-dollar oil and gas deals were signed in November, and this year - despite Baghdad's objections - Ankara started allowing Iraqi Kurds to pump oil to a Turkish port for export. On the security front, Iraqi Kurdistan forms a buffer against Iraqi militants and refugees. "Turkey now looks at that KRG as its economic hinterland rather than a security challenge," said Sinan Ulgen, chairman of the Center for the Study of Economics and Policy, an Istanbul-based think tank. "There seems to be an understanding that has developed in Ankara in recent years that this relationship is unavoidable and beneficial between Turkey and the KRG," added Ulgen, a former Turkish diplomat.

This burgeoning relationship has led to speculation that Ankara may drop or soften its traditional opposition to Iraqi Kurdish independence. However, a Turkish government official was unequivocal on Monday that this would not be the case. "Turkey's position is for the territorial integrity and political unity of Iraq, that's it," the official said. We "are not in favour of any independence. That would be detrimental to that unity. Nothing like that could be discussed." Similar sentiments were expressed by Deputy Prime Minister Bulent Arinc that same day.

Ironically, while Turkey has historically opposed Iraqi Kurdistan's independence, the former is to a large extent responsible for the prosperity of the latter, to the extent that it is at the cusp of statehood.

However, both sides need to tread carefully at this critical juncture, given the mutual importance and benefit of their strengthening ties. The size of Turkey's Kurdish population makes it an influential electoral bloc. This will be a consideration for Turkish politicians as their country's first direct presidential elections - due in August - may coincide with Iraqi Kurdistan's referendum.

Prime Minister Recep Tayyip Erdogan secured the candidacy for the ruling AK Party last week. However, while Turkey's Kurds would applaud an acceptance of - if not support for - an independent Iraqi Kurdistan, they may not want to overplay their electoral hand in the service of their ethnic kin across the border.

It was reported last week that the Turkish government plans to present to parliament a reform bill to advance its peace process with Kurdish militants. "Erdogan has invested significant political capital in peace efforts, boosting cultural and language rights at the risk of alienating some of his grassroots support,"

Reuters reported. As such, Turkish Kurds may be weary of jeopardising their improving situation by pushing too hard with regard to Iraqi Kurdistan, or even their own status. Besides Turkey, Iraqi Kurds owe their relative stability and prosperity to U.S. policy on Iraq since the 1991 Gulf War. However, the U.S. has expressed a clear preference for "a stable, sovereign and unified Iraq." Kerry visited Barzani last week to urge Kurdish support for, and participation in, an inclusive government in Baghdad.

As such, the KRG president is stuck between a rock and a hard place: a choice between placating his own people, or Kurdistan's neighbours and allies. Achieving both does not look possible. The choice becomes starker and more difficult when it comes to Kirkuk, which is hotly contested between Arabs, Kurds and Turkmen.

The KRG portrayed its capture of the city as an attempt to fill the security vacuum left by the withdrawal of the Iraqi army in the face of the Sunni militant advance. However, the KRG has since insisted that Kirkuk will remain in its hands, and be included in the referendum. This will be hugely popular among Kurds, but has already led to increased tensions with Arabs and Turkmen, some of whom are taking up arms.

An independent Iraqi Kurdistan is regionally opposed, but its acceptance - however reluctant - is not beyond the realm of possibility. There is also the question of whether opponents would - or could - react beyond condemnatory statements, while eventually succumbing to realpolitik.

The incorporation of Kirkuk, however, may be a stretch too far, and could lead to a war as wide-reaching and destabilising as the one taking place today. It may not be long before we find out.