The Macedonian revolts: a dangerous development 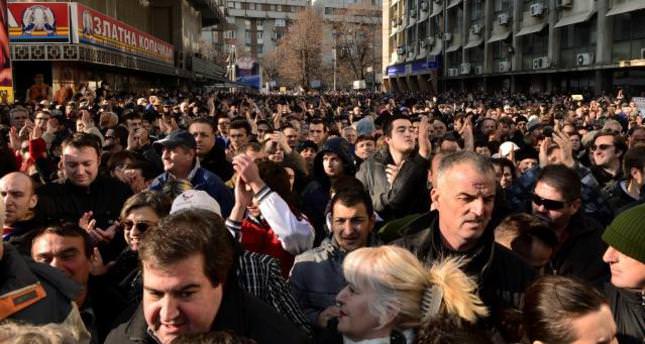 by Nedim Emin Jul 16, 2014 12:00 am
Last weekend, large crowds took to the streets of Skopje to protest a Macedonian court's decision to hand down life sentences to six individuals of Albanian origin. The protests revealed that the delicate balance of power between various ethnic groups is hanging by a thread. Meanwhile, clashes between demonstrators and security forces resulted in injuries and mass arrests, as participants objected to a number of practices.

Noting that they did not recognize the court decision, the masses accused Prime Minister Nikola Gruevski of implementing nationalist policies. The Albanian minority, however, also targeted the Democratic Union of Integration (DUI), a coalition partner and successor of the Kosovo Liberation Army (KLA), a guerilla organization which clashed with Macedonians during the 2001 insurgency. The Albanian community maintains that Gruevski, whom they perceive as an ultra-nationalist politician, seeks to eliminate the influence of the Albanian members of his administration.

As such, many Albanians today believe that the DUI falls short of protecting their rights adequately. The developments give rise to increasingly harsh criticism that there is a growing gap between the Albanian community's demands and the narrow channels of political representation in the country.

The demonstrations in various Macedonian cities mobilized Albanians as a Macedonian court sentenced six Albanians to life in prison for the murder of five Macedonians despite a lack of concrete evidence. The main reason that disagreement with the court ruling evolved into a full-blown uprising, however, was that the Albanian community have grown distrustful of the criminal justice system and government institutions in recent years. The intense rhetoric of Macedonian nationalism and the government's discrimination against Albanians under Prime Minister Nikola Gruevski continue to erode the Albanian community's confidence in the state. Furthermore, there is widespread concern that Prime Minister Gruevski's government seeks to slow down the ongoing process to grant broader minority rights to the Albanian community and to facilitate the country's domination by ethnic Macedonians. As such, the most recent wave of anti-government protests do not merely represent a popular reaction to a controversial court decision but indicate that the grievances which accumulated over the years have become explosive.

The revolts also attest to the widespread frustration among ethnic Albanians that the DUI, which they have steadily supported since 2002, failed to formulate an adequate response to the political maneuvering of Prime Minister Gruevski. Often accused of turning a blind eye to the Albanian community's discontent and sensitivities, the DUI leadership's passive stance on a number of issues paves the way for a crisis of representation for its supporters. This situation, in turn, makes it more likely for the underrepresented groups to voice their demands through violent means.

Although the ethnically-motivated insurgency of 2001, when Macedonians clashed with Albanians, ended with dialogue, the underlying elements of the event remain largely intact. The Ohrid Framework Agreement, which sought to guarantee the rights of all minorities, alleviated ethnic tensions to some extent, but these steps proved inadequate to persuade citizens to operate within the country's multi-ethnic order. It takes a lengthy and trying process, after all, for a country to heal the wounds of ethnic conflict. Addressing such explosions, therefore, inevitably requires a sign of sincerety from the authorities regarding peace between various ethnic groups as well as concrete practices rather than formal agreements. Left untreated and ignored, ethnic problems have the potential to place the country's stability at risk and to cause even more serious troubles down the road.

The current crisis in Macedonia is directly related to Prime Minister Gruevski's growing influence over the nation's politics and bureaucracy as well as his ever-apparent lack of interest in the Albanian community's demands. What distinguished the most recent confrontation from its predecessors, however, is that the general population now perceives that the Albanian political elite is no longer able to respond to the Prime Minister's challenges - which, to some degree, is reminiscent of the early stages of the 2001 ethnic crisis. At the time, violent clashes had shaken the legitimacy of Albanian political parties among the people and the Albanian community turned to extraparliamentary methods in pursuit of their rights. Even if the conditions today are entirely different, in order to avoid a similar crisis, the Gruevski administration and the DUI leadership must reassess the factors at play and revisit some of their current positions.