A Tale of Two Coups 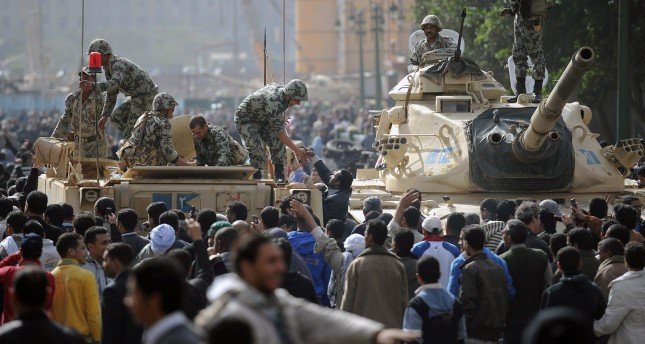 by Islam Abdel-Rahman Jul 24, 2014 12:00 am
"There is no justification for this military coup." This is a quotation from the statement released by U.S. Secretary of State John Kerry, a few hours after the Thai military forces seized power in Thailand following six months of political turmoil. The same statement expressed concern about detained political figures, shutting down of military outlets and suspending the constitution stating that such a coup will have negative implications for the U.S.-Thai relationship, especially for relationship with the Thai military. Finally the statement ended with the notion that all the military and other assistance and engagements with Thailand will be reviewed according to U.S. law. Within a few weeks, the U.S. coupled words with actions by cutting half of its military aid to Thailand, along with threats to moving one of the largest military exercises, Cobra Gold, to another country in the region. These steps came despite the fact that the Thai military did not yet perpetrate mass murders or initiate a wide scale crackdown with tens of thousands in dungeon-style prisons. The U.S. reaction can be understood as U.S. law indeed requires suspension of aid to countries that suffer coups, and the Thai military action, aside from what led to it, was a clear coup. But this leads us to recall another tale of coups under the same administration and the same secretary of state, this time in Egypt.

Despite the Egyptian military seizure of power, arresting main political figures, shutting down media outlets, and suspending the constitution, the Obama administration refused to call what happened a military coup, a stance that continues today. In the year that followed the military coup in Egypt, the country has witnessed the worst authoritarian regime ever in its modern history. At the beginning, the U.S. asked all political forces to refrain from violence, as what happens is a quarrel between two equal forces, not an assault of a full-armed military force over a peaceful anti-coup movement. With every step the Obama administration took to condemn the situation in Egypt, it took two steps backwards backing the junta regime in Egypt. By refusing to name a typical coup, so, the administration left the door open to keep the aid flowing towards Cairo. Yet, with the deterioration of the situation in Cairo, the administration froze part of the aid conditioning its resumption. However such steps seemed to be cosmetic ones to save the face of the administration with no intention to exercise real pressure on the military in Egypt, which was so clear in the voice leak of el-Sissi where he said that the Americans are keen on the restoration of aid to the Egyptian military and they have only to deal with some legal issues with the congress. Yet, despite these soft steps from Washington, it fully endorsed the military road map and praised their intentions. Nothing can be a proof of this more than the behavior of the same official who severely condemned the Thai coup, John Kerry.

Starting with his Orwellian comment that the military in Egypt is restoring democracy, Kerry showed the endorsement of the administration for the coup and its consequences. This was followed by a direct attack on the main opponent to the coup, the Muslim Brotherhood, accusing them of stealing the revolution, which signaled the approval of the bloody crackdown the military exercised against the brotherhood. The visits of Kerry to Cairo, on the eve of the kangaroo trial of the elected President Mohammed Morsi, were repeated on the eve of the trial of Aljazeera journalists.
The U.S. couldn't last long in its cosmetic trials and released all the aid it had frozen before. Yes, there were many concerns, reservations, and displeasures in the different American statements but none have been translated into policy, which was translated by many Egyptians as a diplomatic bluff.

The EU stance was no different than that of the U.S. Despite the concerns, condemnations, and reservations expressed, business went as usual between Europe and the military regime in Egypt. While EU suspended all official visits to and from Thailand, along with halting trade agreement with Bangkok, we found Catharine Ashton choosing Egypt to spend her summer vacation ignoring the thousands of mothers and wives who were mourning their killed sons and husbands. The EU which considered the Thai coup a blow to democracy, hailed the Sissi presidential bid as courageous.

You would be mistaken if you conclude that the goal of this article is to prove that the West is a hypocrite and the use of bright banners as democracy promotion just to gain or maintain its interests. This is something that has been proven time after time especially in the Middle East. What is different this time is with a region in a phase of remaking; this opportunistic policy may not just affect the credibility, but may threaten the interests that were meant to preserve such policy. It is something which will be known and to what extent in the following months or years.

* Member of the Foreign Relations Committee of Freedom and Justice Party, Egypt