Deadlock in Nagorno-Karabakh undermines Armenian national security in the Caucasus 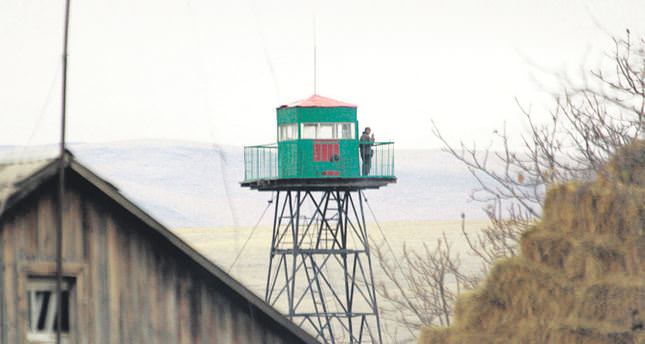 by Eşref Yalınkılıçlı Jul 31, 2014 12:00 am
The Southern Caucasus basin might be said to have constituted one of the "regional security complexes" in post-Cold War era politics. In this sense, the national security of the three independent post-Soviet republics of Armenia, Azerbaijan and Georgia are embedded in each other by their geography. Since Armenia occupied the Nagorno-Karabakh Autonomous Oblast of Azerbaijan SSR in between 1992 and 1994, peace and stability in the Caucasus have been the most needed values, particularly when the region came to prominence once again as the main battleground of great power politics soon after the sudden collapse of the Soviet Union.

However, Russia's reluctance to solve the Nagorno-Karabakh problem also creates some pressures on regional security, from which Armenia, foremost, is heavily influenced in terms of its realpolitik, although the Armenian state does not have a territorial connection with the Russian Federation anymore. Therefore, Russia's use of the long frozen conflict in Nagorno-Karabakh in order to maintain the status quo in the South Caucasus endangers Armenian national security the most over the course of time.

Seemingly, as much as this problem has been left unresolved, Armenian security sectors will continue to be affected negatively, hereby the whole regional security complex of the Southern Caucasus will collapse sooner or later. Hence, the post-Soviet Caucasian republics, most notably Armenia, will remain as an object of the great power politics in the international arena. As will be remembered, the likelihood of war and conflict was tragically witnessed in Georgia when Russia attempted at a military campaign in South Ossetia and Abkhazia in August 2008 upon Georgia's warming relations with the U.S., which then had a potential to change the balance of power in reverse of Russian interests in the region.

Regarding the Armenian geopolitical situation in the Southern Caucasus, military conflict should not be kept away from our strategic calculations as well. Contrary to its geopolitical raison d'etre, Armenia's foreign relations in the region are very paradoxical and its position vis-a-vis Azerbaijan and Turkey jeopardizes not only its own national security, but also the collective security of the Caucasus, where the small post-Soviet states have no luxury to fight unilaterally against each other. The same criterion is also valid for Azerbaijan and Georgia, so they should always cooperate so as not to engage in conflicts at any cost considering all the issues for the sake of the regional security complex of their geopolitics.

At the present stage, Armenia and Azerbaijan perceive themselves as sworn enemies due to the Nagorno-Karabakh issue and continue to mobilize against each other. Needless to say, Azerbaijan is by far the champion of this armament race with the help of its oil and gas revenues and further triggers Armenia's security dilemma day by day. In return, the Yerevan leadership has invited more Russian military supplies and deployment in Armenian territory, which is also annoying Azerbaijan, Georgia and Turkey. Russian deployment to the 102nd military base in Gyumri can be regarded as a source of distrust, with this understanding, between the parties, and Armenia's membership in the Collective Security Treaty Organization always worries Azerbaijan and Georgia, the two former Soviet republics that are opposed to any kind of military or political association with Russia as a necessity of their post-Soviet independence and sovereignty.

Because of the Nagorno-Karabakh problem, landlocked Armenia has become very isolated inbetween Turkey and Azerbaijan when both countries closed their borders to Armenia since the conflict erupted during and soon after the disintegration of the Soviet Union. Since independence, Armenia has tried to balance the Turkish-Azeri axis through Russo-Persian financial-economic support, but the country has become an economic backyard for both countries with overwhelming economic dependency.

Hence, Armenia's economic dependency, particularly on Russia in terms of infrastructure, energy and military, asymmetrically caused the loss of its economic independence. As the massive international blockage over Iran has also been considered, Armenia has no option other than mending its relations, especially with Turkey, in order to open up to the Western world.

Also because of the Nagorno-Karabakh dispute, Armenia has been bypassed by the energy corridor, even though it exists in the middle of the energyrich Trans-Caspian-Caucasus route. In this regard, Armenia missed a historic economic opportunity when the Baku-Tbilisi-Ceyhan Pipeline Project was inaugurated in 2006. Instead of Armenia, Georgiahas taken the advantages of pipeline politics and intensely improved its political and commercial relations with Turkey after the fall of the Shevardnadze regime during the Rose Revolution in November 2003. In brief, Armenia could not have used its chance in the New Great Game of geopolitics that has institutionalized a new-born Turkish-Georgian-Azerbaijani partnership while exempting Yerevan from the blessings of cooperation.

In addition, this problem not only triggers a military security dilemma between Azerbaijan and Armenia, but has also caused some sharp declines in the Armenian population and accelerated massive labor migration flows out of the country in the wake of economic underdevelopment. Many young Armenians have recently left the country, more often to Russia and Europe and to some extent Turkey, in order to find employment and sustain their livelihoods.

In this context, Armenian societal security is also alarming and this situation frequently enhances non-security threats like cross-border problems, smuggling, human and arms trafficking and other organized crimes originating from the Armenian border and spreading through Russia, Turkey and continental Europe. We can augment the numbers and facts that constitute the main sources of political-military tension, discontent and disarray in Armenian politics presently.

In brief, the current trend of Armenian foreign policy always creates some problems and continues to undermine the military capacity of the country in the Caucasus. Besides that, its domestic politics have been nurtured by the catastrophic environment in which the 'otherization' of Azerbaijan and Turkey is generating the backbone of ethno-centric Armenian statehood and populist nationalism. Allegedly, all of these problems that the Armenian public faces are today somehow related, directly or indirectly, with the long frozen and unresolved conflict of Nagorno-Karabakh.

Therefore, the main question comes to mind immediately regarding Armenia's anti-realpolitik attitudes toward its geopolitical and geo-economic existence within the clear borders of Southern Caucasia. It is very questionable whether Armenia will be able to stand (or not) by maintaining its current foreign policy, which might be said to have been settled redundantly on a frozen conflict in the post-Soviet era. But its unilateral pro-Russian stance obviously poses challenges to its national and then to regional and international security in the long run. Thus, from a realist point of view, one can easily understand how a region's security is sacrificed through an irrational insistence on deadlock considering the most emergent political problem that is waiting to be solved for the sake of a Caucasian peace process.

It might be said that the Organization for Security and Co-operation in Eu rope Minsk Group has so far remained very insufficient in conflict resolution and peace-making initiatives concerning the Nagorno-Karabakh issue. Russia, France and the U.S. cannot pass beyond their-own geopolitical agendas concerning the Caucasus conundrum that renders Armenia and Azerbaijan as the perpetual belligerents in the basin. Especially Russia's pro-Armenian reserves paradoxically damage Armenia and its integration with the coterminous peoples and states as if the Russo-Armenian military partnership is perceived of as being favor of Armenia in the current stage.

Thereupon, a possible Turkish-Armenian rapprochement in the future could be a political panacea for the Armenian predicament caused by the aforementioned side effects of the Nagorno-Karabakh conflict. Turkey seems to have the ability to mediate between Armenia and Azerbaijan if some conditions are fulfilled by the parties, particularly during the centenary anniversary of the Armenian incidents in the coming year. In this respect, Turkey's recent endeavors led-by President Gül, Prime Minister Erdoğan and Foreign Minister Davutoğlu regarding bilateral relations with Armenia should be considered by Armenian President Serzh Sargsyan as an indicator of goodwill and regional diplomacy.

Besides, Erdoğan's latest official condolences on the mass deportation of Ottoman Armenians during World War I can also be thought of as Turkey's eagerness to build up a prospective Turkish-Armenian dialogue and mutual trust that will be able to melt the current hostile relations between Armenia and Azerbaijan in Caucasia.