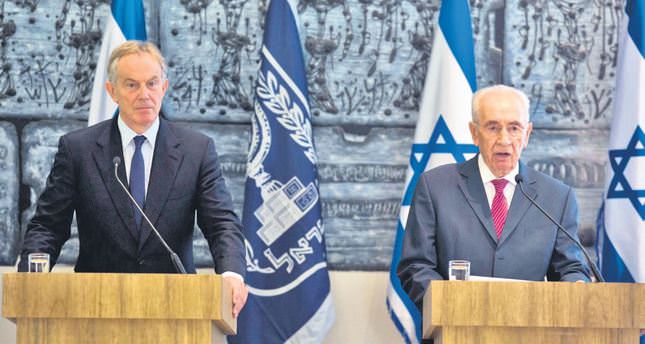 by Martin Jay Aug 02, 2014 12:00 am
Arabian despots don't generally resign. It's just not what they do. But neither these days do Western leaders, even when the evidence that parodies their decisions is overwhelming. But when Mr. Erdoğan becomes president of Turkey and takes on the role of a regional power broker, one of his first tasks might be to tackle the Middle East's most dangerous dictator who has caused more bloodshed and mayhem through his own self-obsession than any other: Tony Blair.

Pressure is starting to mount on the former British prime minister, who led the U.K. into war in Iraq, to resign from his prestigious position as the ambiguously titled "Middle East Envoy." Blair is currently facing a torrent of vitriol from an impressive list of names including his former ambassador to Iran, Sir Richard Dalton and former London Mayor Ken Livingstone, over his preposterous statements that attempt to absolve himself from the carnage and calamity of the events in Iraq today. Is there anyone who can give even a faintly impressive argument that asserts that the invasion of Iraq has led to today's chaos?

Only Tony Blair. Or at least only Blair even tries. Even now Blair continues to shock us, but this time by his brazen delusion of his own abilities. You can't blame him though, as his global business ventures – shrouded in secrecy – must take away the sting of the tsunami of condemnation for Iraq. Blair is making a mint around the world in various capacities, even in the Middle East, and that alone should be enough to resign his position, which he can't possibly believe he can retain and stay objective to the troubles of the region. Can he?

Recently, Mr. Erdoğan, who we know has big plans to expand Turkey's influence in the region, threatened to break relations with Israel over its attacks on Gaza in recent days, which continue to shock us. But asking for Blair's resignation as the official envoy of the Quartet on the Middle East would be a prudent tactic as a token of his seriousness. As, remarkably, we see wide scale condemnation of Blair of all sundries except regional leaders. Blair's "appalled" comment speaks volumes about where he stands on Israel and the Palestinians. But an expendable forced resignation might be the token diplomatic nugget that all sides would both trade and acknowledge.

The madness of Israel's aggression, which appears to have been endorsed both by France and Germany, is also being endorsed by an "appalled" Blair. What perhaps is more appalling is Mr. Blair's unparalleled ignorance of the Middle East. Will Turkey stand by and watch this operator continue with his shuttle diplomacy, while expanding his own businesses in the region as well?

Wasn't fighting corruption the heart of the Arab Spring and what is the very core of Iraq's problems today? Or in other words, can anyone find any real difference with the selfish ideologies of Iraq's prime minister and those of the former British one?

Iraq is the product of Blair's ignorance and vanity. The indictment published by U.K. newspapers continues with its stinging rebuttal of Blair's unparalleled legacy and accuses him flat out of being responsible, or more or less bringing, al-Qaida groups to Iraq. "In the wake of recent events it is a cruel irony for the people of Iraq that perhaps the invasion's most enduring legacy has been the rise of fundamentalist terrorism in a land where none existed previously. We believe that Mr. Blair, as a vociferous advocate of the invasion, must accept a degree of responsibility for its consequences," the letter reads.

The former prime minister's business interests also came under fire for being dubious at best; the letter alleges that his "conduct in his private pursuits also calls into question his suitability for the role" with reference to his lack of transparency in the way he organizes his personal finances. The letter accuses him of "blurring the lines between his public position as envoy and his private roles at Tony Blair Associates and the investment bank JPMorgan Chase."

But it's his patent lack of objectivity that is the main point for many. Sir Oliver Miles, former U.K. ambassador to Libya, lashed out at Blair in the letter calling him the "wrong man in the wrong job. The wrong man because he is identified with the war in Iraq; criticism has concentrated on his misreading of intelligence and his lies, but equally important was his failure to plan for the peace, with the result we see today" he said. "The wrong job because patching up the Palestine economy sounds good but avoids the real issue," he added, "the repression and misery of the occupation; that is what the quartet should tackle. Seven years on it's time to blow the whistle." Former top diplomat Sir Richard Dalton is also one of the signatories of the letter which stabs Blair in the back in one U.K. newspaper. Mr. Blunt said, "It's time to end Tony Blair's personal Calvary as quartet envoy following his disastrous statesmanship in office on the Middle East. His role as envoy was neutered politically almost as soon as it began, and is now a distraction from the increasingly desperate need for a comprehensive peace deal."

And more recently there is news that he has been in talks with the new el-Sissi government in Egypt. That coupled with business deals in Abu Dhabi should be enough on its own for him to throw in the towel. But there's more. Where is our "envoy" when Israel launches a massive series of airstrikes against Palestinians in the Gaza Strip? Taking sides of course with the Israelis! How else could you explain the statements on the Quartet of the Middle East website that publishes his monologues that detail how "appalled" he is at the Israeli teenagers' kidnapping. Surely this is not the role of a mediator to sympathize with one side when the very essence of the job is to remain neutral and mediate.

And where was he when a few days ago the death toll in Gaza reached 1,000? He was throwing a lavish birthday party for his wife at their country
retreat in leafy Buckinghamshire with none other than Lord Levy – a Labour member in the House of Lords and a friend – in attendance.

Blair is supposed to play the role of a U.N. peace broker but no one seems to be taking this job remotely seriously – least of all Blair himself. Chastised by the British press, he spent most of the week in the U.K. before hosting the couple's friends at the party. He held the surprise 60th birthday party for his wife at their country mansion, South Pavilions, formerly the home of Sir John Gielgud, inviting 150 of their closest friends, which included former New Labour ministers, as well as wealthy businessmen and TV celebrities.

While children in Gaza were being bombed in U.N. safe havens, Blair hired glamorous dance couple Kristina Rihanoff and Ian Waite from BBC's "Strictly Come Dancing," who danced for them after dinner to the Stevie Wonder classic "My Cherie Amour." Comedian Bobby Davro was also hired to entertain, doing an impersonation of Mr. Blair, and singing the song, "If I Ruled the World." But Blair didn't even need to hold it during July. His unexpected birthday party was criticized last night, with some saying he could have held it later, as his wife's actual birthday is not until Sept. 23.
One source said, "He should be in the Middle East, not in the UK."

He seems to glide about various locations in the world like a retired school teacher unfazed by time. Recently, Blair, 61, gave a talk on New Labour at the think tank Progress in Westminster. He even managed a one-day visit to China during the week and made it back to the U.K. in time for his wife's celebrations.

However, other world leaders, such as U.S. Secretary of State John Kerry and the U.N.'s Ban Ki-moon, flew to Jerusalem to pressure Israelis and Palestinians to agree to a long-term cease-fire. Mr. Blair is normally based in Jerusalem, as his Office of the Peace Envoy for the Quartet – the U.S., EU, Russia and the U.N. – is at the King David Hotel. World leaders, led by Mr. Kerry, held urgent talks in Paris this week to pressure both sides to turn the cease-fire into an extended truce. Mr. Blair was not at the talks, prompting dismay from a few Western commentators, but none from the region.

The problem though is one of culture. In this region of the world, we have come to respect graft and those who manipulate it for their own good. But how can we ever expect any progress on governance and democracy in the Middle East, when someone of Blair's stature manages to pull off the ultimate scam and set such a bad, or, er, good example? Blair's position as a diplomatic envoy is simply wrong, as his credibility is in tatters. He claims he is not taking any money from President Sissi in Egypt – the very leader who has blocked the tunnels to Gaza's desperate population (due to him disliking Gaza's link with the Muslim Brotherhood). This is already affecting the conflict. And Tony Blair is his advisor. Hands up anyone who believes Tony!

* The Middle East correspondent for Deutche Welle TV and often reports for the British weekly The Mail on Sunday, lives in Beirut @MartinRJay