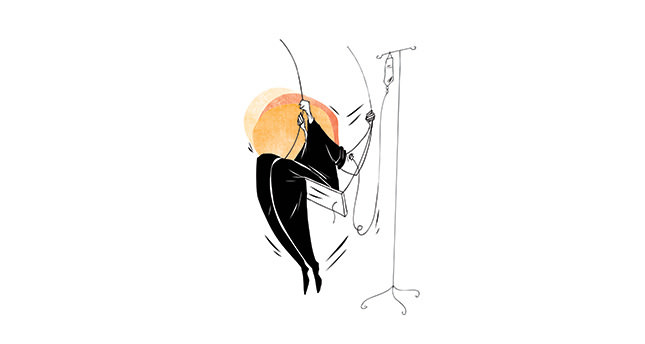 by Bünyamin Esen Aug 08, 2014 12:00 am
Prime Minister and Justice and Development Party (AK Party) presidential candidate Recep Tayyip Erdoğan recently presented his presidential vision document at a well-organized meeting in Istanbul. Correlating with the first-time direct election of the president, with this historical document a presidential candidate described his political vision and commitments before heading to the office for the first time in the country's history. Erdoğan is not only pointing out his presidential campaign commitments, but also drawing a retrospective of the recent decade of the country under the AK Party government, and expressing what kind of a "new Turkey" the country is heading towards if he is elected president.

The vision document has been discussed from different angles. Especially the political/democratization aspect and international relations of this strategic vision document have been extensively scrutinized in-depth by political analysts. But, as usual, the social welfare aspect of the document is largely being undervalued, or subjected to superficial analyses. This article aims to clarify connotations and analyze explicit and implicit context of Erdoğan's presidential vision document.

The assertive aim of transforming Turkey into a mature welfare model

"The Welfare Society" part of the Erdoğan presidential vision document consists of three consecutive sub-headings: "Social welfare," "Economic welfare" and "Local governance and environment." The economic welfare section is mainly concerned with the development of the country's various sectors. On the other hand, the social welfare and local governance and administration sections cover a wide range of social policy issues from healthcare services to housing policy.

Initially, the "Social welfare" section of the vision document starts with defining the improvements in Turkey's welfare regime over the last twelve years. It has to be mentioned that Erdoğan is standing at a confident point on presenting what AK Party governments have achieved including the series of reforms in the educational system, the allocation of the highest share of the government budget into educational services, expansions in higher education institutions from 76 to 175 universities, significant improvements in healthcare services that give a chance to welfare recipients to choose their welfare provider – both public and private, raising the social assistance budget 15 times when compared to 2002, expansion of the social security scope and implementing comprehensive social security reform. The list contains several reform programs that can all be defined as revolutionary in their policy fields.

The section of the document regarding local governance and environmental issues emphasizes the importance of improving the quality of life for large sections of society, especially in urban areas. In this regard, Erdoğan underscores that the Housing Development Administration of the country has constructed 565,000 public houses in the recent decade and has started the transformation of 6.5 million houses across the country under the comprehensive "urban transformation program" with the goal of strengthening buildings against possible earthquakes.

Commitment on keeping up the welfare expansion trend

In his vision document, Erdoğan is clearly showing a strong commitment to protecting the path of the last decade of social welfare policies. From social security and education to labor market policies and social assistance mechanisms, he is offering a front for those who are satisfied with the services so far.

The vision document is clearly formed to protect the significant gains of the last decade. It defends the improvements in healthcare services, education, social assistance mechanisms and other substantial policy areas.

As an important aspect, the vision document has a clear emphasis on pro-family policies and commits to pursue pro-family policy tools. This commitment explicitly indicates that the Ministry of Family and Social Affairs, which was established in 2011, will be in a more dominant position regarding the implementation and decision-making of Turkey's welfare policies in the near future.

As an interesting note, the document explicitly mentions that recent policies have doubled adoption figures in the country and childcare facilities for those who are in need of protection under the name "compassion houses," have been increased 15-fold. The document emphasizes the commitment to strengthen the family's central role in welfare policies.

Although the document discusses in an abstract, even vague, manner, a determination for improving women's status in society both in the private and public spheres. In this regard, the dissolution of the public ban on headscarves constitutes a great step in the aim of abolishing obstacles for women's participation in society. The document also refers to the "zero tolerance for domestic violence against women" policy as a red line for the administration.

What does the vision?

The main deficiency in the vision document is that it fails to cover the problematic issues of occupational health and safety in Turkey's various industrial sectors. As a country with 70,000 industrial injuries annually (approx. 2,000 of them fatal), Turkey has a significant challenge ahead for securing sustainable growth. This is also a necessity for constructing a balance between the country's industrial production patterns and a fair labor market. The huge size of the problem creates a serious gap in Turkey's labor market policies and constitutes a great threat for the prospect of a "new Turkey." The vision document does not cover a substantial mega-plan to eradicate occupational accidents in the country.

Secondly, the vision document does not explicitly clarify the problems and mechanisms of reforming the welfare society. The world is in a phase of using welfare policies in order to depart from the classical welfare state model to move toward a more diverse welfare model – to the so-called "welfare-mix." This new welfare model incorporates not only public and private sectors, but also NGOs, charities, religious organizations, academies and individuals in the provision, funding and improvement of welfare services. Field research and empirical evidence based social policy design is becoming more central in this bigger picture. In this sense, the vision does not seem to comprehend the complexity of welfare policies in today's globalized world.

Turkey has the lowest women's labor force participation rate among Organization for Economic Co-operation and Development (OECD) countries, with 29 percent. Visibility of women in social spaces and participation figures of women in decision-making mechanisms are also not promising. There is a significant deficiency in the vision document for defining exact and concrete policy tools for increasing women's economic and social participation.

Finally, the vision document does not completely accomplish analyzing the possible effects of the forthcoming demographic change in the country. Despite Erdoğan's recommendations for having more children per family and being a pioneer for the expansion of the younger population, these recommendations are helping just to postpone the demographic crash. It is not explicit in the document what kind of policy tools are being planned to cope with the forthcoming problem of the country becoming "an ageing society" in a couple of decades.

Shaping the welfare state in Turkey for the next decade

Erdoğan's presidential vision document is the first example in Turkey's history of a presidential candidate expressing his political vision and commitments before heading to the office. In this perspective, regardless of its content, it constitutes a historic step for the country. On the other hand, the content of this historic document is also extremely important in terms of resolving the codes of Turkey's near future, or the "new Turkey" as Erdoğan calls it.

In the area of welfare policies, Erdoğan's presidential vision document clearly emphasizes keeping up the pace of substantial reform and transformation policies. Expansion in welfare mechanisms and social assistance tools, the extension and diversification of social policy tools and increases in the quality of services are the main points in this ambitious document in terms of welfare policies. But still, the vision document needs to extend its content toward the structural problems of the country regarding welfare, such as occupational health and safety and demographic and social changes.

In conclusion, despite the significant advances in welfare policies in the recent decade, Turkey still has a long way to be branded as a "mature welfare state." In this bigger picture, Erdoğan, who is accepted as the front-runner in the presidential race by many political analysts, promises "to keep up the reform" in welfare policies, as well as many other areas, to Turkish citizens.