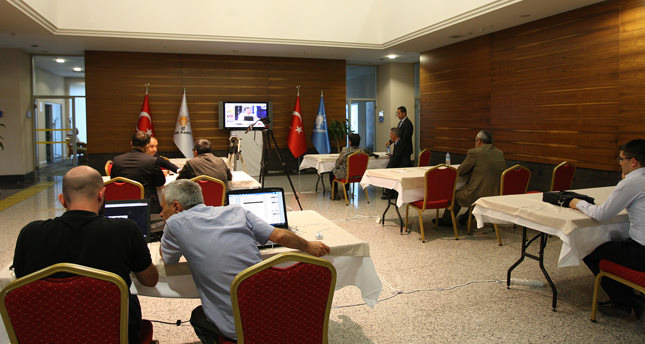 by Mehmet Köse Aug 11, 2014 12:00 am
The presidential election held this week is a turning point for Turkish democracy in many ways, not just because the president was elected directly by the people for the first time, but Turkish citizens living abroad as expats have also found chances to cast their votes. Overseas electorates have used their democratic rights in 103 polling stations in 54 countries all over the world alongside ballot boxes at 44 border gates in Turkey during this presidential election.

Social and economic developments, political stability, increasing democratic participation as well as an expanding diplomatic presence and a foreign policy dimension during the last decade paved the way to strengthen democracy. Domestic developments resulted in the shift of the government's policy change toward citizens living abroad as well. Today, the AK Party government is implementing more social, cultural and educational programs for the diaspora to execute the responsibility of the country. Providing an opportunity for the citizens living abroad to participate in the democratic process is also a critical issue, as it is one of the most important civic rights in their home country which has an influence and impact on their life and identity.

Unfortunately, during the first quarter of the migration process quite a large number of Turkish citizens could not participate in the election process unless they came back to their hometown prior to the election. Of course, the nature of migration was an important factor in this unpleasant situation.
The root cause of the migration at first hand was to work for a short period, save some money and come back. Social, cultural and political necessities were not on the table for all parties; migrants, host and home countries. Family reunions and extending the stay of labor migrants began to change the minds of both home and host countries and as such they adopted new policies.

Host countries started introducing new measures by pushing migrants to integrate or embrace voluntary assimilation while home countries initiated social, cultural and educational programs to preserve the identity of the emerging diaspora. Alongside the introduction of free elections after the end of the military regime in the 80s in Turkey, legislative change to allow overseas citizens to use political rights to cast their votes at the border gates can also be considered as a change of mind on Turkey's side.

The first voting experience of the diaspora has been just this week, after more legislative arrangements made in 2012 due to the cancellation of postal voting by the Constitutional Court and the unwillingness of the Supreme Election Council (YSK) to implement elections through the 2008 legislative act. Around half a million Turkish overseas voters out of the 2.8 million who registered enjoyed their first experience of the new democratic participation system.

However this figure has also brought some controversies, largely over the relatively low turnout. Some governments' insistence not to allow setting up more polling stations close to where people reside was one of the many criticisms. For example, hosting over 1.4 million registered voters, Germany permitted 7 polling stations only. In such cases, voters have been forced to travel hundreds of kilometers to cast their votes. YSK was also criticized for not increasing the number of ballot boxes close to where Turkish communities live in countries with the no permission problem. Beside these, the most controversial practice of the YSK has been to schedule an appointment system compulsory for most countries. Electoral legislation gives YSK the authority to oblige voters making appointments but gives exception where the number is too high to manage.

The Debate over the practices of overseas voting is important and emphasizes the behavior of host countries as well as mother country agencies in understanding the diaspora and it also makes government services more accessible for them in order to keep ties through generations. The efforts to increase voter turnout is not only an election issue but it is another step for preserving and improving the bond among diaspora members as well as between the diaspora and the mother country.

Democratic participation is also an opportunity for Turkey to establish links with Turkish citizens who left the country for political and cultural purposes many years ago, which means expanding the "democratic solution process" to the diaspora. Therefore, all the institutions of society and government agencies have the responsibility to honor the fact that as a country we may still talk about our diaspora many generations later.