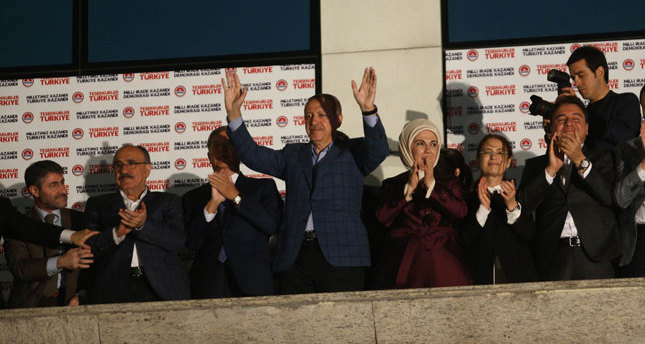 by Pınar Kandemir Aug 12, 2014 12:00 am
If you ask what the most remarkable moment of the meeting was when Prime Minister Recep Tayyip Erdoğan announced his candidacy for the country's first direct presidential election, I would say that it was how he finalized his speech. That day, Erdoğan completed his historical speech by reciting the meaning of Surah al-Fatiha, the first chapter of the Quran. By saying, "This is a beginning rather than a farewell!" That day, Erdoğan was basically saying the 12 year governance of the Justice and Development Party (AK Party) under his leadership was only the beginning, the first chapter of the story written by him. Erdoğan's presidency will be the second chapter of this book. While this was indeed good news for Erdoğan supporters, it was a nightmare for those fighting the anti-Erdoğan battle. And today, after his victory in the 2014 presidential election, we might say that this dream or nightmare, however it is perceived, has become a reality. The question now is it really a new beginning for Turkey?

When Erdoğan declared himself as the nominee for his party for the presidency, his strong campaign had already indicated that he would be the next president of the Turkish Republic. This was clear because he had a solid base of support within society at a national and local level. Now, as the new president of the Turkish Republic, what is most expected is that he will open a new chapter in Turkish history. Erdoğan, 60, has been in power for more than a decade now. He is the first elected politician to have stayed in power for consecutive terms by the will of the people. It is evident that Erdoğan is the most influential and crucial political figure in Turkish history since Mustafa Kemal Ataturk, founder of the Turkish Republic. But obviously, he was democratically chosen by the will of the people contrary to Ataturk's single party regime. That is the reason why Erdoğan has been called a political wizard by several political analysts. The rise in his support since the 2002 general elections has only proven this to be true.

When he was banned from office as the mayor of Istanbul and sentenced to a 10-month prison sentence for reciting a poem in 1997, he was giving the same message to his supporters in the speech he made: "This is not a farewell. As I have always said, I hope it is just a pause in a series of songs to be finished." He kept his promise years later while Turkish secularists were dreaming of his demise and eternal exit from the political platform. At that time, while his supporters were chanting, "Turkey is proud of you," Turkey's state-centric and secular newspaper, Hurriyet Daily, captioned "From now on, he cannot be even a headman (mukhtar)." Obviously, time has proven that it was the Turkish secular elites that were mistaken in their calculations, not Erdoğan. First he became the most popular prime minister in Turkish history, and now he is the president of Turkey. Erdoğan's prison experience was only an example of his struggle with the bureaucratic elites of Turkey, and it has not been the first time or the last time for him. Henceforth, he has described his journey with the following verses: "I'm on a long and narrow road, I walk all day and all night," from the lyrics of Aşık Veysel, a Turkish minstrel and poet. This song, also the inspiration for Erdoğan's presidential logo, became a metaphor for him to define his political journey since then. That is the reason Erdoğan constantly reminded his supporters of this song during his campaign: "As soon as I came into the world/At that moment I began walking/Through an inn with two doors/ I walk all day and all night."

By considering his long and thorny journey in politics, it might be said that Erdoğan's presidency will count as a victory not only for his supporters and himself, but also for the people who were always repressed by Kemalist elites. Although, the recipe of Erdoğan's rising success is quite complex, there is at least one hint that can be realized by anyone following him: his self-reformation. Erdoğan has changed, as has Turkish society. He learned how to transform his policies in parallel with the social change. He managed to provide true prescriptions to chronic problems as opposed to the main opposition party's deadlock in ideological blindness.

A new environment in politics?

Although the presidency was quite a powerful political position during the single party regime until 1946 under the rule of Atatürk and afterward, İnönü, its importance lessened following the first democratic election in 1950. Since the prime minister was directly voted upon and the president was selected by Parliament, the prime minister was always 'the powerful and effective one' not only in terms of political popularity but also in technical means. Atatürk and İnönü were the only exceptions since democracy did not exist in Turkey at the time of single-party rule.

Hence, the August 2014 presidential election is a first in Turkey's Republican history. Being the directly voted will, of course, brings new meaning to the political stature of the president. Since the legitimacy of the president will rise within society, the power of this position will automatically increase. Most probably, Erdoğan will not be an ordinary president; but it is very likely that he will maximize the power of his office as much as it is understood from his "a sweating president" definition. With this, Turkish politics will find itself in a remote environment, since it will literally change the balance between bureaucrats and politicians in favor of society. Yet, the presidency was always considered a position where the bureaucracy and secular elites could apply as a means to balance the civilian politicians in favor of the state, although there have been some exceptions in Turkish history in spite of the outcry of these ruling elites.

At the end of the day, the presidency was expected to be a fort that represents the secular and republican character of Kemalist Turkey against civilian politicians. Additionally, metaphorically speaking, the presidency was the last castle of Turkey's aggressive secularists against Islamists – according to them until Abdullah Gül's presidency in 2007. Considering the messages given by Erdoğan and AK Party politicians, a shift from a parliamentary system to a semi-presidential system seems possible. Here, it might be said that changing the role of the president is not only Erdoğan's preference. While the opposition parties' joint candidate Ekmeleddin İhsanoğlu had promised to keep the traditional role of the presidency if he was elected, people voted for Erdoğan rather than him. That means a large portion of Turkish voters confirmed their preference for Erdoğan's idea of an "active presidency."

As is known, the tension in Turkey is still quite high due to the remains of the Gezi Park protests and the Dec. 17 process; and it seems like it will continue in the same way for a while even after the presidential election. Erdoğan's victory is not a surprise for his supporters since they were already motivated with the "Vision 2023" campaign psychologically, which refers to the 100th anniversary of the Turkish Republic, and nor is it a surprise for the opposition parties, who thus far, have become used to being beaten in any election in which they compete with Erdoğan, due to their very cliché and desk-based strategies.

Now it is time to watch how the Turkish political system will change step by step. Enjoy witnessing this historical move!


* Pınar Kandemir is a Ph.D. Researcher at King's College London, University of London