Will US airstrikes save Iraq from the ISIS? 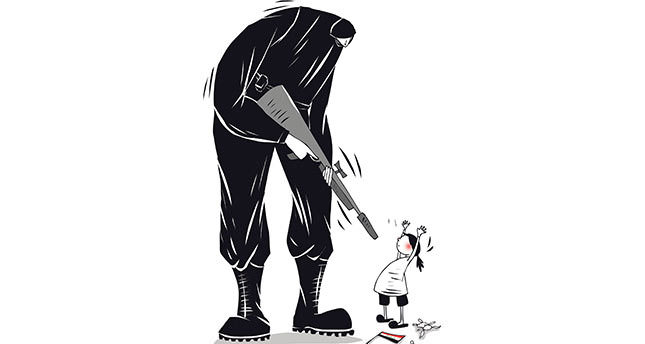 by Mehmet Çelik Aug 16, 2014 12:00 am
Recently, there have been a series of problems occurring in Iraq. Firstly, there is the political crisis that has, in fact, been an issue since the government formation of post-occupation. The political arena left to Prime Minister Nouri al-Maliki was not utilized to unite the Shiite Arabs, Sunni Arabs and Kurds. On the contrary, al-Maliki chose to consolidate power in his office in an authoritarian style, and used sectarian politics to further divide Iraq's political class, rather than establishing a unified force for state rebuilding with minority Sunnis and his fellow Shiites. Such a stance created anger and polarization against al-Maliki amongst the Iraqi population, regardless of their tribal or religious affiliation.

At the moment, al-Maliki's party, the Dawa Party, which is leading the coalition government, does not have enough seats to maintain its ruling status. Thus, the president, Fuad Masum, proposed an alternative candidate, Haider al-Abadi, also from al-Maliki's party. This, in fact, puts forward and reveals the political crisis and division within the Dawa Party. Despite the president's proposal of the alternative candidate, al-Maliki still maintains his stance that he is the prime minister of Iraq, and will protect his position even if he is required to use force. On the other hand, the U.S., Iran, and Saudi Arabia have declared their support for al-Abadi against al-Maliki. Such a political mess, of course, does not help the fact that the country now also has to deal with ISIS, the Islamic State Iraq and al-Sham. If utilized strategically, the threat of ISIS could have been used as a means to unite the political class in Iraq, and reconcile the political class with other social and political forces against the insurgency of ISIS. Of course, this was another missed opportunity for Iraq's project of state building that has been failing since the occupation, and al-Maliki is widely blamed for fostering an environment that has allowed the ISIS to seize control large parts of Iraqi territory.

The second crisis is, of course, the emergence of the ISIS as a fully developed insurgency in Northern Iraq. The growth of the ISIS group is not a newly developed idea, however, its increased impact and the threat it poses to masses in the region has emerged, relatively, as a more recent event. Although such a new development can be indirectly linked to the al-Maliki government's failure in managing the diversified social forces within Iraq, the birth of the ISIS is traced back to the rise of al-Qaida in Iraq, in 2003, against the American invasion with the coalition forces. Such a movement built on anti-Americanism, increased its diverse support base quickly, in a period when the U.S. was destroying Iraq. The new phenomena, born out of the old al-Qaida is also not a homogenous force, and has attracted foreigners and youth from diverse backgrounds.

The development of such atrocities and the threat ISIS poses to the region, and more superficially, the U.S. interest in the region, alarmed the Obama Administration's foreign policy advisors. On Friday, Aug. 8, Pentagon Press Secretary John Kirby tweeted confirmation about U.S. military intervention in Iraq against ISIS. "U.S. military aircraft conduct strike on ISIL artillery. Artillery was used against Kurdish forces defending Irbil, near U.S. personnel." Also, more military aid has been sent to Iraq, namely to the Kurds, to fight against ISIS rebels. One must remember that, during Iraq's occupation between 2003 and 2011, al-Qaida was hit hard by the U.S. military and had lost much of its effectiveness. However, the rise of ISIS showed that, even then, the U.S. had not wiped out the al-Qaida ideology in the complete sense. Thus, the repetition of such military strategy, and, in fact, this time without soldiers on the ground to combat against the rebels, should not raise any hope that it will save Iraq from ISIS rebels. Moreover, the idea that U.S. involvement is the solution to Iraq's problems and that it will bring an end to the threat of ISIS does not seem convincing, and it is an illusionary move.

The bombardment will bring damage to ISIS logistically and slow down their attacks on Iraqi civilians. But, it will also mean that the rebels will disappear for a period of time, wait for the events to be silenced and then reappear again. ISIS rebels are using old-fashioned guerrillas tactics, and thus, are hard to deal with using conventional military power such as aerial bombardment. One way to tackle the ISIS rebels is to utilize the Kurds against them. The Kurdish army, YPG, in Syria played a crucial role in the fight against ISIS. They were impactful in the fight-back as they were also trained by another terrorist organization, the PKK, the Worker's Party of Kurdistan, which has used ground-level guerrilla tactics since its creation in the early 1980's. However, such a scenario is not one that will bring a stable solution, as the PKK is a significant threat to Turkey since it claims large parts of Eastern Turkey as Kurdistan. Despite the significant problem that could arise with the inclusion of the PKK, the regional powers cannot simply dismiss the Kurds as a force in the fight against ISIS.

Alternatively, if the bombardment of Iraq by the U.S. airstrikes is not deemed as a solution to stop the ISIS rebels, then, regional powers such as Turkey, Iran, Qatar, Jordan and anti-Assad forces must coordinate their strategy if they do not desire the growth of ISIS and continuation of the threat it poses. Their disagreements over the Syrian crisis continues to keep them at arm's length with each other, and it essentially leaves room for continuous growth of ISIS rebels. In fact, their coordination over the Syrian crisis will close the roads for the Islamic State to capture more areas in Iraq. Otherwise, it is inevitable for ISIS to find an open corridor that will lead to Baghdad.

Thus, unless the alternatives to the airstrikes are brought forward, the solution and outcome will not be permanent but rather, it will be a temporary disappearance of the rebels until the events calm down (assuming they do). The instability of using terrorism as a form of governance in Iraq and the region will not benefit the people, and, in the long run, will only give way to more conflict in the region. U.S. foreign policy on regional issues must be revisited in order to provide sustainable solutions, and in particular, the nuclear talks with Iran should yield an opportunity to establish closer ties with Iran during this turmoil, which will benefit U.S. interests in the region in the long run, rather than damage it. Otherwise, in five years or so, another force will reappear claiming to be the new caliphate, and kill thousands of minorities in the region. On a side note, although ISIS claims to be the caliphate of the Islamic ummah, their actions and ideological formation are more suitable to define the nihilism of 19th century Europe that became the roots of the fascism. Furthermore, their institutional formation portrays itself as a modern construction, rather than how the caliphate is understood in its terms: linked to the Islamic empires throughout the history of the East.
Last Update: Aug 16, 2014 2:21 am
RELATED TOPICS