History is on the side of integration 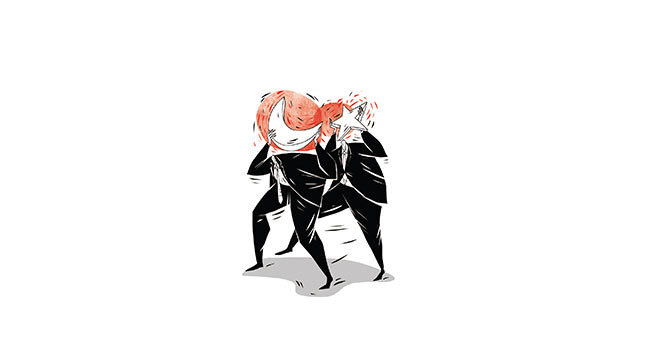 by Kurtuluş Tayiz Aug 22, 2014 12:00 am
All eyes were initially on Prime Minister Erdoğan, but as the results of the Aug. 10 election began to roll in, attention quickly shifted to HDP (Peoples' Democratic Party) candidate, Selahattin Demirtaş, who was able to double the number of votes received from the March 30 local elections. Demirtaş was predicted to receive no more than 8 percent of the vote, but he came very close to the 10 percent mark, which made his outcome the surprise result of the elections. This result is an indicator to the Kurdish movement, which even though it has always occupied a specific weight, until now it has never been an actor with actual numeric weight within the Parliament. This looks as if it is set to change. All political parties and power frameworks throughout Turkey are taking note of the Kurdish party's electoral success, and pondering how this will impact the upcoming era.

Undoubtedly, there are several different factors that have resulted in the success of the HDP candidacy. If one had to place the reasons in order, the resolution process would take precedence. The negotiations with the outlawed PKK and the movement's imprisoned leader on İmralı Island, Abdullah Öcalan, have been ongoing for the better part of two years. The "resolution process," which has become better known as the "peace process," has normalized life in both the west and the east of Turkey. The PKK's announcement of a cease-fire allowed for breathing space within the political arena. It was only with this process that the conditions for citizens to voice their political preferences openly were created. For the first time, Turkey held elections on March 30 and Aug. 10, over which guns were not looming. This milieu most benefitted Kurdish politics. In the March 30 local elections, the HDP secured mayoral seats of 11 provinces and over 100 mayoral seats in districts and municipalities, thus, becoming a key actor in local governance. In the presidential elections on Aug. 10, as a result of free and fair elections, the Kurdish movement was able to double its votes by wooing the electorate on "peace" terms.

The Kurdish movement's greatest electoral success prior to Aug. 10 was 12 years ago, where it entered the election under conditions resembling today's resolution process. In 1999, the leader of the outlawed PKK, Abdullah Öcalan, was caught in Kenya and extradited to Turkish authorities. Öcalan ordered a cease-fire, and commanded his fighters withdraw from Turkey. By 2002, provinces with majority Kurdish populations returned to a state of normality. Since then, the pressure on Kurdish politicians has been relatively lessened. In the Nov. 3, 2002 general elections, the DEHAP (Democratic People's Party) that stemmed from the Kurdish movement, secured 6.14 percent of the vote, which proved its political relevance and weight. After this election, however, Kurdish parties were unable to reach this level of electoral success again until now. A return to armed conflict after 2004 inevitably resulted in a loss of popularity for the Kurdish movement. Kurdish parties were only able to recapture the success of the Nov. 3, 2002 elections with the return of a full cease-fire during the elections held five months ago on March 30. However, the Kurdish movement was only able to overcome the psychological six percent threshold in the presidential elections held on Aug. 10.

It is evident now more than ever that the resolution process has paved the way for the Kurdish movement in Turkey. While in previous elections, Kurdish politicians were only able to campaign in a few major western provinces, during this election, they were able to campaign throughout all of Turkey, free from harassment. Identity-related prejudices and hostility built up over the years have been overcome with the resolution process. Extreme nationalism has weakened while democratic values such as respecting ethnic, political and cultural differences have gained importance under the conditions of the resolution process. The tone and aggressive language dominant during the years of conflict have been abandoned, exchanged instead for inclusive rhetoric as well as a move away from ethnicity-based politics into democratic politics, which has enabled Kurdish politicians to broaden their appeal. The media is no longer a closed avenue for the Kurdish movement, and while some elements within the media oppose the resolution process, the mainstream media has left its former habits by the wayside. Kurdish politicians are not longer introduced to the public as "terrorists," and instead, have received considerable coverage over the past two years. The interest shown towards the HDP candidate prior to the elections was very high. Undoubtedly, This media exposure has softened the atmosphere legitimizing Kurdish politicians.

The resolution process has had a serious impact on both Turks and Kurds. It is clear that the understanding of the state is changing from being ethnicity-centric to citizen-centric. Prejudices arising from different sects are beginning to fall away. As a result of these changes, Kurds are strengthening ties with Turkey to a degree never seen before. One of the most important results of the election was the weakening of separatism within Kurdish politics and the strengthening of a sense of unity.

The missing "democratic" characteristic of the Republic's founding is being completed through the resolution process. The mode of governance where Kurds and Alevis were excluded, where the pious were barred from running state affairs, and where the power rested with a monopoly by the secular elite is coming to an end. The driving force behind this historic change is the governing AK Party, who has ruled Turkey for the past 12 years under the leadership of Prime Minister Recep Tayyip Erdoğan.

Economic development and rising prosperity, the reconfiguration of the state, and adopting an active foreign policy are just some of the assertive policies that have strengthened the AK Party's government. These policies enjoy popular support, and have carried Erdoğan to the presidential seat in Çankaya. The Kurdish movement has undoubtedly experienced the changes as a result of these policies as well. However, the role and contributions of Abdullah Öcalan to the resolution process should not be underestimated.

As leader of the PKK, Öcalan issued a historic memorandum stating that "guns belong on the scrap heap" leading the way for the cease-fire, withdrawing armed units from Turkey, and allowing for a democratic political space to emerge in which the newly founded HDP can maneuver. Despite all provocations and disruptions, Öcalan has remained dedicated to peace, and contributed in preventing the process from slipping backward. During the Aug. 10 election results, Öcalan reiterated the need for the Kurdish movement to give up its armed struggle. Immediately after the elections, Öcalan released a message saying, "Negotiations as a result of this 30 year-long war are soon to be concluded," and called for the PKK to engage in civilian politics. It is evident from these statements that Öcalan has disregarded the possibility of return to armed struggle as was previously undertaken by the PKK towards Turkey in the past three decades.

The Aug. 10 election results signal that the Kurdish movement is beginning a democratic integration phase. Ties to a joint homeland have been strengthened while fears over ethnic and religious differences have weakened. The direction in which the Kurdish question turns is towards that of integration and away from separatism. While the Middle East is ravaged by ethnic and sectarian wars, Turkey is able to maintain domestic equilibrium, becoming an "island of peace" in the region.

Political power, which only recently began to address the Kurdish question through democratic and freedom-oriented principals, have shown the success of governance through negotiation, and positions Turkey a role model for the Middle East. It is highly probable that Iran, Syria and Iraq may come face-to-face when implementing such a model to resolve their own conflicts.

The election results also are the harbingers of change for the constitution brought in by the Sept. 12, 1980 military coup. Combining the 52 percent of the vote received by the AK Party on Aug. 10 along with the HDP's 9.7 percent demonstrates that both parties will pave the way for a new constitution. The governing party has already established its slogan for the general elections to be held 10 months from now in 2015: "New Constitution, New Turkey," and Aug. 10 will be known as the beginning of the era of "new Turkey."