On war and Gaza's will to resist 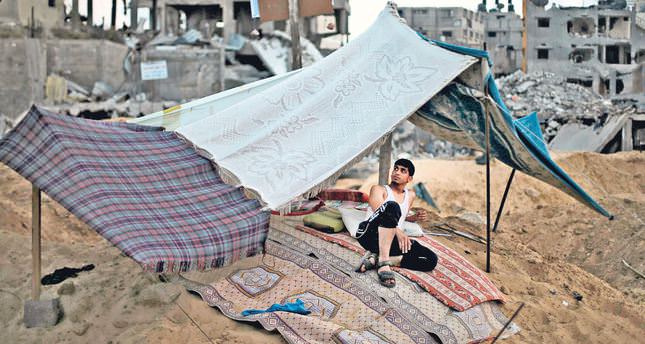 Undoubtedly, operation Protective Edge has failed to weaken Palestinian resistance against unjustifiable sanctions and violence posed upon Gaza. On the contrary, Israel's cruel treatment on Palestinians have further raised an anti-Israel stance throughout the world

Carl von Clausewitz, in his enormously influential work "On War," articulated two principle standards to measure success in confronting an enemy in a campaign: the military force must be destroyed and likewise the will to resist must be crushed.

We are certain that Israel and the Zionist Movement for the past 68 years if not longer had identified the Palestinian people, both individuals and groups, as an enemy and waged many wars to destroy its limited force and sought to crush its will to resist. From the Nakba's massacres in 1948 to the 1967 war, passing through the massive assaults on Lebanon, assassinations and continuing all the way to Rabin's policy of "force, might and beatings," Israel saved no tool or stratagem in pursuit of a mirage: crushing the Palestinians will to resist.

No one can argue that Israel's military hardware, top of the line armaments and power is far superior to that of the Palestinians in the past and at present. One has to consider that the US and European powers provide Israel everything it needs and wants in military hardware, training, funding and technology as well as their commitment to maintaining Israel's "qualitative edge" over the combined Arab and Muslim forces.

Israel's ability at destruction and spilling of innocent blood is undisputable and would be granted a nod and a World Cup if that was the measure and argument for victory in Gaza. "Blood is not an argument" nor a military strategy, but this has escaped the Israeli leadership.

After the announcement of a long-term ceasefire agreement on August 25, 2014, the door was opened for a clearer strategic assessment after Israel's disproportionate destructive campaign and endless slaughter was thrust upon the Palestinians in Gaza. "A nation is not defeated as long as its will to resist is not crushed." What did Israel accomplish? Where does the Palestinian will to resist stand today after 68 years of continued attempts at crushing it by every military means available and with a most formidable regional and global alliance serving Israel's needs?

Sound strategic analysis points to Israel's complete and total failure in achieving any measured success in the two most critical goals discussed above. Furthermore, the fact that Israel entered into this war on Gaza assuming all the initiative and strategic math totally in its favor illustrates the gravity of defeat.

Murdering 503 babies and children, 302 women, old men, ambulance and health workers, children playing soccer on the beach or at UN facilities, 17 journalists, bombing homes, hospitals, schools of all types, mosques, electric stations, water treatment plants, camels and zoo animals, and residential towers are not signs of victory or gallantry. The major questions according to Clausewitz would be: did Israel manage to destroy Palestinian forces in Gaza and was their will to resist crushed?

Israel's decision to attack Gaza was based on a profound miscalculation and self-constructed assumptions not connected to Palestinian realities. The chaos in the Arab and Muslim worlds was extrapolated into a number of incorrect assumptions about the war outcomes and a conclusion drawn based on it, but not connected to actual Palestinian internal strength and preparedness inside the Strip. In addition, there existed a self-constructed view regarding the weakness of the resistance and their inability to withstand an attack since all of the political cards were in Israel's hands from the beginning, not to mention support from key Arab allies.

The alliance with Egypt, PA, Saudi Arabia, UAE and Jordan was incorrectly translated into the magic bullet that was to force Gaza to surrender within a few days and to accept a ceasefire followed by the reintroduction of PA structure and force to the Strip. The unity agreement between Hamas and Fatah put forth a transition plan but it did not involve disarming or neutralizing the resistance; thus the attack was intended to crush and weaken the resistance before the next implementation stage of the unity government.

For sure Gaza's government was under extreme financial stress and the unity agreement was reached to facilitate employees salary payments and easing of the economic crisis brought about by the intensification of the siege. In addition, regional changes in Egypt's military coup and Syria's civil war impacted Hamas considerably and weakened its economic and political standing.

Israel started the war at the weakest stage in local, regional and global support for the Palestinians in general and Hamas in particular. A hunter moving in for the easy kill was Israel's leadership view after Gaza's population had been "put on a diet" for seven years, total air, land and sea siege as well as twice before being pummeled by military campaigns in 2008/9 and 2012; all conditions considered, this should have been an easy kill!

In the course of the war, a strategic shift occurred and the hunter lost all advantages and went on the run seeking Egyptian and US help for an early exit strategy, the initial Egyptian proposal. Simply put, Israel faced an emboldened, well-trained and strategically savvy Palestinian force, the like of which Israel had never seen before on Palestine's battlefields.

Ending rockets firing from Gaza was Israel's early expressed goal in the war which shifted to finding and destroying the tunnels, the presence and sophistication of which was a total surprise and caused the halt for the possible land invasion. In addition, the rockets never stopped, rather they demonstrated greater distance and accuracy, coupled with a most daring development of locally made drones and sniper rifles that forced a strategic balance despite the disparity of military hardware at Israel's disposal. What is clear from a strategic perspective is that Israel's military operational freedom in Gaza came to an end with this campaign.

Another more critical assessment will become more clear in the months and years to come which has to do with the total collapse of Israel's standing around the globe. In my view this collapse is irreversible and global public opinion has decisively shifted during the duration of the war on Gaza and it will not be possible to change it.

Indeed, Israel will spend hundreds of millions to prop-up the Hasbara networks, undertake massive lobby efforts to prevent criminal prosecution of its leaders and campaign to defame pro-Palestine supporters. However, Israel fails to recognize what has taken place and that its criminal conduct and actions were witnessed and internalized at every moment by a global audience. The war effects across the world can be seen in the re-emergence of a stronger and creative progressive movement, which is making BDS campaigns a focal point across the globe and linking local struggles to that of Gaza and Palestine.

Gaza's steadfastness once coupled with the total arrogance of power exhibited by Israeli leaders made for a historical epistemic shift in world public opinion and Israel's unrestrained violence including intentionally targeting children and civilians is the primary cause for this strategic swing. Israeli leadership will draw a number of conclusions; one possibility is the realization that a real end to the occupation, settlements and the dehumanization of Palestinians is no longer tenable and change must be undertaken. However, knowing the right wing coalition in power, personalities and parties at the helm of the Israeli Apartheid bus, the likely conclusion will be that not enough force was used or planning was a problem, and more force will be needed as well as a campaign of assassination and machination against the Palestinians. If this is the Israeli conclusion and I believe it will be then Israel is back at square one in attempting to shoot its way out of a serious political problem. Certainly, killing more Palestinians is not a solution and if it is pursued, then the future results will not be according to Israel's right wing strategic dreams or liking.