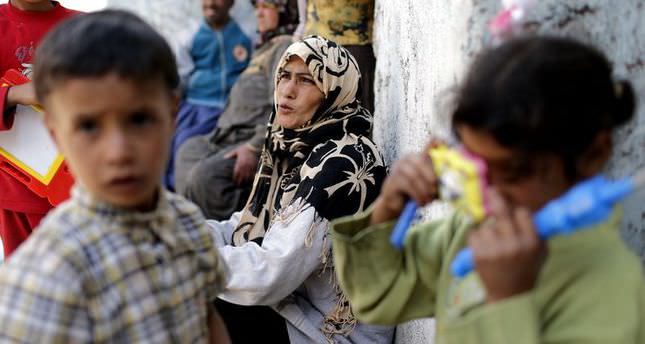 by Aboud Dandachi Sep 08, 2014 12:00 am
Throughout human history, individuals from troubled societies have sought shelter from the chaos raging in their home communities by seeking refuge in societies that have managed their affairs better, thus, were safer and more stable.

I experienced this phenomenon myself a year ago, after fleeing the conflict raging in my home country of Syria, becoming yet another displaced Syrian among the hundreds of thousands that had benefited from Turkey's generous open-door policy towards us.

Alas, any country's resources are finite, even if the capacity of its southern neighbors for ruinous, self-destructive wars seems to be infinite. No single society has the means to fix all the ills of others in the region. While Turkey has gone to extraordinary lengths in its handling of the influx of so many displaced Syrians, the Syrian refugee crisis has become a problem too big for any one country to tackle. Already one of the biggest humanitarian disasters since World War II, the exodus from Syria seems set only to worsen as the terror group ISIS rampages unchecked over much of the Levant. It is beyond the time that other countries start to take the refugee crisis more seriously than they have, by assuming some of the massive burden that Turkey has hitherto been shouldering.

Europe in particular would not be doing Turkey any favors by assisting financially or with technical expertise. By absorbing over one million displaced Syrians, who might otherwise have flooded the EU, Turkey has spared Europe a humanitarian catastrophe, one which European societies are ill equipped to handle. Were it not for Turkish hospitality, I have no doubt that I and multitudes of Syrians like me would have made their way to Europe instead.

And do not think that the Mediterranean or border barriers would have served as a deterrent. Desperate people will go to desperate measures to safeguard their families. Refugees fleeing a war are already at the breaking point by the time they reach the borders, and they will swim, climb or tunnel under any conceivable obstacle created by man or nature to reach safety.

Chaos cannot be contained, it can only be managed; and by allowing Syrians a relatively easy route to entering and living in Turkey, the Turkish authorities are able to exercise a large degree of control over the refugee crisis. As a Syrian, I can legally enter Turkey, rent a place to live, open a bank account, obtain a cellphone number and live my life undisturbed and without restrictions. I have every incentive to stay within the law of the land because the law has provided me with the means to obtain anything I may reasonably need to live my life. My activities are transparent to the state and concerned authorities.

Contrast Turkey's approach to that of the stifling restrictions imposed on Syrian refugees in Arab countries or most European ones. Where countries bar Syrian refugees from entry, those refugees find a way regardless and the authorities are none the wiser. Where refugees are confined to detention centers or camps, refugees avoid them and the host country is left with no idea on the true number or location of the refugee population within its borders.

And in those countries that deny refugees access to banking and financial services, refugees conduct their financial affairs off the books and under the table, again leaving the authorities utterly clueless as to their financial activities. It is a paradox that attempting to control and restrict the life of the individual refugee only creates the circumstances by which everyday activities are driven underground. As a result, a state's ability to monitor and control the refugee population within its borders is actually eroded.

No one expects Europe to adopt the same open-door policy that Turkey has maintained. It takes a strong and confident government to adopt such a policy, and with extreme right-wing near-xenophobic sentiments in the ascendency in much of Europe, it is doubtful whether European societies are in any condition to absorb anywhere near the same number of refugees that Turkey, Lebanon and Jordan have taken in.

But refugees with little choice will come regardless of whether they are wanted or not. In a perfect world, the turmoil in a country would be confined to that country. However, the reality is that humanitarian disasters have a way of spreading far beyond their points of origin.

The Syrian refugee crisis is here, it is a fact and it is a long-term problem that cannot be isolated or contained. Europe would be serving its own interests in partnering with Turkey to manage the crisis. Turkey has proven itself efficient and highly capable, and Europe could not have asked for a better partner.

Of course, the alternative is that European countries can try to build even higher border fences and see where that takes them.