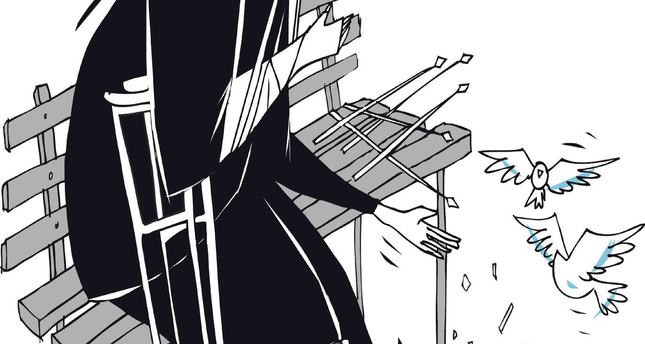 by Mohammad Pervez Bilgrami Sep 13, 2014 12:00 am
The recent airstrikes in Libya's capital Tripoli by Egypt and the United Arab Emirates (UAE), a backdrop to Israel's aggression in Gaza, didn't draw as much media attention as the temerity of their action demanded. Like the Israeli bombardment of Gaza, the UAE and Egyptian airstrikes enjoyed the covert support of Saudi Arabia, a country that is seeking to expand its regional influence in a state of confusion.

In many ways, Israel, Egypt's coup regime, the UAE and the Saudis are keen to help each other in their moments of belligerence and isolation. The foreign airstrikes in Libya in August killed at least 17 fighters and hit the Interior Ministry buildings and the installations captured by Operation Dawn, a coalition of Islamist militias and their allies from the city of Misrata.

The meticulousness of the airstrikes was clear as sophisticated foreign jets were involved in the operation. A prompt denial from NATO and its members put the suspicion on Egypt and Algeria. But later Algerian authorities categorically denied that their air force had any role in the Tripoli bombings.

After a few days, U.S. officials claimed the UAE and Egypt were behind the Tripoli airstrikes. Egypt has denied its forces were involved - reports say the bombers took off from an Egyptian airfield - while the UAE said the claims of its intervention were an attempt to divert attention from political reversals suffered by Libya's Islamists.

UAE Minister of State for Foreign Affairs Anwar Mohammed Gargash wrote in a series of tweets, which also attacked the Muslim Brotherhood, that lamented a "sister country," meaning Qatar, was spreading the Libya story.

Rebel forces from Misrata, who are now in control of the Tripoli airport, had already blamed Egypt and the UAE for the bombings. Both the UAE and Egypt's coup regime have Saudi backing for their crackdown on the Muslim Brotherhood and other Islamists, who Arab family dictatorships see as a major threat.

Israeli aggression in Gaza and airstrikes in Libya are coordinated acts by the counter-revolutionary bloc led by Saudi Arabia and the UAE to install Egypt's coup leader Abdel-Fattah el-Sissi as an indisputable master of North Africa and on the Palestinian mandate. This is the mischievous level of their wisdom that drives their bizarre policies.

Both misadventures failed miserably. In Libya, a CIA madman and renegade General Khalifa Haftar, with U.S. military and intelligence support, could not hold ground against Islamists and other militias.

In Gaza, where the Saudi-UAE-Egyptian alliance wants to crush Hamas, the world helplessly watched the slaughter of thousands of innocent civilians amid catastrophic destruction. Yet, these so-called Arab leaders are doing everything to abet more conflicts and wars. The result of Israeli aggression is that Hamas remains popular while Israel's choice for Palestinian leadership, Mahmoud Abbas, is a ridiculed figure. Abbas is employed by Tel Aviv to keep Palestinians silent against the Israeli apartheid and occupation.

Palestinians know the reality of Abbas and what he has done to the West Bank: people are routinely kidnapped, tortured and killed by Israeli security forces and Jewish settlers.

The rulers in Cairo have become a source of trouble for Egypt's neighbors. Their support for the Israeli war on Gaza is well-known. In the UAE's attack on Libya, Egypt provided an airfield near the border to aircrafts that carried out the bombing raids. But the UAE's bravery is restricted to hush-hush activities. Fearing retaliation from Libyans, UAE rulers would not even publicly admit that they decided to participate in Libya's conflict.

The UAE is an amalgamation of seven tiny kingdoms, but it has amassed sophisticated Western weapons using Abu Dhabi's oil riches. It is a leading buyer of American weapons. But the question here is why tiny kingdoms with a small native population - foreigners make up nearly 90 percent of the UAE population - want to get involved in precarious military operations.

Many fear that these airstrikes may transform Libya's conflict into a regional war, consequently inviting other regional powers to respond and thereby complicating efforts to bring peace and stability to Libya.

Maybe the UAE was trying to present el-Sissi as a man who is ready to fight Islamists both inside and outside Egypt. After toppling Egypt's democratically-elected President Mohammed Morsi and later declaring the Muslim Brotherhood a terrorist organization and killing and kidnapping thousands of Egyptians in the name of fighting terrorism (Arab leaders are quick to ape the trickery of their European colonial masters), el-Sissi now wants to consolidate his position both inside Egypt and regionally with the blessing of his autocratic brothers and Western colonialists.

It is also possible that the powers that be in the UAE made hectic decisions to make their presence felt in the region. After all, they have a lot of foreign-made military hardware in their inventory (were the pilots who flew the aircraft also foreign?).