The new Turkey with its old educational system? 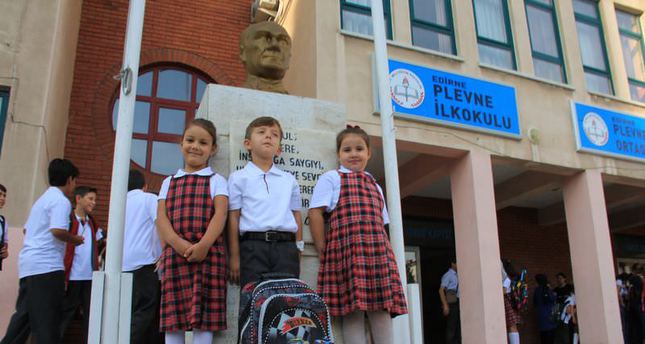 by Adem İnce Sep 18, 2014 12:00 am
I am quite sure most of you are familiar with the term "new Turkey" used by the AK Party and many commentators, especially after Erdoğan was elected as president of Turkey.It is obvious that the purpose of using this term and emphasizing it deliberately is to show that Turkey does not approach issues as it used to. It is true that Turkey has undergone a profound transformation for the last decade, with a lot of serious and necessary reforms implemented. The state paradigm has substantially altered in this period, with the effect of Kemalism and the Kemalist approach in state affairs weakened. Thanks to all these changes, Turkey is now on the verge of resolving its Kurdish issue which is considered as one of the most challenging problems in its history. However, it is worth asking that after all this radical transformation Turkey has undergone, did it really leave all of its old-fashioned characteristics in the past and enter the new era with a completely new mentality? To me, it is difficult to answer this question with "yes."

As a person researching on education, I do think that the educational system of a country gives you many clues about the dominant mentality of that particular country, as education is always at the center of governments' agendas, and it is generally used by states as an instrument to impose the main philosophy of the state on every single student through compulsory education in order to strengthen the sense of belonging and create a new generation that is aware of the values of that country. That is why education is highly politicized, and the policy-making process is very centralized in many countries, including Turkey.

When the modern Turkey was established, one of the first reforms (the Unification of Education Law) implemented was in the field of education in 1924. This was, of course, no surprise, as the Turkish educational system was designed to mold the specific type of students who were expected to be loyal citizens and fierce defenders of the new regime in the early years of the Republic. The new ideology of Kemalism (with all of its nationalist characteristics) then became the dominant ideology of the Turkish "national" educational system, and the Kemalist ideology has flourished in the educational system since then. Despite the political melting away of Kemalism under the conservative AK Party government, Kemalism still persists in some sense.

It is very unfortunate that the Turkish national educational system is still ideologically driven, with a lot of nationalist themes and concepts taught in schools.Even though the Student Pledge (Öğrenci Andı) was abolished, the existing curriculum is still very nationalistic in many ways. For example, I have recently analyzed the "History of the Turkish Revolution and Atatürk's Principles" textbooks (for primary and secondary schools) as part of my current research, and I have come up with a huge amount of nationalist concepts such as "the Turkish heroism and the great Turkish culture" and sometimes even more serious ones such as "the noble blood" that is reminiscent of racist rhetoric. Besides, there is also a strong emphasis on the cult of Mustafa Kemal Atatürk. He is, in fact, portrayed as a super hero, and his ideology, Kemalism, is taught as a system of thought every student is expected to embrace sincerely and defend fiercely. So, although critical thinking is mentioned as a significant educational attainment, it is really difficult to understand how students are expected to use this ability in such a dogmatic educational system.

Many Kurdish students feel excluded in schools, since the curriculum of the Turkish educational system only talks about Turkishness as an ethnicity, and it does not mention their culture, history, et cetera. This is actually not just about the Kurds; all other non-Turkish ethnic groups are somehow excluded within the system. What we must understand in this case is that the Student Pledge was abolished, but its spirit still remains in the curriculum because it was actually the result of the educational system designed to make everyone a Turk, expecting others to forget their own identities. The pledge used to be only a constant reminder of what was in the curriculum, and what is tragic remains that it still exists.

As a result, I suggest that rather than focusing the national exams and placement tests; we must first reform our "old" educational system if we really have a desire to see the "new" Turkey. Otherwise, it would be strange to expect people - who go through an intensively ideological and national education - to understand the meaning of the "new." I strongly believe that unless we update the ideology embedded in the existing curriculum, the old Turkey will never become old.

* Ph.D. Candidate in Sociology at the University of Leeds