ISIS: The reality we do not want to face 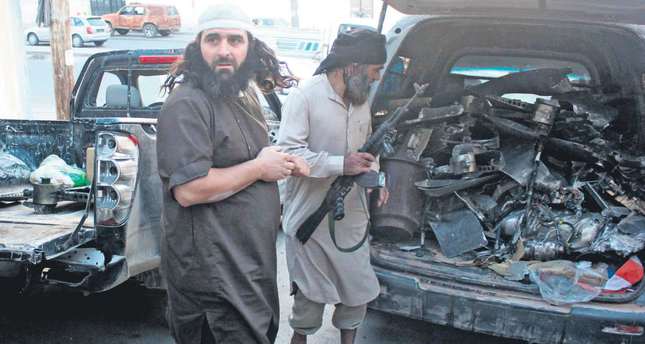 Deprivation faced by Muslims and the West's constant support of dictatorial regimes in the Middle East have led to the rise of terrorist groups like ISIS. At this point, the world can no longer ignore the social and political vulnerabilities that have nurtured misguided reactions

Is the Islamic State of Iraq and al-Sham (ISIS) real or are they in reality part of an American scheme? Where did they come from? Should we support the international coalition being formed? Is this another phase of the U.S.'s attempt to control the Middle East? Is airborne military action the most effective resort to rid us from this terrorist group or should ground troops be deployed? These are a few examples of the questions circulating in the media and among us. Questions that are undoubtedly important but do not help address the fundamental question of where do ISIS and their likes get their recruits from? I do not simply ask the question from the superficial view of are they Europeans or Arabs or are they in reality intelligence personnel gone rogue. I ask it in a deeper sense of what drives an individual to become part of such a group? What is it in our social fabric that encourages some of us to contribute to such atrocities? How are our social systems nurturing and encouraging the existence of such individuals and groups? The harsh reality that we, the global human community, continuously evade is that members of ISIS are people that were raised, nurtured and at one point of time lived among us. They are the products of our own hands. They are the result of the injustice that exists among us, our shallowness and our poor nurturing and education systems.

Social injustice leading to the formation of ISIS-like groups occurs at a number of levels in our social system. Our international political system always seems to be keen and quick to respond to threats rising from Islamic-oriented powers, while at the same time seems much more apprehensive and cautious when dealing with threats coming from other non-Islamic powers. The U.S. and the West seem to have an amazing ability in building coalitions and fronts in no time when facing al-Qaida, ISIS, Saddam Hussein, the Taliban and al-Shabab. While this ability seems to disappear in facing the Russian invasion of Ukraine, the Israeli attack on Gaza or the Chinese threat to Taiwan, somehow fighting Islamic-oriented powers immediately moves to the top of the international agenda and retaliatory action is immediate. This behavior from the international community creates a perception of alienation and generates a feeling of persecution among Muslims that in turn fuels the feeling among Muslim individuals that the world is against them and they need to fight back in whatever means possible. A similar behavior of social injustice occurs on the national level through the unjust practices of the ruling dictatorships in most Muslim countries. Whether they are monarchies or military regimes, the ruling elite in Muslim countries practice various forms of social and economic behaviors that lead to the oppression of millions and the targeted persecution of certain factions of society. With the widespread poverty among Muslim populations and the appalling state of basic national infrastructure while a few thousand people are extravagantly wealthy, Muslim nations have become boiling points waiting to explode at any given moment. If we are to add to this the inhuman targeted persecution of reformist groups and individuals such as the massacre in Rabaa Square, the torturing of activists and jailing of journalists it is easy to realize where the readiness of individuals to engage in groups such as ISIS comes from. To make it worse, the support provided by international powers to these dictatorships make it a much easier job for individuals to make the link that they are all in this together. The third level of social injustice occurs at the communal and individual level where people from different factions of society regardless of class, age, gender or employment status demonstrate various forms of unjust behavior toward each other. The policeman that kills a poor civilian in cold blood for personal reasons and is later acquitted because of his job, the businessman that scams thousands of people and flees the country unharmed, the husband that kills his wife and is acquitted because of so called "social norms" are all daily intimate examples that fuel the eagerness of individuals to seek ISIS, al-Qaida or any other similar group. In similar manners, this social injustice happens to Muslims living in non-Muslim countries. The anti-Islam campaigns often launched in cities, often meagerly addressed by authorities and the increasing number of laws being passed to limit Muslims from practicing elements of their religion, are a few examples that feed into the perception of many Muslims that they are being targeted by the rest of the world.

Having said that, the issue of perception alludes to the second key factor contributing to the creation of the ISIS phenomenon. The second key factor is the shallowness that has come to dominate our perceptions and thought processes. There is no doubt that our ability to create wellgrounded thoughts and perspectives on individuals and events have severely deteriorated. One key reason for this is the proliferation of media. There is no doubt that the media has become the key source of information for the large majority of the masses today. This fact combined with the poor performance displayed by most media outlets in communicating true and deeply thought out information has lead the masses to develop stereotypes and demonstrate a shallowness in understanding the world around them. Naturally, those in power, whether nations, organizations or individuals have come to use the media for the purpose of influencing people's perceptions and hence they are largely responsible for the resulting negative consequences. However, the more dangerous and direct consequence is that it has developed a level of superficiality among us whereby we have become exposed to being deeply influenced by any information offered through different media channels. This provides groups such as ISIS fertile ground to influence and recruit thousands of shallow minded individuals. Therefore it is important to note that the fact that most media outlets are biased and driven by specific agendas, combined with our increasing dependency on media as the key source of information, has contributed to the formation of extremist groups such as ISIS.

But this raises the question of why is it that the media has become the key source of information for many of us. I believe the answer lies in the poor state of our education systems. In order to explain this we need to differentiate between the education systems of developed and less developed countries. In less developed countries to which the large majority of Muslim countries belong, education infrastructure is in such a poor state that at least half of their populations are uneducated. I specifically use the term uneducated because they may be able to read or write, however, they lack the ability to learn. Learning involves the ability to gather information from various sources, validating the information, analyzing the information, drawing conclusions, forming hypotheses and testing them, which are skills they never acquire from the current education system. In the education systems of developed nations the case is different but still problematic. Although individuals are taught and trained about key learning skills, the systems operate within rigid curriculums that limit the space of individual creativity and instead produce homogenous behaviors and thought processes. They instruct students to go to the same sources, use the same tools and find the same conclusions. Therefore, in either case, developed or developing countries, individuals come out of the education process possessing limited abilities in gathering, validating, analyzing and deducting data. This, in return, results in our tendency to resort to whatever the media provides as information and accepting it with almost no hesitation. This makes individuals easy prey to becoming fascinated and attracted toward the seemingly untraditional ideas and opportunities offered by radical groups such as ISIS.

If the world was outraged more than 10 years ago when the Taliban destroyed the Buddhas of Bamiyan in Afghanistan, well ISIS in 2014 are beheading people and posting it on YouTube. The international coalition formed by the U.S. will not destroy ISIS as it did not destroy al-Qaida or the Taliban. These manifestations of evil are manifestations of our own world systems. Social injustice, shallowness of thought and poor education form a lethal triad threatening our social fabric. If we are not honest, persistent and brave enough to face this harsh reality by addressing the fundamental reasons behind the appearance of such groups and events, I fear the future holds for us much darker times than what we are experiencing today.