Realities behind the rapid expansion of ISIS 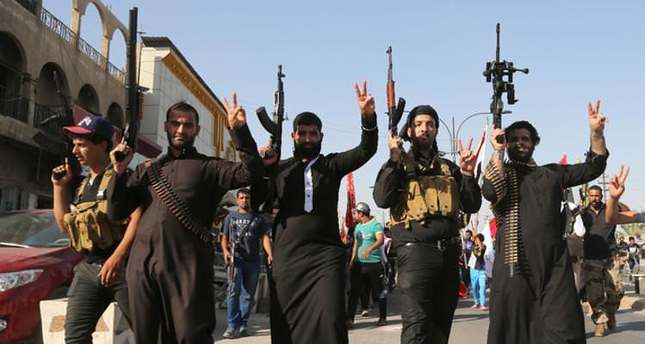 by Serdar Çelebi Sep 30, 2014 12:00 am
In order to understand what is going on around us, every little piece of evidence has to be taken into account. Armed nonstate groups, civil wars, forced displacement, hunger, the number of dead people, rape and so on, constitute the evidence. All of them together bring us to an upsetting conclusion, which is chaos. It is the only word that comes to mind when the subject is the Middle East.

The creators of today's global system will not allow small-scale countries implement their own policies in the international arena or even at the domestic level. Today's maps in the Middle East were drawn a hundred years ago in the aftermath of the collapse of the Ottoman Empire. Since then, the region became an arena for global powers.

On Sept. 17, the U.S. House of Representatives gave the authority to President Barrack Obama to arm and train "moderate Syrian rebels" to fight against the Islamic State of Iraq and al-Sham (ISIS) terrorists. Even though nobody is sure about who the moderate fighters are, the Saudi government is funding the initiative and providing training facilities in Saudi Arabia.

Despite the fact that support for the Obama administration on foreign policy issues has been very low in the Republican majority House recently, the plan passed with 273 "yes" and 156 "no" votes. The day after the vote the Senate also passed the bill of authorization for military action, which will end on Dec. 11. On the following Friday morning, French military warplanes launched airstrikes against ISIS targets in Iraq. According to some analysts, the French airstrikes were nothing more than a demonstration of political support for the U.S. efforts. French authorities also stated that the French military will not hit targets in Syria.

The coalition countries were in New York last Tuesday to attend the 69th U.N. General Assembly (UNGA). Even though we do not yet know what outcomes the U.S. expects from this meeting, Dean Pittman, the acting assistant secretary for the Bureau of International Organization Affairs - the U.S. interlocutor with the U.N. - said at the beginning of the UNGA, "I won't offer a prediction here, but I will be very surprised if we aren't all surprised in some manner, and that's really what makes UNGA UNGA."

So, what is there to expect from the U.S. bill? Should we expect the Obama administration to finally take steps to overturn the Bashar Assad regime or is it another time-saving action before Obama's term ends in two years?

As far as the public knows, there is no money attached to the bill. The Saudi government has already volunteered to train and contribute funds to approved Syrian rebel groups. According to an expert from Foreign Policy Magazine, the CIA has already been training Syrian fighters at a base in Jordan for a long time. Understandably, the efforts have not started to pay off yet. Obviously there is a broad range of people fighting against the regime in Damascus. One of them has gained strength more rapidly than the others - ISIS. Well, who are these militants? Where do they come from? According to the BBC, the group was first established in Iraq as a derivation of al-Qaida in Iraq.

A report published by the Washington Institute, the U.S.-based think tank, said that the name of the group was changed from the Islamic State of Iraq to ISIS to include Syria by the leader, Abu Bakr al-Baghdadi, in April 2013. ISIS also published a statement that they don't recognize the Iraq-Syria border, which was formed by the Sykes-Picot Agreement in 1916.

According to the same report, in February 2014, al-Qaida released a statement disaffiliating itself from ISIS. As of Sept. 2014, the CIA estimates that the group has around 30,000 fighters.

As Obama accepted on the "60 Minutes" news program that the U.S. was caught unprepared, from now on this group's expansion is unavoidable and no military solution can help the U.S. to "degrade, and ultimately destroy, [ISIS] through a comprehensive and sustained counterterrorism strategy," as Obama claims. Their territorial domination can be damaged for a time, however, as soon as the military operation ends, they are more likely to re-emerge.

We are witnessing historic events in the Middle East. Before being dragged into the chaos in the region, all possibilities need to be taken into account by the policymakers and immediate action is needed.